Those numbers stuck in my mind after a boat tour of an offshore wind farm near Copenhagen.

One percent is, roughly, is the share of global electricity generated by wind.

4.5 percent is the share of electricity in the EU that comes from wind.

20 percent is the share in Denmark, the world capital of the wind industry.

And zero? That's the number of offshore wind farms that state and federal regulators have approved for construction in the United States. The Cape Wind offshore farm proposed for Nantucket Sound has been mired in controversy for years.

What a missed opportunity.

Offshore wind farms near population centers make environmental and economic sense, industry leaders say. They reduce greenhouse gas emissions and over time will cost no more than burning coal. About 30 reporters joined wind industry officials on the tour organized by the Global Wind Energy Association, which included presentations from executives from the world's top wind power companies. As my wise-cracking friend and Greenbiz.com colleague Joel Makower noted: "This is the ultimate in spin." 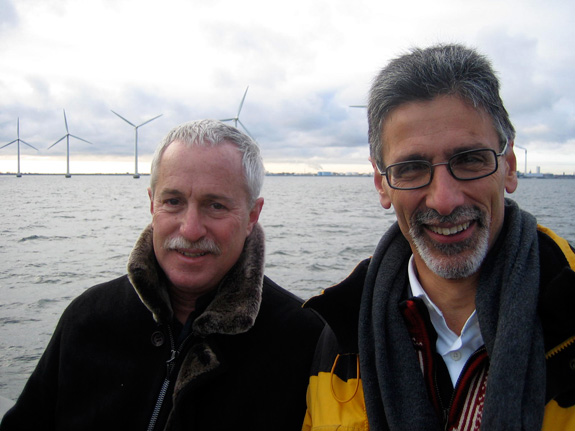 Up close and personal, the turbines are impressive. We got close:

The Middelgrunden Wind Turbines that we visited are a collection of 20 turbines, maintained and serviced by Siemens, and owned by an energy cooperative in Copenhagen and a utility called Dong Energy. They were built in 2000 and 2001 are relatively small–2MW apiece–meaning they provide electricity for about 24,500 homes. Many larger offshore turbines, built by Siemens and the Danish wind giant Vestas, have gone up since then. About 22 percent of the wind turbine in Denmark are located offshore.

"We have the largest amount of wind of any country in the world feeding into our daily operations," said Ditlev Engel, the CEO of Vestas. "No other country can beat that."

The wind industry is taking advantage of the fact that more than 20,000 people have come to Denmark this week for the UN climate negotiations to make its case that wind is the single best technology for dealing with climate change. Wind turbines can be built more quickly than new solar or nuclear plants, and they are the least expensive form of renewable energy.

The industry is already growing fast in the U.S. New wind projects completed in 2008 accounted for about 42 percent of new power-producing capacity, more than any competing technology, although the numbers will slip this year because of the financial crisis.

So what are the obstacles to more wind development? Partly they're regulatory–the not-in-my-backyard (particularly if your backyard is the ocean) phenomenon can slow wind development. Transmission hasn't been built as fast as generating capacity, making it hard to get wind-powered electricity from rural areas to cities. Policy uncertainty also comes into play–the industry has been dependent on tax credits that have come and gone in recent decades.

"The only national policy we've had in the U.S. is a tax credit that expires every few years," says Denise Bode, the CEO o the American Wind Energy Association.

I sat down on the deck of the boat to talk with Bode about all this. She's a lively advocate for the industry, a former utility regulator from Oklahoma who then worked for a national gas producers association. (Put another way, she's already made the transition from fossil fuels to renewable power.) My fingers were too cold to take good notes, but essentially Bode argues that a national renewable portfolio standard, which is part of the climate bills pending in Congress, will provide the policy certainty the wind industry needs. A standard would require that utilities get 20 percent (or less or more, depending on what Congress decides) of their electricity from renewable or low-carbon sources.

Bode is also selling "green jobs," making the case that thousands of manufacturing workers who need new jobs can find them making wind turbines. "The industry has built a huge manufacturing base in Europe, and that's what we'd like to do in the U.S.," she says.

When we talk about costs, though, things get a little fuzzy. Denmark's wind industry has boomed in part because of government subsidies. A Danish official explained to me that utilities are required to pay about 40 percent more for power from wind during the first eight years of operation of a wind farm; since the turbines last 20 years or more, that is the equivalent of a 15 percent subsidy over the life of a turbine. Other European countries like Germany and Spain, where the wind industries have grown, have similar rules, mandating that utilities pay more for wind.

But Bode argues that neither consumers nor taxpayers in the U.S. will have to subsidize wind. If that's the case, I asked, why does the U.S. need tax credits or a renewable portfolio standard? She said that utilities in states where electricity is regulated get paid a rate of return based on the costs, and so they don't have an economic incentive to bring costs down. "A renewable standard would actually save consumers money," she said.

Certainly over time the costs of wind power will come down. Offshore wind, in particular, is still a new business. Anders Soe Jensen, the president of Vestas's offshore business, says: "We need more dedicated ships. We need more dedicated people. We are on a learning curve. We need to industrialize this industry."

When I get back to Washington, I'm going to set up an interview with Bode so we can delve deeper into the economics and policy of wind (at a time when my fingers aren't frozen.) In the meantime, here's a brief video of the turbines:

Vestas: Will the Wind Business Ever Be Brisk Again?