Water agencies in regions familiar with water scarcity have experimented for years with creative ways to get their customers to use less. They've found that sometimes, nothing can incite action faster than a good old-fashioned rebate.

Who can argue with free money?

Some rebates can cover half of the cost of water-saving equipment, drastically shortening the time it will take to see a return on your investment. After that, it's more free money as businesses see those water savings go straight to their bottom lines.

At times the water saving equipment really is free. Many water agencies, for example, give away faucet aerators, which can cut water use in half. A successful program in Southern California even went door-to-door to restaurants to replace pre-rinse spray valves at no charge. Between 2002 and 2006, the program installed in the Los Angeles area tens of thousands of spray valves, each of which can cut related water use by up to 70 percent. {related_content} Your local water utility may be your greatest ally in your efforts to trim consumption, according to Bill McDonnell, senior resource specialist with the Metropolitan Water District of Southern California, which covers 26 member agencies.

"The best place to start is calling your local water agency, where they can come out and audit your facility. You don't have to stop running your business," McDonnell said. "Then what you have is information. A lot of people have no idea how much water they're using, or where it's being used."

Audits can reveal potential incentives and rebates. There is great variation in the type of rebates available, but toilet or faucet accessory retrofits appear to be the norm. Many programs, however, go much further, targeting water-saving equipment that is sometimes sector-specific, or even giving commercial customers big rewards for their water-saving performance.

Here are some top water rebate and incentive programs that caught our eye:

Say Goodbye to Your Grass, Vegas

As we reported last year, the Southern Nevada Water Authority (SNWA) pays its customers to remove water-guzzling lawns in the Las Vegas region in favor of water-sipping landscaping. By far, it's been the agency's most popular water rebate in a pretty impressive arsenal of financial incentives offered to its customers.

Roughly 143 million square feet of ornamental lawns have been converted so far, according to Doug Bennett, SNWA water conservation manager, the vast majority of it in non-residential settings. SNWA pays $1.50 per square foot of removed grass, up to 5,000 square feet. After that, the rebate drops to $1 per square foot. SNWA estimates the replacement of a single square foot of grass saves about 55 gallons of water each year.

The rebate makes great sense in a sun-parched place like Las Vegas, but the region isn't the only one offering this type of incentive. Water agencies in California, Arizona, Virginia, New Mexico, Utah, Texas, and Oregon, among other states, will also pay cash for ripping out grass in favor of water-conserving landscape.
Get Paid to Save Water in Denver

Denver Water makes businesses a deal some can't refuse: $21.50 in cash for every thousand gallons of water they save annually, up to $40,000.

The Ptarmigan building, located in the city's Cherry Creek neighborhood, received a free water audit from Denver Water that revealed its cooling tower system wasn't operating efficiently and wasting nearly a half million gallons of water per year.

That amounted to roughly $1,100 a year in unnecessary expenses. Retrofitting the towers, along with other upgrades, reduced overall consumption of the building by 5 percent, even with higher occupancy. 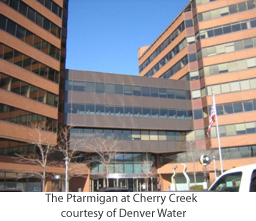 And yes, it did receive the $40,000 maximum incentive, according to Cindy Moe, Denver Water's industrial water conservation engineer.

So did Alsco. The commercial laundering company wasted about 1,000 gallons of water for each of its 10 commercial-sized washing machines because of the cold water used strictly for cooling purposes. Installing a recirculation system saves Alsco some 3.4 million gallons of water every year.

Its annual bottom line benefit: $20,000 in water and sewer bill savings in addition to the $40,000 incentive check from Denver Water.

Commercial Customers Get a Break in San Antonio

Through its Commercial Retrofit Program, the San Antonio Water System (SAWS) awards rebates on a range of water-saving equipment, including reclamation systems and cooling tower upgrades, which must be used for at least 10 years, or its lifetime. The rebate is good for up to half of the cost of the project, and is based on actual water savings, life of the equipment and price tag of the installation. 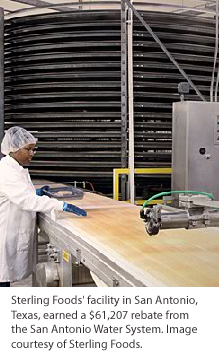 In 2009, SAWS awarded AT&T Services Inc. a $66,912 rebate toward the installation of a groundwater reclamation system that enables excess groundwater to be used for irrigation, toilet flushing and cooling tower make-up. The project will save AT&T $24,500 and nearly 5.5 million gallons of water per year, according to SAWS. The company will see a 14-year payback on its $408,072 investment, according to SAWS conservation manager Phil Weynand.

Installing a fully automated pan washing machine with a built-in recycling system netted Sterling Foods a $61,207 rebate. The project carries a 2.6-year return on Sterling's $211,000 investment. After that, the company, which specializes in baked goods, will enjoy an estimated $24,432 each year from saving nearly five million gallons of water.

Coinmach Laundry Facilities swapped 90 top-loading washing machines for high-efficiency front loaders, earning a $42,466 rebate. The company will see a 1.5-year return on its $84,326 investment, while its water consumption is expected to shrink by nearly 3.5 million gallons per year. That should save the company roughly $19,000 annually.
Chipping Away at Water Use in Silicon Valley

The Fairmont Hotel in San Jose, Calif., tapped the city's Water Efficient Technologies (WET) rebate program to help install an ozone system for three laundry washing machines last year. The $13,700 rebate helped to defray the cost of the $39,000 project that has allowed the hotel to save roughly 7,000 gallons of water each day, according to Environmental Services Specialist Alice Ringer.

The good news: the payback on the investment is instant because the Fairmont also received rebates from Pacific Gas and Electric, its local utility, because the project also saves energy.

Another company in the city, Cisco, also earned a $50,000 WET rebate to offset the $245,000 price tag to replace urinals in multiple buildings with waterless versions, saving the company 29,000 gallons per day. This project, along with a slew of other water-saving measures, such as using recycled water for irrigation and solar-powered faucets, earned the company kudos in the recent Silicon Valley Water Conservation Awards.

For more information on rebates and incentives, visit:

Save Water, Save a Buck

Cash for Killing Your Lawn: Cities Get Creative on Water Savings

Water Basics: You Can't Manage What You Don't Measure

Report Shows How Calif. Businesses Can Cut Water Use in Half