Before the game, state and federal officials showcased the stadium's operation to collect waste food from kitchens and send it for treatment at a nearby anaerobic digester. Operated by Quasar Energy at Ohio State University, the anaerobic digester is a column-shaped building that processes organic wastes. Naturally occurring microbes essentially eat the material and produce a biogas, which can be burned to make electricity or power natural-gas vehicles. Remaining solids contain nutrients that can be used as fertilizer.

FirstEnergy Stadium installed a system called Grind2Energy, made by Emerson’s InSinkErator business. Like a household garbage disposal, the Grind2Energy machine grinds up food scraps and, with the addition of water, creates a slurry. Rather than send it into the sewers, though, FirstEnergy Stadium has installed large tanks to collect the slurry, which is then collected and transported by truck to Ohio State University’s Ohio Agricultural Research and Development Center.

The Browns estimate that over the course of the season, uneaten food generates 35 tons of waste. Quasar will add dairy cow manure and potentially other sources of organic waste to the slurry and put it all into the digester. Over the course of weeks, the waste breaks down and produces biogas, which can be siphoned off and burned in a generator for electricity and heat. In a landfill, that food waste quickly would decompose into methane, a potent greenhouse gas. FirstEnergy Stadium estimates that its system will reduce the equivalent of 28,000 pounds of CO2 emissions, and generate enough electricity to power a home for a year and half. The Browns project is part of the U.S. Department of Agriculture’s U.S. Food Waste Challenge, a program launched this year to increase organic waste recycling by sharing best practices among organizations.

The cutting edge of recycling

Converting organic waste into useful products is, in some respects, the cutting edge of recycling. Municipalities have been collecting yard wastes to produce fertilizer for many years and, of course, home composting is hardly new. There are also anaerobic digesters that convert wastewater at treatment plants into energy and fertilizer. But states and municipalities, which already have traditional recycling programs in place, are stepping up efforts to collect organic waste.

A handful of states, including New York, Texas, Connecticut and Vermont, have put in place mandates that require organizations, such as hospitals and hotels, to divert some or all of their food waste. Next year, Massachusetts will be the first state to ban large businesses and institutions, such as universities, from throwing away food in landfills. In states with limited space for landfills, the reduction also helps offset the costs of sending garbage to landfills or incinerators in other states.

In the U.S., homes and businesses generate an estimated 33 million tons of food waste a year and 40 percent of food produced is thrown away, according to InSinkErator [PDF]. In a trial at Ohio State University, the company found that it’s less expensive [PDF] to divert food waste to an anaerobic digester in large liquid transportation trucks than to have it hauled to a composting facility.

The Browns, the first sports franchise to install Grind2Energy at a stadium, worked with city officials and real estate company Forest City Enterprises, which has invested in five digesters with Quasar Energy. "One of our top priorities is innovation, and this new system not only helps our stadium operate efficiently but also preserves valuable resources in our community," Browns president Alec Scheiner said in a statement. 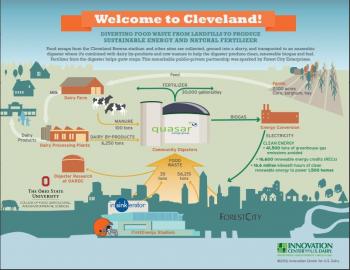 Sports and entertainment companies often work with local utilities and municipalities to organize and showcase their sustainability initiatives, said Martin Tull, the executive director of the Green Sports Alliance, a nonprofit that includes 89 teams and 116 venues. “(Sports venues) can be an innovation space. It’s still a gathering place where utilities and city agencies really want to test things out. It can demonstrate to consumers that it’s safe,” he said.

A number of sports teams have instituted recycling programs, water conservation and onsite renewable energy. This past baseball season, the New York Mets and its food services provider Aramark composted organic waste from games and donated uneaten food, too.

A nearby anaerobic digester is necessary to turn food waste into energy that can be used to make electricity and heat. But if more organizations see the potential for reducing their waste disposal costs, perhaps more municipalities will invest in digesters to recycle their organic waste.

Is IoT the missing ingredient for tackling food waste?

How Ohio State is tackling clean energy and zero waste