As we begin a new year, the outlook for 2014 looks bright. But as the polar vortex has descended upon the U.S. the last few days, we have been reminded of the past, specifically the winter of 2011 when Texas' electricity grid stuttered under the extreme cold.

Monday, as a record-breaking cold snap whisked over the U.S., the Electric Reliability Council of Texas (ERCOT), the state's grid operator, warned of possible blackouts, just as they did in 2011. We were lucky this time, but in February 2011 we were not, and blackouts occurred throughout the state.

ERCOT's warning meant that the grid's power reserves "dropped below a comfortable threshold," and the "system was just one step away from rolling blackouts" as the need for energy outpaced supply. As these blackout threats loomed, two power plants succumbed to the cold and went down. The loss in capacity amounted to about 3,700 megawatts (MW), with 1,800 MW lost due to the cold. According to Dan Woodfin, ERCOT's director of system operations, "if we had lost another unit it would have put us into an Energy Emergency Alert Three" — the stage that prompts rolling blackouts. This is unnecessary and unacceptable.

Demand response to the rescue

This sudden strain on the system comes after a recent sigh of relief that our electric grid's shortcomings are not as serious as previously thought.

During the last few years, EDF has been carefully analyzing and discussing Texas' resource adequacy imbalance — a topic we call the Texas Energy Crunch. However, when ERCOT analyzed its previous forecasts for 2013, it indicated that the energy crunch in Texas wasn't as bad as first thought, based on economic growth calculations. This news came as the PUC began deliberating whether to reform the state's current energy-only market structure to a capacity market or, as EDF is advocating, a "third way" that prioritizes demand-side resources: demand response, energy efficiency, energy storage and renewables.

Demand response (DR) rewards customers who voluntarily use less electricity at times when power supplies are tight. DR is a cost-effective technology that could play a pivotal role in ensuring resource adequacy. Right now, ERCOT predominately relies on large industrial customers for participation in demand response, but EDF intends to see residential customers reap the benefits of this innovative technology as well. Furthermore, DR is an agile resource that can readily respond during extreme weather, unlike vulnerable traditional generation, such as coal and natural gas plants. 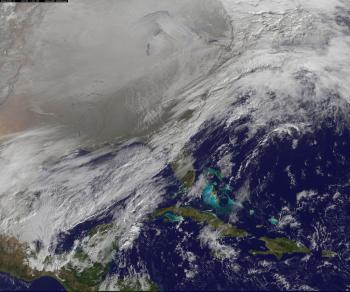 Monday morning, ERCOT called upon available demand response across the state, which helped keep the lights on. While fossil fuel plant operators claim that they are the most reliable solution for providing electricity to Texans, demand response helped the state avoid involuntary rolling blackouts. No single resource is the right answer — they all have limitations — but as we saw this time, some fossil fueled generation couldn't respond to the need when called upon.

In Texas, we worry most about the Texas Energy Crunch during hot summer afternoons. But as we're experiencing now, winter weather can catch us off-guard too — all the more reason to invest in fast-acting, flexible, clean energy resources now to protect against inevitable shocks. While we may be able to see our breath, we shouldn't have to hold our breath in hopes that our grid will make it through these events.

As climate change plays out, weather patterns will become more disrupted and unpredictable. The U.S. and Texas should prepare for more recording-breaking energy demand by investing in a resilient grid in order to withstand the next extreme weather event.

Of course, this requires Texas officials to stop denying climate change. State regulators' forecasting cannot consist of economic analyses alone; it also must include the realities of an uncertain future climate. To date, climate change has been a missing, but crucial piece to the PUC decision on market structure reform, which aims to address these problems. EDF's position [PDF] prioritizes demand response and other resources capable of meeting the challenges when needed: solar and coastal wind on a hot summer day and west Texas wind on a stormy night. In the winter of 2011, wind power helped save the day, and it looks as if demand response is having its day in the sun this year.

Why the power grid will remain reliable without coal plants