When you think of Las Vegas, bright lights and glitz probably come to mind — not exactly eco-friendly concepts. So it's somewhat surprising to learn that the city has developed into a sustainable city for meetings and events.

The Las Vegas Convention and Visitors Authority (LVCVA) touts practices including "the use of sustainable products, energy-efficient lighting, water conservation, sustainable food choices, green building, reducing carbon emissions, cleansing and recycling excess soap and shampoo for use in developing countries [through the program Clean the World] and donating extra food to food banks." That's according to Taryle Spain, director of client services.

At a destination level, significant results have been attained across several sectors.

Recycling? Check. In 2012, the Cashman Center and Las Vegas Convention Center — the third-largest of its kind in the nation — recycled a record 68 percent, or 3,288 tons, of materials. Alt-fuel transportation infrastructure? Check. About a month ago, the LVCVA introduced four electronic-vehicle charging stations to serve delegates at the convention center. Community-building? Check. Tony Hsieh, CEO of Vegas-based Zappos, seeks to turn Vegas into the "most community-focused large city in the world" (video below).

In addition, several of the city's resorts have embraced bold programs, spanning everything from building efficiency to food-waste reduction.

This isn't to say Vegas is perfect, or that there's not more work to be done. Indeed, many stats remain troubling. Southern Nevada, anchored by Las Vegas, has a peak-load electricity demand of 5,761 megawatts — about five times higher than in northern Nevada. Similarly, southern Nevada powers 103,005 commercial and street lights, far higher than northern Nevada's 45,223.

The desert city also remains water-strapped. In 2012, the Las Vegas Valley used about 108 billion gallons of water, a 1.6 percent increase from 2011. That's to say nothing of the emissions burned by the roughly 40 million tourists who travel to the city each year.

Still, it's worth noting the city's significant green-meeting strides — especially considering Vegas' towering event infrastructure and perceptions of lavishness. Here are some major hotel companies leading the charge to reinvent Sin City as a green meetings city to watch.

Caesars Entertainment owns some of the Strip's largest resorts and casinos — including Caesars Palace, Paris, Bally's, Flamingo, Rio, Planet Hollywood, Harrah's Las Vegas and The Quad (formerly Imperial Palace). The corporation launched its influential CodeGreen program in 2008. This strategy aims to minimize water, energy and waste across the global corporate portfolio, with a focus on engaging employees to drive change. To date, more than 200 banquet and meeting managers, including national sales managers, have been trained to work with planners to execute sustainable events. 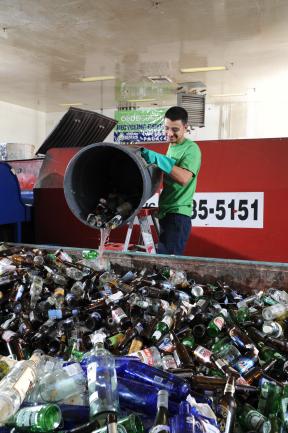 As an extra step, the company rewards employees for implementing CodeGreen measures in their homes. So far, Caesars has awarded $80,000 in reward credits to employees who have, for example, completed a home energy audit or donated fruit from their gardens to local shelters. Employees can use these incentives for gifts and trips.

The company additionally has extended its green efforts through outside partnerships. For instance, it has contributed $1.5 million to the Public Education Foundation Teacher Exchange, which connects teachers with school materials. About 400,000 pounds of recycled meeting and event materials have been donated to the foundation — reducing waste while supporting local education.

To make its case to stakeholders and consumers, the company has carefully tracked progress. It is able to tout, for example, that over the past nine years, $70 million has been invested into energy-efficiency programs at a corporate level (not including what properties have invested on their own).

While these initiatives serve the environmental cause, Gwen Migita, vice president of sustainability and community affairs, notes that it also has bolstered the bottom line and key brand values. "The learning lesson for us has been how to link sustainability back into our core business model," she said. "We recognize that happy customers are more loyal customers, so it ties into profitability."

Next on the agenda is a plan to add more electric-vehicle charging stations to Caesars' properties in major markets throughout the United States — an initiative already in place at the Las Vegas Flamingo and expanded to Lake Tahoe and Reno properties. There are 16 stations in Northern Nevada, the most in the region.

"Green Advantage is MGM Resorts International's platform to ensure that environmentally conscious decisions are at the forefront of our business operations and facilities," said Cindy Ortega, the company's senior vice president and chief sustainability officer.

Last year, 12 MGM properties on the Strip were certified into the new TripAdvisor GreenLeaders program, which assesses a holistic approach to "green" practices and ranks properties based on four levels of participation. Aria and Vdara each received a Platinum designation, the highest level and an achievement earned by less than 10 percent of participants.

Last year, the Sands Expo and Congress Center at the Venetian and the Palazzo Las Vegas became the first in the world to achieve APEX/ASTM Level 2 certification. This significant new assessment — created through a partnership among the Convention Industry Council's Accepted Practices Exchange (APEX), ASTM International and the Green Meeting Industry Council — takes into account the sustainability of nine sectors, including audiovisual, transportation, meeting space and food and beverage. While other venues have achieved Level 1 cred, Sands Corporation properties stand alone with this next-tier designation.

This achievement came on the heels of Sands' ambitious Sands ECO360° Meetings Program, which it launched in 2011 to provide holistic sustainable choices to planners. As part of the program, a "Green Meeting Concierge" serves as a planner's meetings guide and helps customize events based on specific needs. After the meeting is over, event metrics are consolidated into the "Event Impact Statement," a comprehensive report covering energy and water consumption, recycling rates and more.

Last year, the Sands Expo Center had a particularly banner year: 74,000 pounds of trade-show materials were distributed through its donation program and 680 solar photovoltaic panels were installed. GE even helped produce a custom LED candelabra bulb to produce energy-efficient lighting.

Jenny Yu, director of global sustainability for the Las Vegas Sands Corporation, said the company has reached out to stakeholders, clients and colleagues for feedback. "The sustainability movement is not by run by one property alone, but by the entire industry and community together in Las Vegas," she said. "There are some very good sustainability programs run by our industry peers on the Las Vegas Strip, and we learn from each other's best practices."

This list only touches on the work being done across Sin City. For its part, Wynn Las Vegas operates one of the city's most aggressive recycling programs (it diverts about 1,595 tons of waste from landfills annually) and offers paperless checkout. And Boyd Gaming, which operates properties including Suncoast, Gold Coast and The Orleans, recently became the first in the nation to earn LEED Silver certification for its laundry facility.

According to LVCVA's Spain, current initiatives are just the beginning: "You can be sure the creativity and innovation of the Las Vegas resort community and its allied partners will continue to develop and implement new green ideas," she said. Those ideas will continue Vegas' transformation into one of the country's more sustainable cities for meetings and events.

When it comes to sustainable hospitality, Cindy Ortega is all in

A Look at Caesar's Employee-Driven Approach to Sustainability