This article originally was published on Conservation International's blog, Human Nature, as part of the “Conservation Tools” blog series which spotlights how cutting-edge technology is helping scientists explore and protect the natural world.

At the new national park in Madagascar’s remote Baly Bay, villagers convene for an unusual festival.

At this annual event hosted by Durrell Wildlife Conservation Trust, the villagers wait for the announcement of a yearlong competition's winners. For this contest, villages are scored on the number of fires that broke out within their assigned zones and how effective their communities were at responding and controlling fire spread.

How do the villagers know when and where to respond to a fire in a 1,000 square-kilometer (almost 400 square-mile) area in and around the national park? They use intelligence from NASA satellites, via technology created by Conservation International.

Fire always has been an element of life on Earth. Yet as climate change triggers more fire seasons and deforestation and habitat degradation increase landscapes’ susceptibility to burn, it never has been a bigger threat.

Aside from their direct threat on human life, drought and fires have a detrimental impact on biodiversity. For example, Baly Bay is home to the plowshare tortoise, one of the world’s most threatened tortoises with only 2,000 left in the wild. The species’ habitat is under serious threat from fires.

In addition, fires threaten the provision of ecosystem services such as water availability, water quality and pollination. And it’s a vicious cycle; the burning and clearing of tropical forests is responsible for 11 percent of global greenhouse gas emissions, further exacerbating climate change.

Thanks to cutting-edge technology, we can detect fires and predict fire threat to prevent and respond to these fires earlier than ever — by viewing Earth’s changing biosphere from space.

CI designed Firecast to help people in remote forests make day-to-day decisions to prevent the destructive effects of fires on natural habitat and human well-being. Firecast packages intelligence from satellites and delivers it to the people who are responsible for making conservation decisions, but who do not have the technical capacity, hardware/software or Internet bandwidth to access the satellite data themselves. 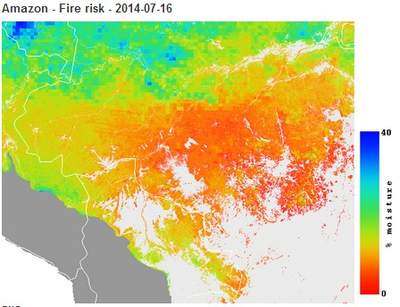 This data is then sent via daily, customized alerts to fire and forest service departments, conservation organizations, park rangers and local residents who sign up to receive the free alerts. They then use the information for various activities, including policing and enforcement of illegal activities, land-use management and implementing national policies for sustainable development.

Firecast doesn’t just monitor current fire destruction — it also can be used as a forecasting tool. It uses satellite-derived weather conditions to make predictions for where fires are likely to break out or spread. Daily and seasonal fire risk forecasts provide valuable forecasting information to decision-makers to prevent ignition and spread of fires during elevated fire weather conditions.

FAN works directly with 34 communities (about 10,000 people), teaching them the ecological, health and economic risks of burning agricultural fields during peak fire conditions. The communities have sign posts with a lever that is adjusted daily based on CI’s index of forest flammability — similar to the Smokey Bear warning system in the U.S., which assesses fire risk as low, medium or high.

Firecast is a novel system because it allows users to be proactive about fire threats instead of just reacting to fire incidents, therefore preventing deforestation, avoiding emissions and keeping reserves of some of the planet’s most valuable “natural capital” intact.

This July 16 map shows the risk of forest fire in the Amazon region due to drought conditions. Red and orange indicate an elevated threat.

NASA just gave CI a $1.1 million grant to continue development and outreach for Firecast. Over the next few years, we will enhance the user interface, provide new satellite-derived products and conduct local workshops and training sessions to build in-country capacity in using early warning systems to preserve valuable natural areas.

We highly value feedback from users and encourage anyone interested to sign up and let us know how to continue improving the system to best meet the challenges decision-makers face.

We never may be able to completely prevent deforestation and habitat degradation from wildfire, resource extraction and agricultural expansion in remote areas, but thanks to this remarkable technology, we are closer than ever before.

Joanna Durbin contributed to this report.

Better forest management won't end wildfires, but it can reduce the risks — here's how