Sorting out the competing claims regarding fracking (hydraulic fracturing) for natural gas sure is challenging.

Many energy companies' management and their trade associations repeat the mantra that there are no documented incidents of water contamination from hydraulic fracturing for natural gas.

The real story is obscured by the two sides frequently talking past one another.

For far too long, too many companies' management and trade associations have pursued a strategy of "circle the wagons and shoot the messengers," although some are finally wising up and recognizing that stonewalling is not a good strategy for building public trust. 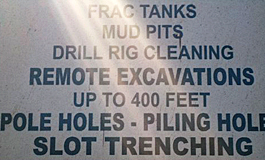 As for the community videos, the water contamination episodes are more likely the result of either drilling activities disturbing gas pockets close to the surface or faulty well construction (poor cementing of pipes), rather than fracturing as it's technically defined.

The shale itself usually is a few hundred feet thick. What happens at that depth is difficult to observe, but so far, using microseismic measurements during fracturing and on-going sampling of water wells, there is little accumulated evidence that fractures per se allow the chemicals to escape into the aquifers above.

The observed hazards are instead associated with transporting millions of gallons of water and thousands of gallons of chemicals to each well site; correctly placing pipes and protective cement in the drill hole; storing the water and chemicals that return to the surface during the fracturing process (including naturally occurring toxic chemicals in the formation that also surface during gas production); moving and treating waste waters; and managing air pollutants.

Explosions, contamination incidents, and millions of dollars in fines are clear evidence that many things can go wrong and have. Tudor, Pickering aptly characterizes the industry's "no documented incidents" defense this way: "That's useful in a lawsuit, but not in the court of public opinion."

The investors I work with bring a distinct point of view to this discussion separate from the battling armies of corporate managements and community activists. Investors look at the entire lifecycle of fracturing operations -- all the activities enabled by the availability of fracturing technology to access gas in shale formations. Investors want more information from corporate managers about fracturing's risks and rewards. Investors need assurance that company managers are reducing environmental health and business risks by addressing real operational hazards, and that they are capturing the very real business rewards flowing from sound environmental practices that lower costs and increase profits.

Companies can take numerous protective measures throughout the fracturing lifecycle to reduce hazards.

Many of these make good financial sense. They can reduce the cost of securing and moving supplies of fresh water and moving and treating waste water; prevent wasteful air emissions of valuable chemicals such as methane gas that can be sold; and reduce the amount and toxicity of chemical additives needed for fracturing to lower risks from accidents.

• Williams Companies, through a process called "green completions," captures and sells gas that otherwise would be vented to the atmosphere or flared (burned off). Green completions require investing in equipment that can be moved from site to site; EPA has estimated that green completions can pay back their costs in about one year.

• Chesapeake Energy reports it has eliminated 25 percent of the additives used in fracturing fluids in most of its shale plays.

Protective measures, even where there are not immediate, obvious dollar savings, are useful insurance. Running an extra test on cement -- to detect flaws that can allow gas to escape -- can be a relatively small price to pay when compared to the costs of contamination incidents, attorney fees, and fines. Also, testing neighboring water wells before drilling can provide protection against litigation where substantial amounts of natural gas lie close to the surface. This can be especially important in, for example, Pennsylvania, where regulations presume that contamination of a private drinking water well within a 1,000 foot radius of a new well, within six months of well drilling, is the fault of the well driller.

Tremendous innovation occurring within the energy production industry will further reduce hazards from fracturing operations. There's money to be made from greener chemical alternatives. Baker-Hughes has developed new product lines and toxicity scoring systems so that energy companies can select less toxic additives to meet their needs. Frac Tech claims its ECO-Green additives, hauled to job sites in powder not liquid form, have been "designed using principles of green chemistry." Chemicals in powder form can reduce risks of liquid chemical spills en route to a well site. Halliburton has also developed a toxicity scoring system and new product lines. El Paso used a Halliburton-developed CleanStream ultraviolet light process, instead of 2,400 gallons of a toxic biocide, to kill bacteria during a fracturing job in Louisiana. Apache Corporation technology manager Cal Cooper describes chemical reductions this way: "Basically, no one wants to pay for chemicals they don't need, and we have found that we can often replace non-biodegradable biocides with much less intrusive chemicals…"

Energy companies must not only acknowledge that public concern is legitimate, but also not wait for regulators to mandate action. A 2009 report by the Groundwater Protection Council, an organization of state regulators, concluded that "state oil and gas regulations are adequately designed to directly protect water resources," but in reality, regulators have been scurrying to catch up with the exponential growth in shale fracturing that's occurred in the last 10 years. Colorado was among the first of the states to tighten its regulations, after reconstituting its Oil & Gas Commission in 2007 to better address environmental concerns and reduce industry influence. Since 2009, amidst increasing drilling and growing contamination incidents, Arkansas, Wyoming, Pennsylvania and Ohio have tightened their controls and New York State imposed a moratorium while developing its own tightened management scheme. Even where regulatory structures have been enhanced, insufficient budgets and lack of political will can hollow out oversight.

State regulators have been increasing chemical disclosure requirements, and the Groundwater Protection Council has created a website, www.fracfocus.org, on which many companies are voluntarily listing their chemicals on a well-by-well basis. But many companies' disclosures are limited to incomplete and widely criticized Material Safety Data Sheets (MSDSs).

The gas industry continues to be divided between those who recognize the need for greater transparency about the chemicals they're using in fracturing, and those who, in the interest of protecting proprietary chemical formulas ("intellectual property"), believe in less disclosure rather than more.

The Environmental Defense Fund and Southwestern Energy Company partnered to introduce a bill in the Texas legislature that they hoped would become a national model for state legislation to close disclosure loopholes. They initially garnered support from five additional companies -- Apache, El Paso, Petrohawk, Pioneer and Talisman. In EDF's words, "These are companies that understand what it takes to earn the public's trust." After it was weakened in the Texas House, the bill gained support from six additional companies. But it was watered down further in the Texas Senate, so much so that EDF and Southwestern questioned whether the goal of full disclosure was actually being achieved.

The final legislation represented progress for Texas, but nevertheless, it appears that industry laggards still stand in the way of earning the public's trust. In the words of a Chevron executive, "We have used this ‘intellectual property' issue as a convenient excuse to move slow."

Unhealthful air emissions likely will become a more significant constraint on future natural gas development unless stronger controls are implemented, either voluntarily by the energy industry or because of regulation. In such sparsely populated areas as the Uintah Basin of Utah and Sublette County, Wyoming, regional air quality problems have already prompted drillers to implement a wide array of controls on both existing and new wells. Emissions are also an issue in the Dallas-Fort Worth area, a metropolis sitting atop Texas's Barnett Shale that violates the national air quality standard for ozone.

The price companies pay to earn the "social license to operate" is more than just the regulatory fee for a drilling permit. It also includes the very real costs companies incur when states and localities enact permitting moratoria because of the disconnect between company assurances of no problems and the reality of flaming faucets and explosions. To earn and maintain their social license to operate, companies must candidly address public concerns and describe measurable performance goals they have set and concrete actions they are taking. Companies should also acknowledge reality and report when they fail to measure up to regulatory standards; for example, Talisman posts on its website the notices of violation it receives in Pennsylvania and its responses.

Companies are getting better in reporting about fracturing operations, spurred by public outcries and shareholder calls for greater transparency. But they've got a long way to go. Developing a combination of key performance indicators and best management practices for major environmental and business risks offers a promising way forward to promote improved accountability. Forging agreement and reporting on these can distinguish leaders from laggards and sound investments from unduly risky ones.

The companies most likely to be trusted by investors and most readily welcomed by local communities will be those that:

• Have an across-the-board, transparent record of voluntary actions to reduce the quantity and toxicity of chemicals;
• Develop innovative methods for reducing use of fresh water -- for example, recycling fracturing waste waters or using saline or industrial waste waters for fracturing;
• Systematically inventory and reduce air emissions from operations, including using green completions where appropriate and substituting closed waste storage structures for open pits;
• Closely oversee their contractors to prevent shoddy well construction and demonstrate rapid emergency response capability;
• Know what's in their waste and what happens to it;
• Anticipate and respond to local community noise, road damage, and other nuisance concerns; and
• Acknowledge regulatory transgressions and lessons learned from them.

If in addressing public concerns, a company mainly replies that it complies with all applicable regulations, buyer beware:  an assertion of compliance with regulations is typically a laggard's response, signaling a lack of initiative in reducing environmental and business risks and a failure to explore the environmental and business benefits of moving beyond compliance.

The Promise and Peril of Shale Gas Fracking