The good news is that energy ministers of the world’s 23 biggest economies agree that transitioning the world to low-carbon energy is important. They launched several campaigns last week to nip global warming.

But the not so good news is that their actions, even together, are not bold enough to answer the urgency of the moment: the proximity of global temperatures to the point where severe damage cannot be stopped.

"Don’t be complacent. Don’t think you got it handled because you don’t and I don’t and we don’t," California Gov. Jerry Brown told the 23 ministers and hundreds of business and NGO leaders gathered in San Francisco Thursday for the Clean Energy Ministerial (CEM).

The 7th annual CEM did achieve several things. The ministers agreed to establish a new ISO standard for energy efficiency that, if used broadly across commercial and industrial settings across the world, could avert 6.5 million tons of carbon emissions by 2030, the equivalent of taking 215 million cars off the road.

They launched a campaign to encourage more businesses to procure renewable energy. They sparked a campaign to promote development of energy-efficient air conditioning and cooling systems that use alternatives to hydrofluorocarbons, potent greenhouse gases. (Given that global demand for cooling is expected to add 1.6 billion air conditioners to the world, this could prevent what US Energy Secretary Ernest Moniz estimated could be a half a degree of warming.)

So what kind of action were Brown — and many others — asking the world’s energy ministers and their governments to take?

"When World War II occurred, it was within a matter of days that President Roosevelt said no more cars (in production). Now we want tanks and planes — and it happened, an amazing transformation" of the economy to answer the urgency of the war effort, he said. "The challenge is that level of magnitude."

What is needed is $1 trillion a year for the next dozen years to meet the goals of the Paris Agreement.

Fatih Birol, the International Energy Agency’s executive director, pointed out that while a record $329 billion was invested in clean energy last year around the world, what is needed is $1 trillion a year for the next dozen years to meet the goals of the Paris Agreement.

Where are the policies?

Brown was not alone in pleading for bolder action. Business leaders spoke fervently for government action.

"We need the governments of the world to address climate change through careful policies that address the most critical market failures by putting a price on carbon," said Apple Vice President Lisa Jackson, head of policy and social initiatives at the world's largest company by market capitalization. "We can’t wait any longer."

She asked specifically for ending government subsidies for oil and gas. “Putting a price on carbon would be a major step in the push to help businesses make the global energy shift."

Google went so far as to say it will bring together officials from national governments, businesses and NGOs to survey existing policies and to help develop new policy to enable and ease the adoption of clean energy and low-carbon technologies.

And, notable amid the current US partisan divide about addressing climate change, some lifelong Republicans made that plea as well. Former Secretary of State George P. Schultz, who served in two Republican administrations (as President Reagan's Secretary of State and as President Nixon’s Secretary of the Treasury) advocated forcefully for national policy to place a fee on carbon. He called for a revenue-neutral tax on carbon, meaning the accumulation of fees from emitters of carbon pollution would be returned to the populace in the form of tax rebates or social security checks.

What else could be done? Days before the energy ministers gathered, the G7 agreed to end world subsidies on oil and gas by 2025. Meanwhile, Norway decided to ban the sale of petroleum-burning cars by 2025.

Money is flowing. Where from?

Money is pouring into renewable energy and low carbon technologies like never before,  with no sign of stopping soon. Bloomberg New Energy Finance said investment in clean energy is on track to reach $6.9 billion by 2030. 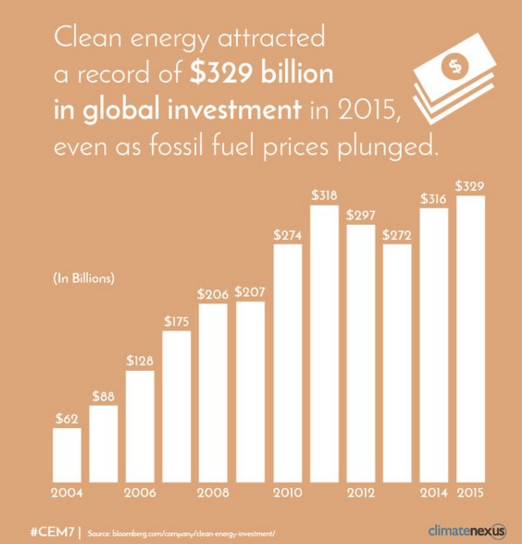 However, Bloomberg goes on to point out that reaching the goals expressed in the Paris Agreement "is a $12.1 trillion opportunity."  That's a $5. 2 billion difference from business-as-usual. It means about $1 trillion a year must be invested in new clean energy projects and electric power plants between now and 2030.

Ethan Zindler, head of the Americas for Bloomberg New Energy Finance, said in an interview that for the first time, he is seeing big pension funds and mutual funds investing in renewable energy.

"Those funds are interested in long term, steady, reliable returns such as on an operating solar project or wind project with a long term contract," Zindler said. And being typically risk averse, since they hold people's retirement money, these funds shy from smaller solar and wind projects and new technologies, but their tepid move into big projects is a good sign.

We are seeing a little more from pension funds investing directly into these projects or portfolio of projects, so that is where things are starting to get very exciting.

"We are seeing a little more from pension funds investing directly into these projects or portfolio of projects, so that is where things are starting to get very exciting because those are very large sums of capital, much larger than we have seen before,” in clean energy, he said.

IEA Executive Director Birol said that in 2015 for the first time economic growth was not accompanied with growth in carbon emissions. "There was a divorce" he said between these two trajectories that used to seem linked. The world economy grew 3 percent last year, while greenhouse gas emissions were flat.

That is important, he noted, because it boosts confidence that investing in renewables and energy innovations outside of oil and gas will spell growth, not doom. Indeed, according to the IEA, 90 percent of global investment in new energy infrastructure last year was in renewables.

Many companies now regard investing in renewable energy as a business decision that will save money or boost revenues.

Google, for instance: “We started five or six years ago because we realized it was the right thing to do,” to transition to renewable power, said John Woolard, vice president for energy at Google. As time when on and solar and wind prices plummeted, Google discovered, “It is great for our bottom line.”

It has entered contracts “at very attractive prices” and can hedge against future energy costs. “But most important is that our customers and our employees all think we are doing the right thing and they push it forward.”

But while Apple and Google have the cash flow and capital access to transition to 100 percent renewable energy, such transformative moves are much harder for medium and small businesses.

"Progress is slow," Birol conceded, adding, "It does not seem we will reach our goals" of the Paris Agreement.

There's a thornier problem: most of the clean energy infrastructure building must be in the developing world.

Bloomberg's estimate of the $12.1 trillion opportunity represented in the Paris Agreement includes that most of the investment must be in emerging markets.

"The harder thing is emerging market. They (pension fund and mutual fund investors) are now getting comfortable with solar and confortable with wind, but now we want to do it in Zambia or Morocco or wherever and there are risks associated with those countries that have nothing to do with clean energy,” Zindler said, but with political instability and lack of infrastructure.

"That is where we need the IFC (International Finance Corp) and the World Bank and OPEC to come in and frame (absorb a portion) some of those risks so private capital can do this," he said.

Access to electricity become the topic of a separate meeting alongside CEM7.

Nearly a fifth of humanity currently lacks access to electricity.  If coal-fired plants were built or even kerosene laterns continued to be the source of light for the developing countries, the world would never meet its 2 degree ceiling.

For sure, progress is being made. Solar microgrids are populating villages in Kenya and several East African countries. Mobile phone payment systems connected with household units of solar and storage are infiltrating Latin America and East Africa.

Even major projects are getting funding.  According to Bloomberg New Energy Finance, in actual dollars more was invested in the developing world last year than the developed world, which is considered a mature market.

But there's a long way to go.