Although big-name organizations such as Boeing, JetBlue and NASA are pouring hundreds of millions of dollars into electric aviation research and development, you won’t be able to fly across the United States on an all-electric commercial jumbo jet anytime soon.

That technology is decades away, and while the number of electric aircraft programs in progress around the world could hit 200 by the end of the year, only a couple of small, short-range electric aircraft designs have taken to the skies.

As more companies prepare to test prototypes by the end of 2019, three big hurdles remain: improving new technologies; navigating a lengthy and expensive certification process; and attracting (and maintaining good relationships with) deep-pocketed investors. And then there’s the obvious challenge of convincing fliers — frequent and infrequent — to embrace electric planes as ticket-purchasing passengers.

Although a day when travelers can crisscross the world in all-electric commercial jets may seem a lifetime away, roughly 45 percent of global flights are under 500 miles, putting almost half of all flights within the range of an electric motor. In a place such as the United States, where the aviation industry contributes 12 percent of all carbon emissions, that’s a big opportunity to reduce emissions.

As the regional, "middle-mile" electric aviation industry continues to pick up speed, there are plenty of near-term opportunities for airports and airline companies to move the needle on the industry’s sustainability efforts. Whether eliminating single-use plastics, investing in renewable energy or switching to all-electric on-the-ground fleet vehicles, green airports have a better chance of getting off the ground well before large-scale electric commercial aviation gets some serious wind beneath its wings.

In the meantime, here are six electric aviation companies to watch in the next 12 months. 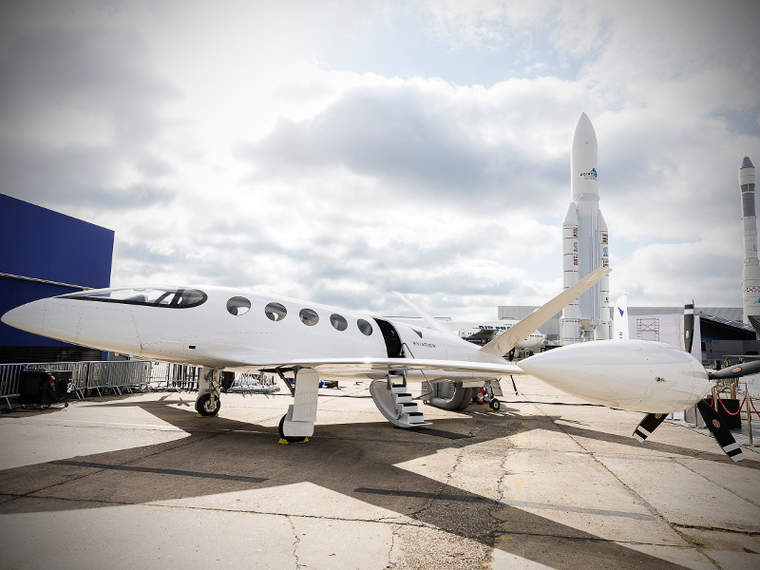 Israeli startup Eviation stole the show at the 53rd International Paris Air Show in June, when it unveiled its battery-powered, all-electric nine-seater aircraft. The first-of-its-kind zero-emission plane, Alice, was built with regional aviation in mind. On a single charge, Alice can fly 650 miles at 10,000 feet with a cruising speed of 276 miles per hour. The estimated per-hour operating cost of Alice is $165, or roughly 7 cents per available seat mile.

Even though the planes will be built from 95 percent lightweight composite materials, Eviation’s CEO, Omer Bar-Yohay, has described Alice as a "huge battery with some plane painted on it." That’s a fair assessment: The plane weighs around 14,000 pounds, 8,200 pounds of which is the battery array. The 900-kilowatt-hour lithium-ion battery can fully charge within two to three hours. In total, 164 suppliers from 21 countries worked on the Alice project, including Siemens, Honeywell and magniX, another company to watch.

Eviation is planning for Alice’s maiden test flight in late 2019, and the company is reportedly aiming for Federal Aviation Administration (FAA) certification by late 2021. Eviation, backed by the Clermont Group, already has landed a contract with Cape Air, the largest independent U.S. regional airline. In the next four to five years, the Massachusetts-based carrier plans to incorporate a yet-to-be-disclosed "double-digit" number of $4 million Alices to its fleet.

As interest around all-electric regional air travel continues to grow, Eviation is reportedly in talks with several countries and organizations interested in purchasing Alice planes, and Bar-Yohay has predicted that supply, not demand, will be the challenge for Eviation. 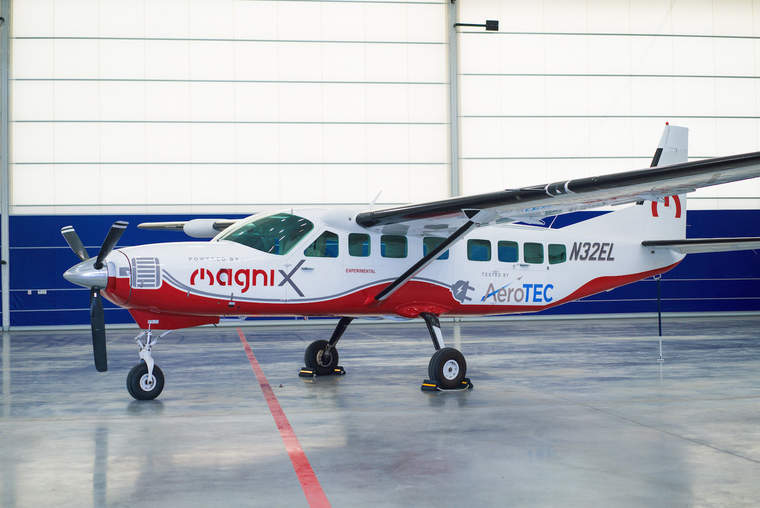 magniX
The Seattle-based company (born in Australia) has created an electric motor that is designed to be easily installed into small planes to replace conventional engines.

Whereas a number of companies are aiming to design and build either hybrid or all-electric aircraft, magniX has taken a different approach. The Seattle-based company (born in Australia) has created an electric motor designed to be easily installed into small planes to replace conventional engines. Some of Eviation’s Alice planes will carry three 375-horsepower magni250 motors developed by magniX.

Because magniX is wholly owned by the Clermont Group, the company doesn’t need to worry about raising venture capital. Besides Eviation, the company already has another major client lined up: Vancouver-based Harbour Air, North America’s largest seaplane operator. The regional airline plans to retrofit its entire fleet to run on magniX’s magni500 propulsion system. The all-electric, zero-emission magni500 is a 750-horsepower motor well-suited for planes such as the de Havilland Beaver, Cessna Caravan and Beechcraft King Air.

The converted seaplanes will have a range of roughly 100 miles, perfect for Harbour Air. Of about 30,000 commercial flights Harbour Air flies every year, the average is between 40 and 62 miles and lasts between 15 and 25 minutes. Harbour Air is planning to test out its first magniX-powered Beaver in November, and magniX is working with certifying bodies in the United States, Canada and Australia to obtain the requisite certifications by late 2021.

MagniX CEO Roei Ganzarski believes airlines such as Harbour Air would prefer to convert existing planes instead of spending millions to buy new all-electric aircraft. According to him, last year, 5 percent of global flights — not including cargo and private flights — were less than 100 miles. "All of the aircraft used for these flights are perfectly suited to conversion," he’s quoted as saying. 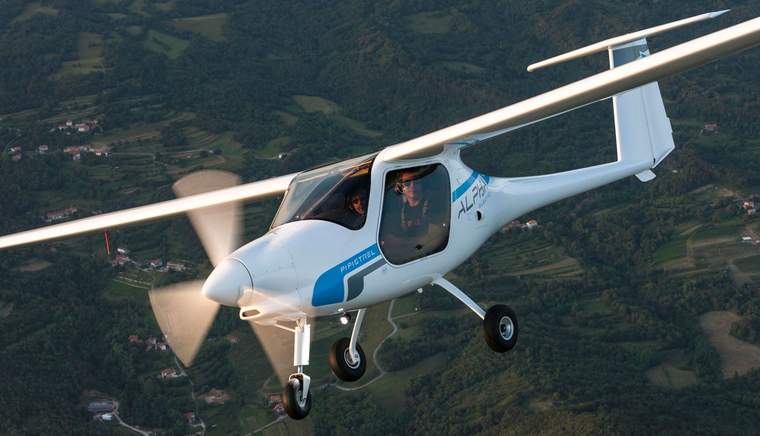 In a world full of electric aviation startups, Slovenia-based Pipistrel is a dinosaur: The pioneering company has been around for more than 30 years, and the company flew the first electric two-seater plane in 2007. By 2014, that aircraft evolved into the Alpha Electro, the first FAA-certified electric aircraft flying in the United States.

The roughly 660-pound aircraft was specifically designed for training new pilots, and each Alpha Electro costs about $140,000. For roughly $5, the Alpha Electro can remain airborne for about one hour, with a 20-minute reserve, and it takes about 45 minutes to achieve a full charge on its 220-pound 21-kWh battery.

Roughly 40 planes have been produced for Pipistrel’s customers in Europe, the United States and Australia, and earlier this summer, the company supplied the U.S. Air Force with four Alpha Electros to use for its Aviation Character Education (ACE) program. It can cost $200,000 to train a single pilot to fly solo using mainstream training aircraft; according to a Pipistrel spokesperson, ACE can train an entire cohort of 20 candidates for less than $100,000 using the Alpha Electro.

In 2017, Pipistrel sold a pair of Alpha Electro planes to the flight school at Tomorrow’s Aeronautical Museum (TAM) in Compton, California. Once TAM gets FAA certification to fly the aircraft over congested areas, TAM’s founder Robin Petgrave plans to offer flying lessons beginning at $90 per hour, per person. 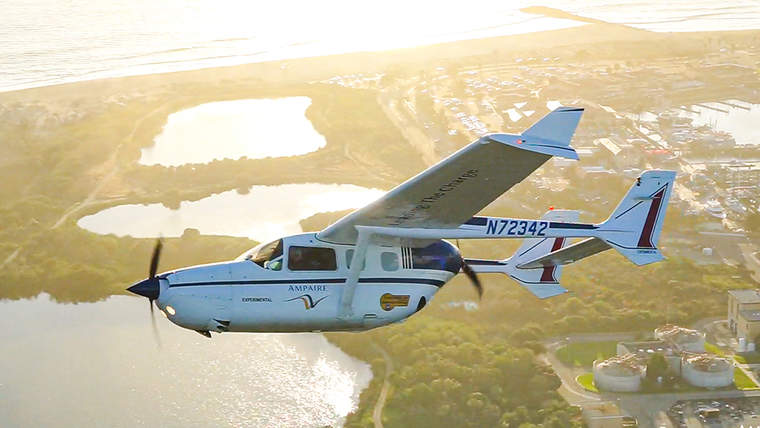 Ampaire
The EEL is a converted six-seat Cessna 337 Skymaster retrofitted with two engines that work in tandem: one conventional combustion engine and one electric motor powered by a battery-pack.

On the hybrid electric front, Los Angeles-based Ampaire is leading the charge. In June, the company publicly tested its Electric EEL for the first time, thus putting the highest-capacity hybrid electric passenger plane in the air to date.

The EEL is a converted six-seat Cessna 337 Skymaster retrofitted with two engines that work in tandem: one conventional combustion engine and one electric motor powered by a battery-pack. The EEL battery has a range of around 200 miles, and the plane’s hybrid design reportedly cuts fuel consumption by between 70 and 90 percent and reduces maintenance costs by 20 to 50 percent. Ampaire intends to retrofit more aircraft, including the Cessna 208B Grand Caravan and the Viking Twin Otter.

Over the next 30 months, the company will test the EEL in Hawaii, where the plane will fly between Maui’s main airport in Kahului and a smaller airport in Hana, a 15-minute flight away. The flight path traces a similar commercial route operated by Mokulele Airlines, which plans to retrofit its entire fleet of nine-passenger planes to run on electric power. Ampaire hopes to have its official FAA certification by the end of 2021. As of last month, Ampaire had received more than 50 EEL orders: a backlog valued at over $70 million. 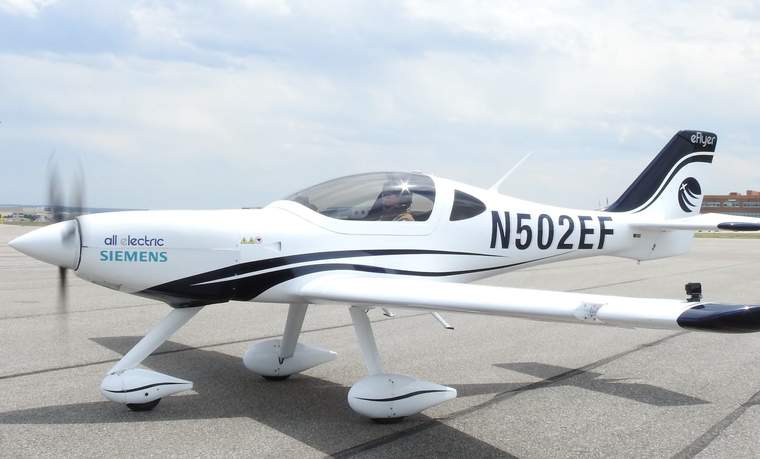 Bye Aerospace is aiming to build the first FAA-certified all-electric airplane to serve the pilot-training market. The Denver-based company flew its first all-electric test flight in 2018, and followed with successful low-power test flights earlier this year. Bye Aerospace’s two-passenger eFlyer2 and four-passenger eFlyer4 planes are equipped with 90-kW Siemens electric motors, which deliver speeds up to about 100 miles per hour. Each plane can carry 450 pounds of passenger payload for up to three hours in the air.

According to the company’s CEO, compared to the $50 per hour it typically costs to fuel a traditional training aircraft, it costs $3 per hour to power Bye Aerospace’s electric eFlyers. Therefore, the fuel savings associated with the eFlyer make it a cheaper alternative for pilots who need to accrue their requisite hours of flight time — a process that can cost wannabe pilots more than $150,000.

Bye Aerospace recently began work on a third eFlyer airplane (the eFlyerX), and the company has received more than 624 "customer commitments" for its eFlyer training aircraft. The company is aiming to have both FAA and European Aviation Safety Agency (EASA) certification by the end of 2021. 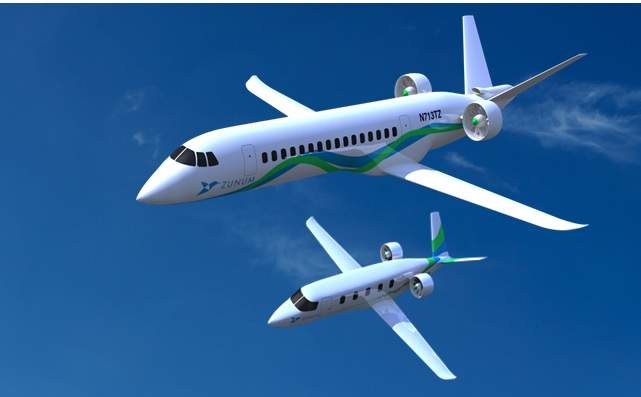 Zunum
Zunum's future is up in the air, but a fiery crash isn't inevitable.

Once a leading contender in the electric aviation race, Zunum Aero is in a nosedive. In 2017, the Bothell, Washington-based company had landed a combined $6.2 million in Series A funding from Boeing and JetBlue to build a 12-seat hybrid electric plane, and JetSuite, a regional charter airline company, said it would buy up to 100 of the aircraft and be Zunum’s launch partner.

Then, in late 2018, the startup ran out of cash, halting operations. Seventy employees were laid off, and according to former employees, Zunum gave up the facility where it was developing a high-power electric motor in Elgin, Illinois, and new tenants took over its headquarters.

However, a fiery crash isn’t inevitable. Zunum Aero’s executives are still trying to secure $50 million in Series B funding, and in June, Zunum reportedly notified Washington’s Department of Commerce, which provided the company with a yet-to-be-spent $800,000 grant in 2017, that it is working with new investors.

Get set for take-off in electric aircraft, the next transport disruption