The following is an edited excerpt of "A Finer Future: Creating an Economy in Service to Life" by Hunter Lovins, which is currently undergoing a Kickstarter campaign to aid the author in self-publishing the book.

The day dawns fine and clear. You stretch your 87-year-old bones in your bed, luxuriating in the tropical sun pouring in through the super-insulated windows in your PassivHaus co-housing unit in Indonesia. Initially designed for northern climates, the concept of super-efficient buildings has transplanted well to hot climates, with some modifications (PDF), and keeps residents comfortable year-round with only solar energy from the roofs to power it. 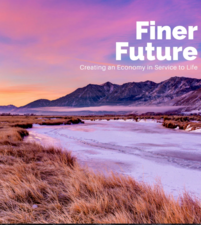 Small, but suited to your needs, your unit is part of a larger community committed to working together. This has allowed you to stay in your own home as you age, eating communally with your neighbors when you wish, but fixing your own meals in the trim kitchen when you want privacy.

You were alive in 2015 when a group of applied mathematicians released the Human And Nature DYnamical Study (HANDY) study that warns, "Cases of severe civilizational disruption due to precipitous collapse — often lasting centuries — have been quite common." Its subtitle: "Is Industrial Civilization Headed for Irreversible Collapse," crisply sets forth the thesis.

Using a NASA funded climate model, it explored the history of prior collapses to understand long-term human behavior. It did not set out to make short-term predictions, but the warning is stark: Under conditions "closely reflecting the reality of the world today ... we find that collapse is difficult to avoid.”

It described collapses due to: population decline; economic deterioration; intellectual regression and the disappearance of literacy (like in the Roman collapse); serious collapse of political authority and socioeconomic progress (repeated Chinese collapses); disappearance of up to 90 percent of the population (Mayan collapse); and some so complete that the forest swallowed any trace until archaeologists rediscovered what has clearly been a complex society (many Asian collapses).

These collapses, the study argued, were neither inevitable nor natural; they were human-caused.

These collapses, the study argued, were neither inevitable nor natural; they were human-caused. They inflicted massive misery, often for centuries following them. The study identified two underlying causes of collapse throughout human history:

These features, the study concluded, have played "a central role in the process of the collapse" in all cases over "the last five thousand years."

The study elicited reams of criticism, most posted on ideological websites. Critics objected that the study’s use of mathematical models made collapse seem unavoidable. To be fair, the HANDY authors stated, in terms, that collapse is not inevitable.

But its analysis led you to change your life. And today, in 2050, it feels very distant.

Children play outside in the central spaces, safe from cars, which, as in the early car-free city of Vauban, Germany (PDF), are banned from this and many neighborhoods. A few residents still own electric cars, although they pay handsomely for the privilege, and wonder why they do, as their vehicles reside in garages where the carshare program used to live. Now almost no one drives herself: driverless cars deliver last mile services and regional transit works spectacularly well.

Today the air is clean. When you moved here, 34 years ago, 10,000 people died each year of acute air pollution across Indonesia. The killing smoke spread across Southeast Asia from forests burned to clear land for palm oil plantations. Since Unilever and other major users of the oil shifted in 2020 entirely to algae oil, the palm oil market collapsed, except for a vibrant smallholder palm industry.

Their trees are integrated into sustainable forestry initiatives that support rural communities. Tied closely to the eco-tourism industry, this has enabled Indonesia to ensure that the once endangered orangutans and tigers have plenty of forest home in which to flourish, adding to visitor appeal. Indonesia once exported almost half of the world's palm oil (PDF). Unilever (PDF) and governments like Norway funded the creation of a domestic algae oil industry that now employs twice the number of people who once worked on palm plantations.

Today the air is clean. When you moved here, 34 years ago, 10,000 people died each year of acute air pollution across Indonesia.

A world away from your snug co-housing unit in Indonesia, New York City is settling into autumn. Arjana, a young African graduate student, steps off the electric trolley that now runs down the middle of Broadway. A few blocks north of Wall Street, an urban farm runs the length of Manhattan, and what were once concrete canyons now echo with birdsong.

It is part of a program begun back in 2016 called Growing Roots, which has created urban farms across Manhattan and now dozens of other major cities. Like your neighborhood in Jakarta, Manhattan is car-free, with space once taken up by vehicles freed for housing and local food-production.

Arjana stops to chat with the previously incarcerated young woman who is just ending her day weeding the kale patch, suggesting that they should try growing cassava.

They both laugh as Arjana hurries off to her evening classes at the Bard MBA in Sustainable Management. Sent to study social entrepreneurship and sustainable development, she is only the latest of thousands of students funded by the German Marshall Plan with Africa to study at innovative programs that teach them how to regenerate their continent so that the refugees who once fled to Europe now have a flourishing life at home.

It’s working. With stronger, locally based economies growing across the continent, the temptation for young men to hire themselves out to terrorists has declined. Renewable energy now powers Africa, and because it creates ten times the number of jobs per dollar invested than central fossil-fueled power plants, it has become the job creation engine for the continent.

Unilever and governments like Norway funded the creation of a domestic algae oil industry.

Now the whole world runs entirely on renewable energy, as Stanford professor Tony Seba predicted back in 2014 that it would. In the years following, hundreds of companies, from Google and Apple to Ikea and Unilever, led the conversion to 100 percent renewable power. They realized that failing to act on climate change exposed them to increased risks from physical disruption to financial loss.

Countries like Scotland, Costa Rica, Denmark, Dubai, Germany and Saudi Arabia followed suit. Cities joined the race. It simply was better business to shift from fossil fuels that were threatening the climate and implement the cheaper, job-creating renewable technologies.

Coupled with regenerative agriculture pioneered by the Africa Centre for Holistic Management at Dimbangombe, we are running climate change backwards. Regenerative development has not only enabled Africans to produce sufficient food for all its citizens, it is ending hunger in every country. The practice of holistic grazing actually takes carbon from the air and returns it to the soil, where it is needed as the building block of life. Coupled with the success of renewable energy, over the last 30 years, the world is beginning to cool, and the climate becomes more stable. Soon, concentrations of carbon dioxide in the atmosphere will have returned to preindustrial levels.

But you sigh deeply, thinking about just how close it was. We turned from collapse only at the last moment.

What we can do about the palm oil problem