These aren’t the happiest of times for the fossil fuel industry, and the petroleum majors in particular. The world’s largest oil and gas companies are facing strong headwinds from activists, investors and communities, pitting the companies’ relentless growth ambitions against the worsening signs of climate change.

Nothing new there: Fossil fuel companies have long had a special place in the hearts and minds of climate activists, in large part because of the industry’s dithering and obfuscating on acknowledging and addressing its substantial climate impacts. And those impacts aren’t getting any smaller.

Consider: Greenhouse gas emissions hit a record high in 2019, due in large part to the growth of oil (up 0.9 percent) and gas (up 2.6 percent) during the year, offsetting declining emissions from coal (down 0.9 percent), according to data released last week by the Global Carbon Project. This, at a time when emissions need to be plummeting in order to meet the increasingly elusive goals of the Paris Agreement.

This month’s COP25 climate conference in Madrid has shined an ever-brighter light on the oil sector’s past and future: its decades-old efforts to suppress concerns about climate change, its ambitious growth plans, the investors who fund the sector, and the impacts of the sector on the lives and livelihoods of indigenous communities around the world.

Over the next half decade, between 2020 and 2024, the oil and gas sector investments will lock in enough carbon emissions to push warming well beyond 2 degrees Celsius, let alone 1.5 degrees C.

One particular concern is the oil majors' investment plans. Over the next half-decade, between 2020 and 2024, the oil and gas sector plans to invest $1.4 trillion in new exploration and extraction. This risks locking in enough carbon emissions to push warming well beyond 2 degrees Celsius, let alone the 1.5 degrees C goal of the Paris Agreement, according to a new report by a coalition of 16 activist groups called the Global Gas and Oil Network. This would, it says, lock in 148 gigatons of cumulative carbon dioxide emissions by 2050, equivalent to about 1,200 new coal-fired power plants.

For context, global greenhouse emissions projected for 2019 by the fossil fuel industry are about 37 gigatons.

The report, “Oil, Gas and the Climate: An Analysis of Oil and Gas Industry Plans for Expansion and Compatibility with Global Emission Limits,” found that 85 percent of the expanded production is slated to come from the United States and Canada over that period. Moreover, just 25 companies are responsible for nearly half of the production created by the expansion of oil and gas drilling in the next five years. 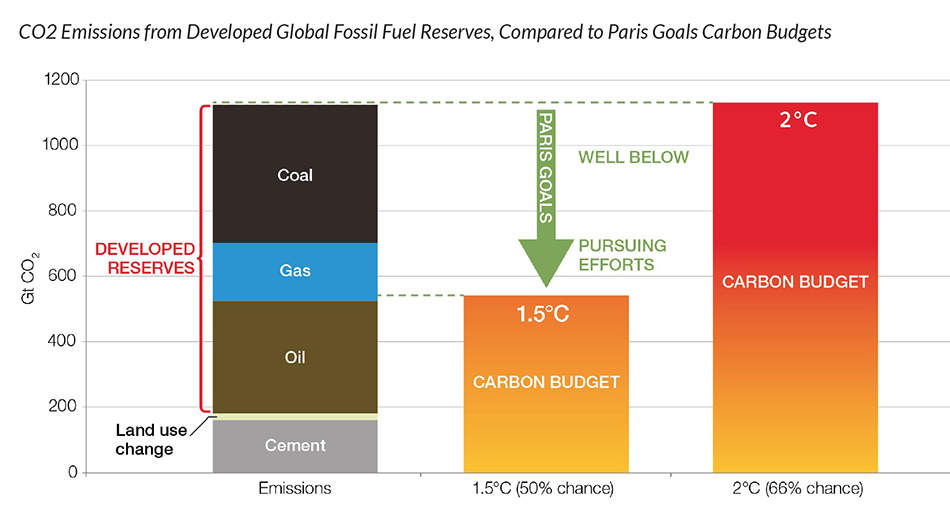 In the United States, most of that expansion will take place in the Permian Basin, the vast expanse of reserves found in western Texas and southeastern New Mexico, the world’s second-largest oil field after Saudi Arabia. The International Energy Agency predicted in 2017 that American oil — most of it from the Permian — will account for 80 percent of the growth in global supply over the next seven years.

Much of that growth has been encouraged by the Trump administration. In September, for example, the Interior Department announced it will sell leases to companies that intend to drill for oil and gas in the Alaska National Wildlife Refuge. The administration first opened the refuge to energy development two years ago, inciting widespread opposition and halting a decades-old struggle over the refuge's natural resources.

“Expanding production of oil and gas at this moment in history is like the fire department showing up with gas rather than water to save a planet on fire,” said Tzeporah Berman, international campaign director at Stand.Earth, one of the groups behind the report, and the chair of the Global Gas and Oil Network, at a news conference in Madrid last week.

The Global Gas and Oil Network report is the latest in a growing body of work and campaigns by activists to highlight the critical role of curbing fossil fuel production to limit warming to 1.5 degrees C. Most recently, the “Production Gap” report published by UN Environment Programme, Stockholm Environment Institute and others, found that national governments plan to extract 120 percent more oil, gas and coal in 2030 than is aligned with the 1.5 degrees C goal.

The Global Gas and Oil Network report points to the need for governments and institutions to follow the standard of climate leadership set by New Zealand in 2018 and last month by the European Investment Bank. This includes implementing bans on licenses, contracts and permits; removing finance and subsidies; and creating and implementing transition plans that consider the needs of workers and communities impacted by fossil fuel development.

This echoes the demands of the Lofoten Declaration, a manifesto signed in 2017 by more than 700 civil society organizations from more than 80 countries, which calls for a “managed decline of fossil fuel production.” The declaration is believed to have helped influence the government of Norway to divest from investment in exploration and production.

But that hoped-for decline in production bumps up against the still-growing global demand for oil, according to a report published in May by Barclay’s. “Oil demand has increased by 30 percent over the past 20 years, and the next 20 years are likely to prove crucial, with reliance on oil expected to peak between 2030 and 2035, if countries stick to their current low-carbon pledges, although that peak could come as soon as 2025 if the world was to increase its focus on reducing emissions.”

Advances in renewable energy, technological innovation and strict low-carbon policies will play a critically important role over the next 30 years, “but oil is likely to remain a significant part of the energy mix over this timeline,” Barclay's says.

It’s not just the production outlook that is angering activists. It is also past intransigence and obfuscation by the oil and gas sector. A wave of lawsuits against the fossil fuel industry stands to keep attorneys for both industry and activists gainfully employed for years to come. Among other things, activists and plaintiffs point to industry documents dating from the 1970s (Exxon) and the 1960s (coal industry) that predicted, with stunning accuracy, the impact of fossil fuels on the climate.

California’s and Colorado’s public pension funds together lost out on more than $19 billion over the past decade by investing in fossil fuel stocks.

So far, two U.S. states have launched fraud investigations into ExxonMobil over climate change, and one has followed with a lawsuit that went to trial in October, according to InsideClimate News. Nine cities and counties, from New York to San Francisco, have sued major fossil fuel companies, seeking compensation for climate-related damages.

Investors are stepping in, too, as the divestment movement pushes large institutional investors to pull money out of oil and gas companies and the funds that contain them. To date 1,155 institutions have divested nearly $12 trillion in assets from fossil fuel companies, according to the nonprofit website gofossilfree.org.

It’s not just on philosophical grounds. A study released last month found that the California and Colorado public pension funds together lost out on more than $19 billion over the past decade by investing in fossil fuel stocks. That study, performed by the Canadian firm Corporate Knights, called into question “whether the funds’ continued investments in the underperforming fossil fuel sector are a sound growth strategy in an age of accelerated clean energy transition.”

And then there’s the human element, as seen in communities from Canada to Peru, where activist groups are fighting oil companies — on the land and in the courts — to get them to stop drilling and mining on indigenous lands. They cite a range of health impacts from drilling and fracking, as well as the despoiling of sacred sites on which such activities take place.

(Today in Madrid, indigenous leaders from Ecuador and Peru are coming together for the first time to demand a moratorium on new industrial projects on the Amazon Sacred Headwaters, home to nearly a half-million indigenous peoples from 25 groups and nationalities, citing "indiscriminate oil drilling, mining exploration and deforestation [that] are pushing rainforest to a breaking point.")

All of this seems to be building — the disinvestment, the protests, the lawsuits and the scientific evidence — in lockstep with the realization that the keys to curbing climate change may be found less in engaging the national governments that frequent the annual COP conferences than in pressing the oil and gas giants that lurk on the sidelines of those events. And that could have implications for companies in other sectors, too, from suppliers and partners to intensive oil-consuming customers, which may find themselves facing increased scrutiny, or worse.

The oil and gas sector, for its part, doesn’t seem to be budging — much. True, many are leaning into renewables, storage, carbon sequestration and offsets, but those efforts are relatively small bets, at least compared to the trillions committed to exploration and extraction; in other words, it’s greenwash, in the eyes of activists. Meanwhile, Wall Street remains bullish on the sector when viewed through a purely financial lens. Short-term profits are likely to keep many investors’ money on the table.

Still, as concern over climate change heats up, activist pressures will surely mount. Indeed, the fossil fuel industry is unwittingly animating and activating the environmental movement, which doesn’t appear to be running out of gas any time soon.