The proposed changes would hold CAFE and GHG standards at current 2020 targets of about 35 miles per gallon (mpg), instead of the approximately 54.5 mpg 2026 standard in place. (The exact standards vary by light-duty vehicle type.)

The administration and EPA cite cost savings for consumers as the main reason they intend to roll back fuel economy and GHG standards, claiming the standard changes will provide a $2,340 reduction in the average ownership of new vehicles and a $500 billion in cost savings for the U.S. economy.

Which rules will change?

Under the current rules, if an automaker’s fleet does not meet the requirements set by the CAFE standards, it must pay a penalty of $5.50 per 0.1 mpg under the standard for every vehicle the manufacturer produced that year in the U.S. market.

The administration and EPA cite cost savings for consumers as the main reason they intend to roll back fuel economy and GHG standards.

The proposed SAFE Vehicles Rule also would withdraw the Jan. 9, 2013 waiver of the Clean Air Act that allows California to set stricter air quality standards. States may choose to follow the EPA standards or the California standards for air quality. The withdrawal of the waiver would eliminate the Zero-Emission Vehicle (ZEV) and GHG standards applicable to model years 2021 through 2025. Revoking the waiver would eliminate or reduce several other non-transportation related air quality standards in California as well. However, several states have joined with California in opposing revoking the waiver and have promised to also file lawsuits preventing the rollback of the CAFE standards.

Navigant Research’s newest Electric Vehicle Research Service report, "EV Geographic Forecasts—North America," examines how the proposed CAFE and ZEV changes will influence EV adoption in the United States and Canada. The report estimates that rolling back the CAFE standards to 2020 levels will produce only a 5 percent difference in PEV sales by 2027. Eliminating the ZEV mandates as well would produce a 7 percent difference in PEV sales by 2027.

The proposed changes certainly would influence PEV sales, but they would not signal the end of the market. Regardless of the scenario, the growth rate for light duty PEV sales and population is expected to continue increasing across the forecast period. 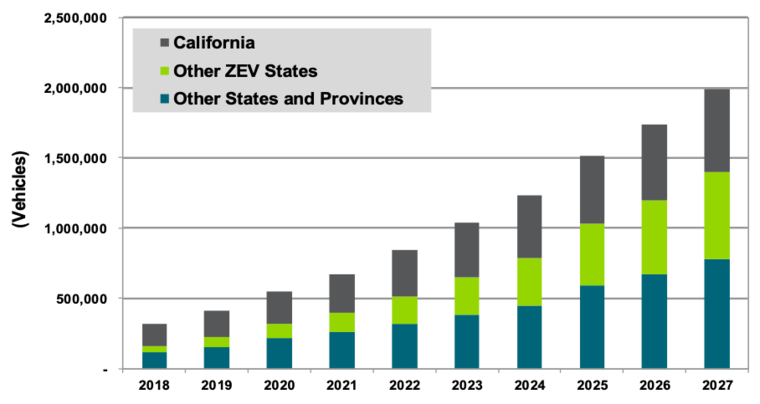 Other large markets are sticking with established standards

One contributing factor to the seemingly low impact of the proposed EPA changes are the emissions and fuel economy standards in place in other large markets.

In European markets, the 2021 average fleet fuel economy standards are set at 95 g/km of carbon dioxide (CO2), or about 57 mpg. China, the United Kingdom, France, India, Norway and several other countries have committed to banning the sale of gasoline and diesel vehicles or to setting official targets for PEV sales in the next couple of decades. Oslo, Madrid, Hamburg, Paris, London and many other large cities have pledged to reduce the number of diesel cars allowed in and around their streets and central cores. In London’s case, owners will be charged a per day fee for driving into the city during peak hours.

While the United States is a sizable market for vehicle sales, manufacturers will continue to make vehicles that meet standards elsewhere in the world. Some models that are big sellers in the U.S. market, such as pick-up trucks, may only meet the U.S. fuel efficiency standards, but automakers will continue to build models that meet the high-efficiency standards to sell globally.

Automakers such as Volvo already have made commitments to produce only hybrid and electric cars within a decade. Because most new vehicle designs take up to seven years to finalize, automakers already have spent hundreds of millions of dollars in setting up production for the PEVs set to go on sale in the early 2020s. It is too late and too costly to cancel production now.

Additionally, factors such as the emergence of long-range (200 mile-plus) battery EVs (BEVs), the continued advancement of PEV technologies at lower costs and the development of automation significantly will influence the continued adoption of PEVs. Long-range BEVs will help to quell range anxiety, and decreasing costs of PEVs will increase the number of consumers to which they appeal. Higher ranges and lower price points, combined with an automated future, ensure big changes will occur in the light-duty PEV market in the years to come.

The ZEV mandate elimination will not be the end of the PEV market. ... The most likely result is that vehicles may be produced in smaller batches or offered in fewer states.

Finally, the ZEV mandate elimination will not be the end of the PEV market, either. Without the ZEV regulations, the financial penalty incentive no longer acts as a pressure on the market. The most likely result is that vehicles may be produced in smaller numbers or offered in fewer states. Customer satisfaction with PEVs is generally much higher than with combustion engine vehicles. Automakers eyeing Tesla’s sales success are recognizing (somewhat begrudgingly) that there is a market for EVs that they need to address.

Navigant Research anticipates that even a removal of the ZEV mandates in the United States would not decrease annual sales, but it would slow the rate at which the PEV market grows.

Onlookers will have to wait to see what official changes the EPA makes to the CAFE standards. They will also have to wait for the outcome of the litigation over the revocation of the California waiver, which is likely to be drawn out beyond the term of the current administration.

Regardless of the outcome and of continued efforts by the Trump administration to loosen regulations on fuel efficiency and GHG standards, Navigant Research expects the PEV market in North America to continue growing steadily over the next decade.

Get Ready for New Auto Mileage and Emissions Rules