This year’s United Nations Climate Change Summit (COP25) opened in Madrid against a backdrop of mounting urgency. In the last 12 months, the U.N.’s climate science body, the Intergovernmental Panel on Climate Change (IPCC), has issued two special reports raising stark warnings of the risks climate change poses to food security and the oceans.

Globally, public concern about climate change is increasing and has generated new forms of protest movements in some countries, most notably Extinction Rebellion, which has groups in 72 countries. Its tactics of nonviolent civil disobedience to galvanize engagement with the climate emergency mark a departure from the environmental protests of recent years.

The participation of millions of school children in organized "climate strikes" is equally remarkable. On the second global strike in September, children were joined by adult workers; organizers estimated that protestors numbered 4 million from 163 countries.

Meanwhile, a quiet revolution has been taking place within the energy sector. When governments gathered 10 years ago for their first (unsuccessful) attempt to secure a global climate deal at COP15 in Copenhagen, there was only 25 gigawatts of solar power capacity worldwide.

Today, that number has grown 25 times to 638 gigawatts. Globally, more renewables have been installed than fossil fuels: 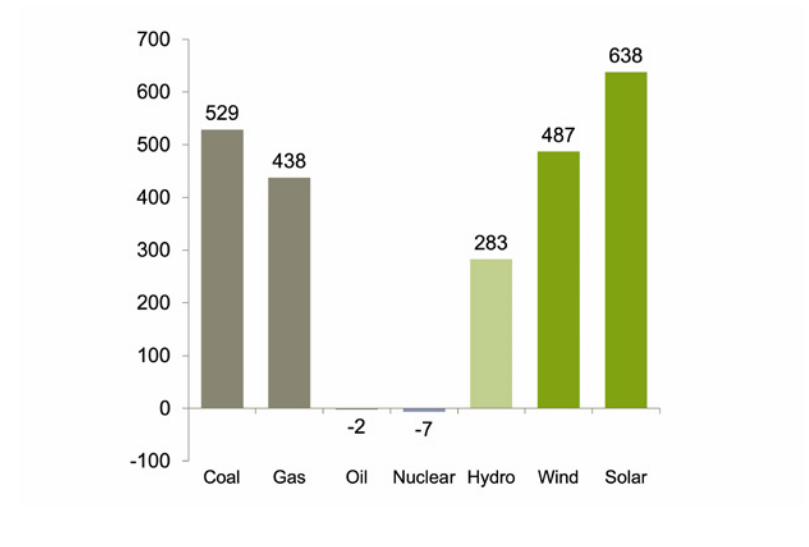 The march of renewables began with governments subsidizing wind and solar energy to help decarbonize their power sectors, and it gained further momentum as awareness of coal’s impacts on air quality and public health have grown.

Renewables’ growth is a simple case of economics. As wind and solar energy have been deployed at ever greater scale, their costs have fallen precipitously. According to Bloomberg New Energy Finance, the all-in costs of solar photovoltaics (PV) have fallen more than 80 percent since 2009; onshore wind costs have dropped by almost half. This means that two-thirds of the world’s population live in countries where new renewable generation should be cheaper than new fossil fuel generation.

This progress is borne out in the results of the 2019 World Energy Trilemma Index, a collaboration of the World Energy Council with Oliver Wyman, which measures countries’ progress on improving the security, equity and sustainability of their energy systems. At the global level, sustainability has improved markedly faster than either security or equity over the last decade: 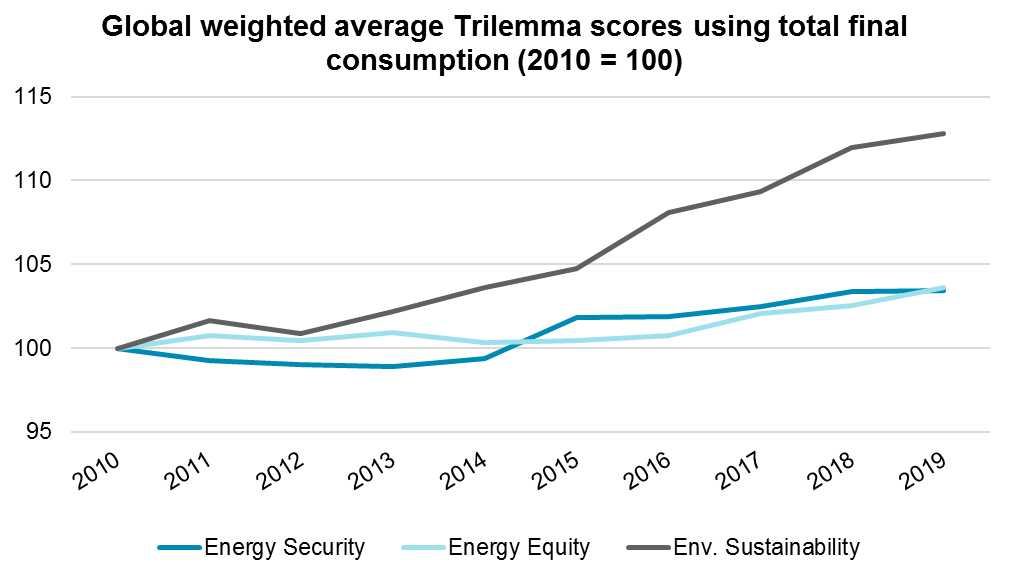 This suggests that the Copenhagen summit, at the time viewed as a huge disappointment, may not have been the complete failure many supposed. Although the conference failed to deliver a new international climate accord — we had to wait six more years, until COP21 in Paris, for that — it did lead to governments tabling new emissions reduction pledges and starting to implement accompanying policy measures.

Much more to do

However, as governments return to the climate negotiating table in Madrid, they cannot afford to be complacent.

While the collapse in the cost of renewables means the trade-off between equity (affordability) and sustainability is becoming more manageable, it has yet to disappear completely. As intermittent renewables become more dominant, other "system" costs increase — notably the costs of balancing grids and connecting the new sources of generation.

For example, Sweden and Denmark, which have some of the highest rates of renewables penetration and are among the top-performing countries on sustainability, have much less impressive equity scores. Managing this tension will be a priority for governments as the energy transition proceeds.

While the progress of the last decade has been remarkable, it has not been remarkable enough. Power sector emissions have continued to climb since 2009, despite the pivot to renewables. In transport, the shift to electric vehicles has just begun, and transitions for heavy industries and heating have barely begun. Overall energy sector emissions are likely to close the decade around 17 percent higher than they were in 2009.

To keep global temperature rise below 2 degrees Celsius — the goal of the Paris Agreement — global emissions need to peak immediately and decline rapidly to net zero by around 2070. To keep temperature rise below 1.5 degrees Celsius — the threshold needed to avoid the most dangerous impacts of climate change — net zero must be reached by mid-century.

Closing the gap between what governments have pledged and what is required to meet the Paris Agreement’s goals will be a key concern of negotiators as they gather in Madrid.

The ‘big 3’ need to move faster

The top 10 emitting energy sectors account for almost three-quarters of global energy emissions. Unfortunately, sustainability scores among this group are not especially high. In 2019, only the European Union, United States and Japan had sustainability scores higher than the average country.

It is more encouraging to look at the largest emitters’ recent progress. Over the last decade, most have managed to improve their sustainability scores by more than the average country (see chart below). Particularly notable is China, which is not only the world’s largest emitter, but also the world’s leading market for renewables investment.

However, the latest data on renewables investment indicate that this progress is slowing.

Renewables investment in the "big three" markets of China, the United States and European Union has declined in 2019, a consequence of renewables’ increasing competitiveness leading to the withdrawal of subsidies. 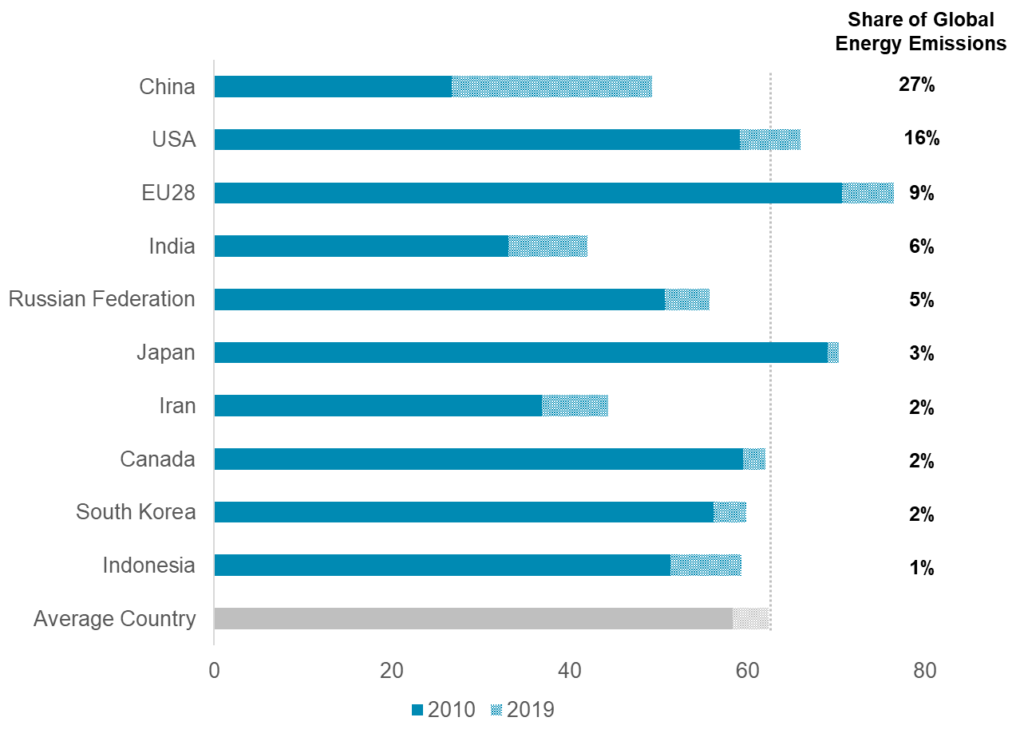 Will governments reverse the slowdown?

All of this spells uncertainty for the energy sector. The growing emissions gap and slowdown in renewables investment implies that government policy will need to tighten, yet in the largest energy sectors, policy seems to be heading in the opposite direction.

Will governments implement new policies to reverse the slowdown in renewables investment, close the emissions gap and get on track for 2 degrees Celsius? And if so, will this happen in a coordinated fashion, with clear policy signals and well-planned interventions? Or could mounting climate impacts and public concern reach a point where governments are forced into more drastic interventions that end up increasing costs and stranding high carbon energy assets?

The energy transition must continue, but whether it will be smooth or more disorderly remains to be seen.

COP25 and the tyranny of low expectations