The United States has led the world in establishing standards and regulations governing vehicle fuel economy, tailpipe emissions and safety. Over the past 50 years, these policies have made the world cleaner and safer. Now the Trump administration is moving to freeze fuel economy and tailpipe emission standards for new cars, instead of carrying forward with the latest round of improvements mandated under President Barack Obama.

At Ohio State University’s Center for Automotive Research, we work with manufacturers and U.S. government agencies to reduce vehicles’ environmental impact and enhance their safety, intelligence and autonomy. This industry is undergoing epochal changes as it works to evolve into a connected, shared and automated mobility enterprise, to address growing congestion in an increasingly urbanized world and to improve safety and fuel economy.

This revolution is the greatest disruption in this industry since the automobile was introduced at the turn of the 19th century. In my view, shared by major automobile manufacturers, the Trump administration’s position is at odds with significant investments and progress that the industry has achieved over the past half-century. 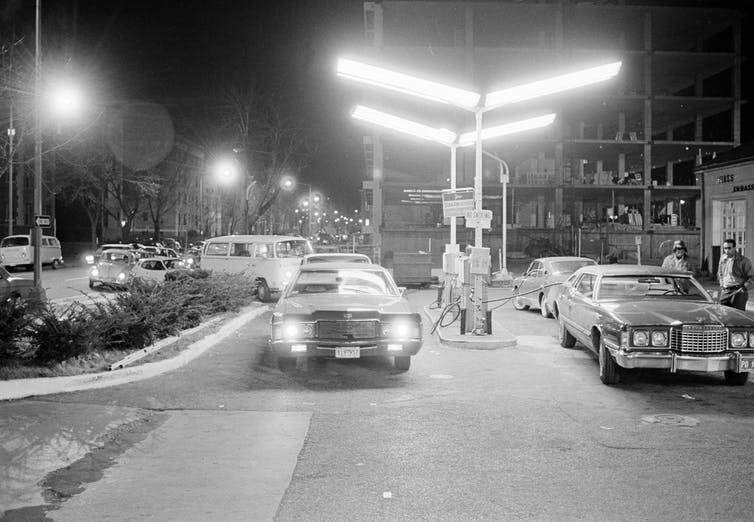 Harvey Georges
Cars line up at a Washington, D.C., service station on Dec. 1, 1973, during an export embargo by oil producing countries. The embargo caused gasoline shortages and spurred action to improve the fuel economy of U.S.-built cars.

The Trump administration’s proposal (PDF) repeats a long-standing argument that tightening fuel economy requirements will make vehicles less safe because manufacturers will comply by making vehicles lighter. In fact, the U.S. auto industry widely has employed alternative materials, such as high-strength steel, aluminum, magnesium, plastics and composites, to help improve fuel economy for many years, along with many other technologies related to engine, transmission and hybrid-electric powertrain technology.

Even though the average size of vehicles in the U.S. fleet has increased, average vehicle weight has remained constant for the past 15 years, while fuel economy has improved considerably. Automakers still have to comply with crash worthiness ratings set by the National Highway Traffic Safety Administration. There really is little or no correlation between vehicle safety and fuel economy. As recent crash test results show, fuel-efficient cars can achieve excellent safety ratings. 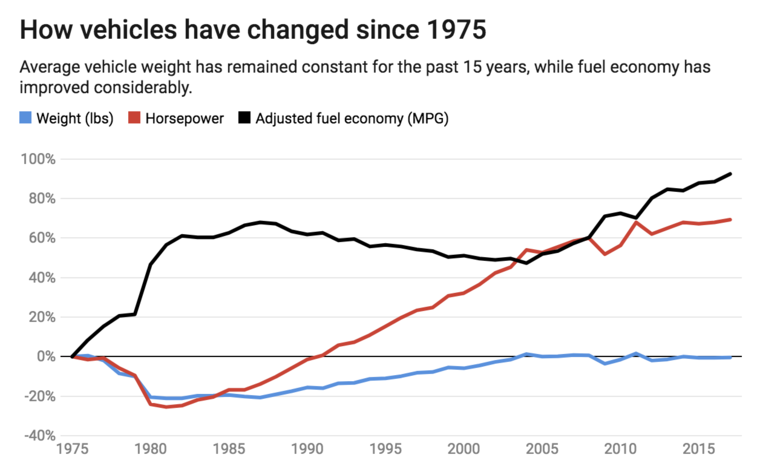 This argument is demonstrably wrong. Annual vehicle sales in the United States since 2009 — the lowest year in vehicle sales since 1982 — steadily have increased, from 10.4 million in 2009 to over 17 million in 2015-2017. Penetration of vehicles with improved fuel economy and safety over the past decade has been tremendous. Over 80 million new vehicles have been purchased in the last five years, representing more than 25 percent of the U.S. vehicle fleet.

Progress on fuel economy and safety

In an eloquent 1970 article, Caltech chemist Arie Jan Haagen-Smit — a pioneer in air pollution research — made a strong case for setting federal air pollution standards. Since then, decades of research by government and industry have made cars in the United States dramatically cleaner and safer.

The National Highway Traffic Safety Administration (NHTSA) ensures that all new vehicles and certain categories of vehicle equipment comply with federal safety standards. It works to increase the fuel efficiency of cars and trucks, both to help consumers save money at the pump and to reduce carbon pollution that contributes to climate change.

NHTSA was established by the Highway Safety Act, spurred by consumer advocate Ralph Nader’s 1965 book "Unsafe at Any Speed: The Designed-In Dangers of the American Automobile." Nader’s best-seller denounced the auto industry’s lack of commitment to produce safe vehicles and identified a government role in promoting vehicle safety.

Congress viewed fuel economy regulations not as a tailpipe emission concern but as an issue that affected vehicles’ cost of operation.

In recent decades NHTSA has issued regulations aimed at preventing accidents, including requirements for anti-lock brakes and electronic stability control systems. The agency has worked systematically to make vehicles safer, not just by ruling on their crashworthiness, but more importantly by promoting the use of crash avoidance technology. As the industry increasingly focuses on automated vehicles, NHTSA rulings and regulations are likely to continue to develop in that direction.

Interestingly, NHTSA is the agency that maintains fuel economy standards, rather than the EPA. This indicates that Congress viewed fuel economy regulations not as a tailpipe emission concern — although fuel economy is directly correlated with carbon emissions — but as an issue that affected vehicles’ cost of operation.

Competing in a global market

Current CAFE regulations, modified by the Obama administration in 2012, require continuous improvements in fuel economy through 2025 to reach an average fleet fuel economy of 54.5 miles per gallon. They are indexed based on vehicle footprints so that larger vehicles, such as sport utility vehicles and light trucks, are not subject to the same requirements as smaller passenger cars.

Automakers receive credits for vehicles that run on alternative fuels or electricity, but the regulations are not about electric vehicles, which represent a minuscule fraction of the current market. One way manufacturers can meet the new regulations is by adopting hybrid-electric powertrains. Other options include advanced 9- and 10-speed transmissions and innovative engine technologies, such as direct injection and turbocharging.

All of these technologies are increasingly present in the U.S. vehicle fleet. Fuel economy regulations have helped to ensure that the United States remains a technology leader and can effectively compete with automakers in Europe and Asia. 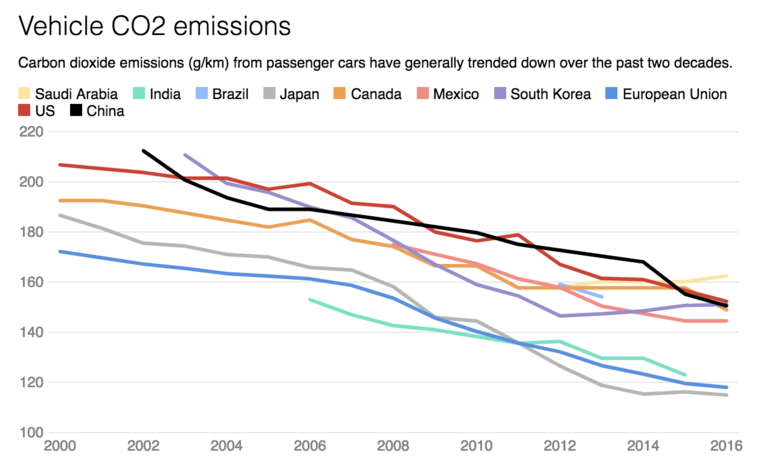 In 2016 NHTSA, the EPA and the California Air Resources Board performed a midterm evaluation of these regulations to assess their effectiveness and determine the incremental cost of such regulations to the automotive industry, and hence to consumers. It drew on a 2015 study by the National Academy of Engineering that provided a comprehensive assessment of technologies to improve fuel economy and related implementation costs.

This report concluded that by adopting global platforms, major automobile manufacturers have achieved economies of scale in the introduction of new technologies. It recommended quantifying the estimated cost to manufacturers of adopting various technologies in terms of dollars spent to increase fuel economy by a given percentage — in other words, linking increased product cost to savings at the fuel pump. In many cases, when the cost of the technology is amortized over a period of three to five years, these savings outweigh the costs. 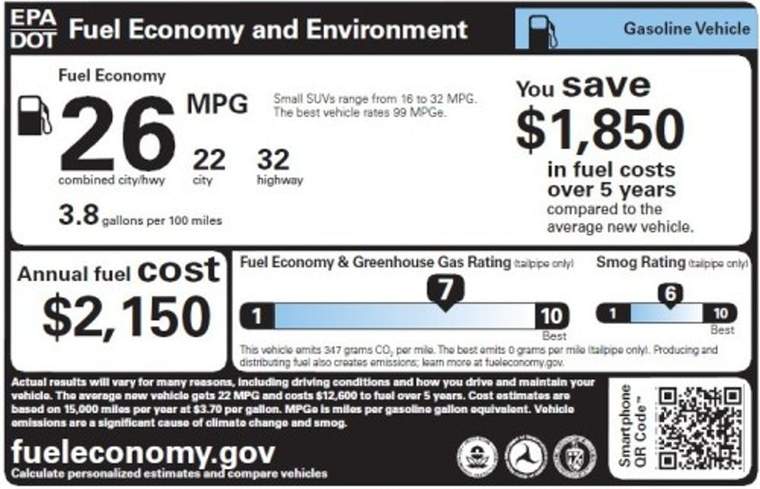 The United States is not the only market for U.S. automakers. All major automobile-manufacturing regions in the world have enacted comparable fuel economy regulations, expressed in terms of carbon dioxide emissions at the vehicle tailpipe in grams per kilometer traveled. The European Union, China, Japan and South Korea also have required manufacturers to make vehicles progressively more fuel-efficient, although U.S. standards are somewhat less stringent due to the larger average vehicle size in the North American market.

The auto business is a global industry in which manufacturers sell similar products on multiple continents through the use of global platforms. U.S. automakers want consistent standards so they will not have to incur the cost of designing and producing vehicles that do not have global marketability.

The regulations that the Trump administration wants to freeze are aligned with this principle, and are also consistent with the U.S. auto industry’s desire to retain its technology leadership position in the global market.

Get Ready for New Auto Mileage and Emissions Rules