Whether you are an eco-tourist who has snorkeled, an avid SCUBA diver, or someone who has enjoyed the ocean while watching nature shows from the comfort of your home, you are aware the coral ecosystem is beautiful and complex.

You may also be aware that most coral ecosystems across the planet are in danger from global warming, tourist traffic, and damaging fishing techniques. 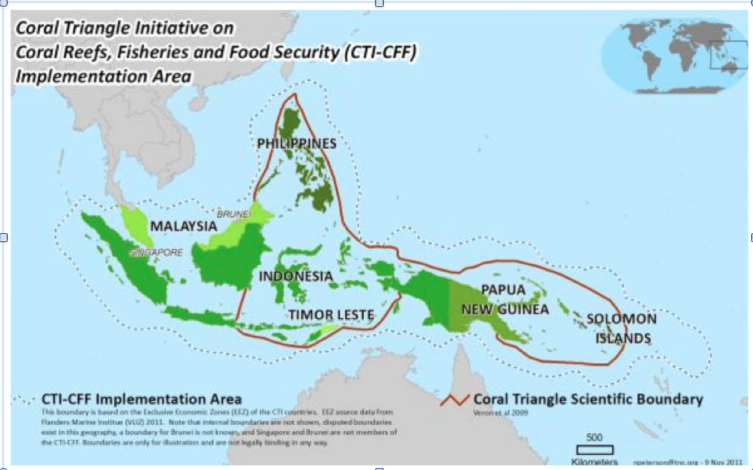 Due to the need to repair coral across the planet, various techniques have been introduced with most being logistically challenging, too costly, or ineffective. Helping Mother Nature rehabilitate coral is as tricky as a solving a Rubik’s Cube, but just like the Rubik’s Cube anything is possible. Coral rehabilitation can be perfected with practice and learning.

Mars Inc.'s  Mars Marine Symbioscience (MSS) Team in Indonesia, which is in the heart of the Coral Triangle, has done just this by creating a highly effective, geographically flexible, and environmentally adaptive reef rehabilitation system.

In addition to this, the MSS team is pioneering a new breeding format to sustainably provide ornamental fish to a thriving global aquarium market. This in turn creates a new form of income for the local Indonesian population with less strain on the local ecosystem.

I’ve witnessed the success of the coral reef rehabilitation project in Indonesia on two separate occasions thanks to my participation in the Mars Ambassador Program (MAP), a global initiative that allows Mars Associates to put our principles into action via mutually beneficial MAP assignments in the communities where Mars operates. Every Mars Associate has the ability to apply for a variety of global programs each year.

In 2013, the reef rehabilitation project included myself and other passionate Mars Associates via MAP. I have always been passionate about the ocean, but being given the opportunity to make a paradigm shift has changed my life forever. 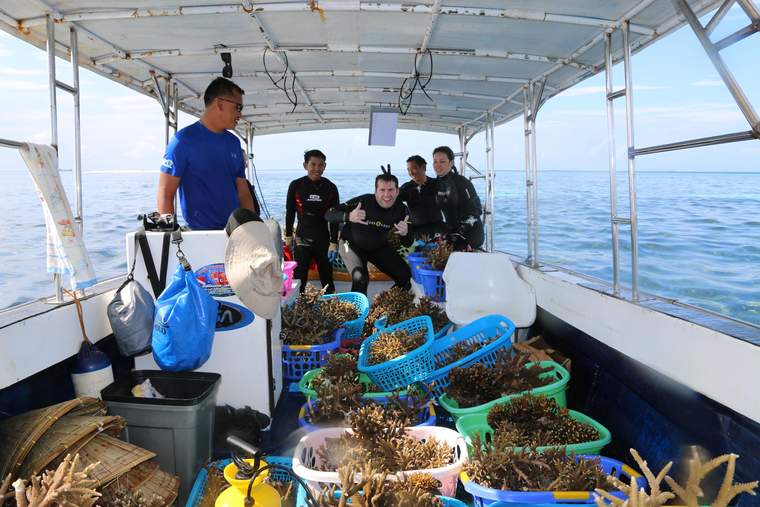 The 2013 MAP team was the first to participate in the reef rehabilitation project, but two more MAP teams have returned in 2014 and 2015, and each has made a greater impact on the program. In June, I returned as an experienced builder leading a team.

In our global economy not all societies have advanced fishing technology or oceanographic regulations, but the tremendous demand of increased population remains. In either case, our fish stocks haven’t adapted as fast as we have to supply the demand. No one sent a memo to the fish to increase their reproductive cycle.

In most fisheries, the fish left behind benefit from increased food stocks making them stronger and healthier, but what if the food stocks are wiped out along with the target fish? What if the byproduct of the catch was complete devastation of the ecosystem the fish originated from? In Indonesia, this is a common situation and in some cases considered a traditional means of supporting families.

There are two types of fishing practiced in Indonesia that are absolutely devastating:

1. Fish bombing (or blast fishing) is the use of dynamite or homemade bombs to stun or kill fish for easy collection. Fish bombing leaves its mark on the ecosystem in the form of explosion craters where there was once a healthy coral reef ecosystem. Continued fish bombing can leave the entire reef surrounding an island looking like moonscape, one of the most depressing situations I have witnessed as an avid SCUBA diver. Not only are the fish populations depleted, but the natural protection of the island is lost, causing a greater level of erosion and destruction during storms.

2. Cyanide fishing is the method of dispersing sodium cyanide into a coral reef for the collection of fish typically for use in aquariums. The result is that once-colorful coral reef that turns sheet-white signifying its death, another scenario I have witnessed.

Both bombing and cyanide fishing result in a “one and done” practice, meaning once an area has been fished using these techniques, it is virtually done forever, never to return to its normal state. Because Indonesia is made up of over 17,000 islands, it is easy to move on to the next location. Eventually, the next spot will dry up, leaving nothing in the Indonesian Archipelago.

These styles of fishing are unsustainable and highly illegal in most parts of the world. Despite this, they continue to happen daily.

In 2013 during a dive while I was repairing reef, I felt concussions from fish bombs destroying a nearby reef. The concussion wave felt like being pushed underwater by an invisible bully. Considering the concussion wave could be felt from well over a mile away, I cannot imagine the immense damage just one bomb could do. That day and the three separate concussion waves I felt still resonate with me.

Being aware of the damage that is being done, you can see the need to find a way to turn the tide in Indonesia. This is where the MSS team comes in to play. It has taken on the great task of fixing destroyed reef,  creating new ways of providing local income that are not only sustainable but lucrative for local families. This desire to create a positive change has spawned the beginning of the world’s largest reef rehabilitation project. 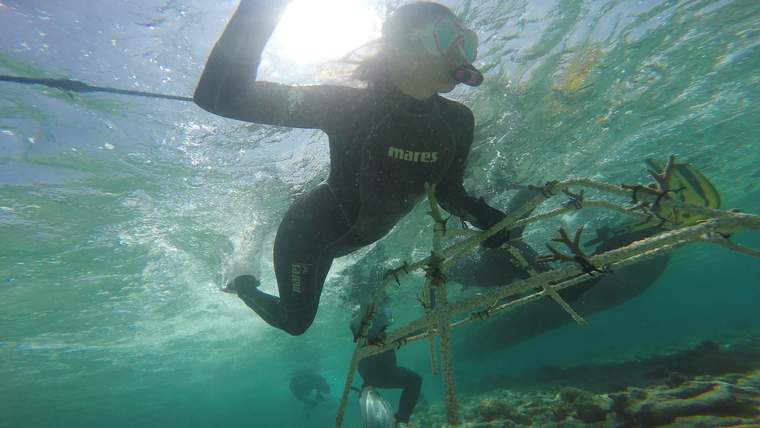 Since 2007, Mars Associates have been paving the way to a new and better way of living on the island of Badi just off the coast of Makassar, Indonesia.

The MSS reef rehabilitation process utilizes a foundation for the growth of new reef called “spiders.” Here's how it is done:

1. Spiders are formed from rebar coated with epoxy, then covered with a combination of sand and calcium carbonate.  Each spider is approximately a square meter, making it easy to negotiate on land and underwater.

2. In local areas of significant fish bombing, destroyed reef that would otherwise die is repurposed by using the remaining live coral fragments.

3. The coral fragments are replanted on the spiders in a variety of sizes ranging from finger length up.

4. Once a spider has been replanted with coral, it is delivered to the build site.

5. At the build site, experienced divers place the spiders on the ocean floor in an intricate web replacing destroyed reef while building around any existing structures. The unique shape and size of the spiders allows for flexibility while building.

6. The spiders are then tied together, creating a powerful foundation for new reef to flourish.

Returning to Badi, I was amazed at the coral growth over one year. Spiders from prior years are almost unrecognizable and completely covered in coral, proving success. 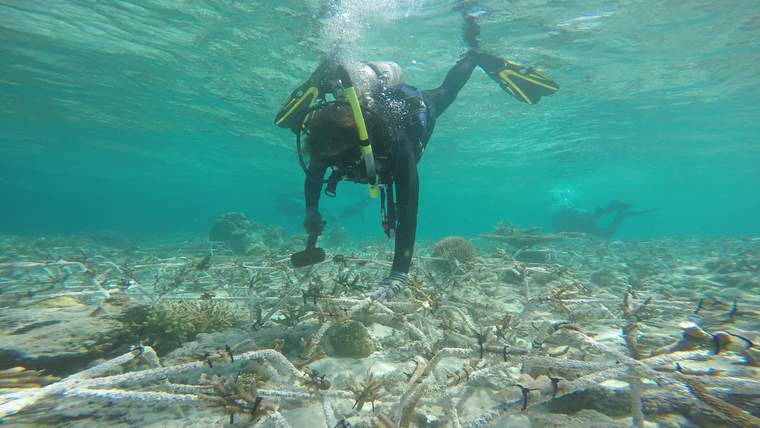 Since 2007, 8,645 spiders have been placed on the ocean floor. As a result, a plethora of new reef inhabitants have moved back to Badi, and the marine species get larger and larger. In 2013, there were only fish a few inches long, this year, we were visited by a dolphin inspecting the new reef, giving us approval on our work.

Even turtles are now common visitors to the island. The build area is protected against damaging fishing practices, and only Badi islanders granted fishing licenses will be allowed to take catch from the grounds.

This program has blazed a trail for future generations to successfully rebuild destroyed reef, improve fishing grounds, create profitable and sustainable platforms to supply ornamental fish, and educate local populations to think beyond tomorrow. I am proud to have been a small part.

'Green Reconstruction' Vital in the Aftermath of the Tsunami, Says WWF