"Liquid gold" is a popular descriptor for a refreshing mug of beer. But in the case of MillerCoors’ sprawling Irwindale, Calif., brewery, the phrase is most applicable to water — or the lack thereof.

Situated in the heart of the drought-stricken San Gabriel Valley in southern California, the brewery, which produces approximately 6 million barrels of beer every year, long has considered its water use.

“We’re 50 years in the valley, 35 years in this location, and we still remember the drought from two decades ago,” said Edward Gharavi, the MillerCoors technical services manager responsible for the facility’s energy and water programs.

Now, with the drought in its fourth year and showing no sign of let up, the brewery is tamping down even more.

Day-to-day, the company is also re-evaluating how water is used in various aspects of its operations.

Winnowing down water use

Driving through the front gate of the 227-acre property, visitors will see that 15 acres of lush green grass recently was pulled out and replaced with a cactus-laden dry landscape.

They’ll also see more than 10,000 solar panels installed last winter that are helping the brewery cut its energy use by as much as 38 percent during peak-demand hours. The solar arrays that cover 10 acres also save water because they eliminate local power plant demand for cooling tower water. 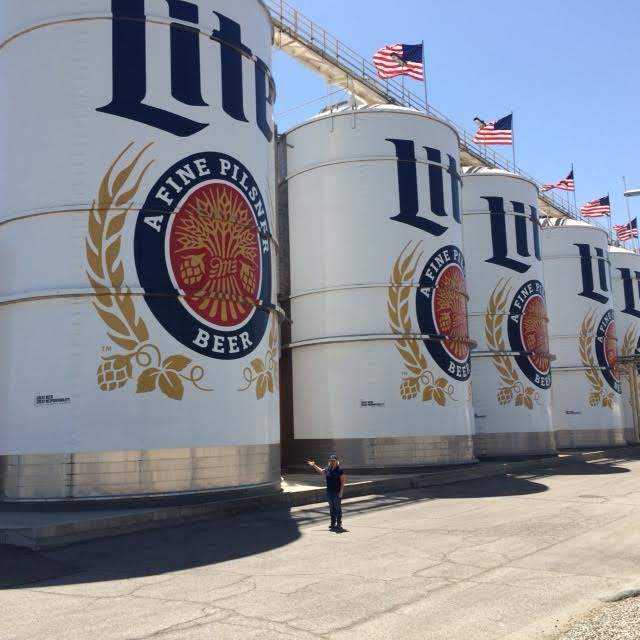 But the biggest water savings can be found inside the brewery, which makes more than two-dozen labels of beer.

Every step of the 21-day beer-making process — from cooking the hops to fermenting the beer in 60-foot-high towers to final bottling and packaging — is scrutinized closely.

“Once you see where the water is going, it’s easier to reduce,” communications specialist Anita Hernandez said during a tour of the sprawling complex dominated by fermenting tanks, aging tanks and rapid-fire assembly lines that handle 2,100 cans or 1,200 bottles of beer each minute.

Using new cleaning solutions in the facility’s massive brewing tanks — each with 98 filters — is saving hundreds of thousands of gallons of water each year alone, Hernandez said. Additional gains have been found by using plastic conveyor belts to move the beer bottles; the old metal conveyor belts had to be washed down constantly to prevent the cans or bottles from sticking.

By reducing its total water use by 26 percent in the last five years, the brewery has been able to maintain full production even as its local water supplier, the San Gabriel Valley Municipal Water District, has seen its reservoir levels and imported water deliveries from the State Water Project drop substantially.

Gharavi is well aware of the financial impacts of potential water cutbacks, which is one reason why the Irwindale Brewery is pushing hard to reduce water use to below three barrels of water for every barrel of beer produced by the end of the year.

“If we get to the point where we don’t have water supplies right here, we’d have to buy on the (more expensive) open water market,” Gharavi said. “We want to avoid additional costs while improving our environmental footprint.”