After witnessing a crop of failures that struggled with money and scale, the indoor farming business is picking up momentum in a bid to better compete against traditional farms in freshness and yields while avoiding forces of nature, from pests to drought.

Recent announcements by several indoor farming startups reflect this ambition. California-based Crop One just announced a $40 million joint venture with Emirates Flight Catering to build one of the largest vertical farms in the world. The new farm, set to be completed in December 2019, would rise up in Dubai and harvest 6,000 pounds of leafy greens per day.

The project is a major coup for Crop One, which is running one farm near Boston and selling its harvest to markets and other retailers locally through its brand FreshBox Farms. The joint venture also gives the venture-funded company a chance to show it can scale up and serve customers beyond markets and restaurants, the two common outlets for indoor farms.

We want to feed the world and do better.

"The food service industry is attractive because they have very high, fixed volumes, but they demand lower prices. You need a cost structure that can serve that market profitably," said Sonia Lo, CEO of Crop One, which also plans to build a farm in Connecticut and another in Texas this year. "There are plenty of vertical farms that are venture-financed where profitability is not a goal. They want market size and proof of science."

Lo's competitors are scaling up, too. Oasis Biotech, backed with a $30 million investment to date from Sananbio, a joint venture between Chinese LED maker Sanan Group and the Institute of Botany at the Chinese Academy of Sciences, held a grand opening of its farm in Las Vegas last week. Oasis plans to deliver later this month to its first customer, local produce distributor Get Fresh.

Oasis is building the production capacity of its vertical farm in two phases. The first, completed phase allows the company to produce 1,500 pounds of leafy greens per day, said Brock Leach, Oasis's chief operating officer. When the second phase is done, the farm will boost its daily yields to 6,000 pounds. 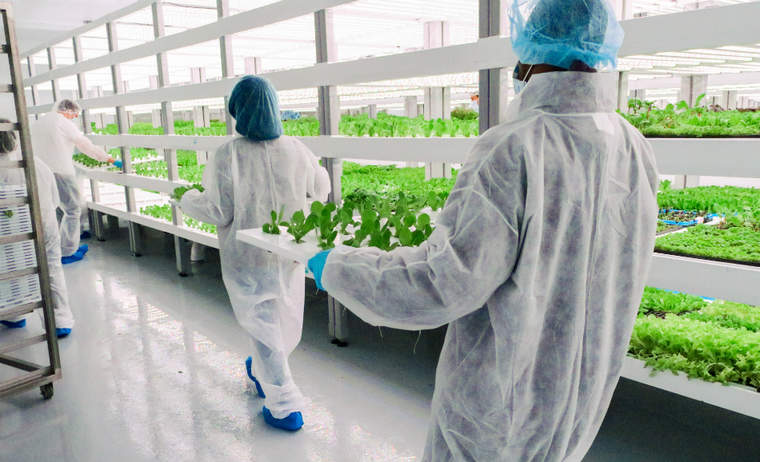 Oasis Biotech
Oasis Biotech recently launched its first consumer brand, Evercress, after moving into its Las Vegas farm in May.

"At Oasis, we want to feed the world and do better," Leach said. "With an increasing population and decreasing in agricultural production, we are heading to a dark place in the future unless we can change course and increase production."

Oasis doesn't only want to be a grower. Its business model includes selling equipment for vertical farming and designing and building indoor farms for others, Leach said.

Crop One and Oasis Biotech are part of a new batch of tech-savvy companies that emerged within the past decade to build indoor farms near big cities and deliver fresher and pesticide-free produce, typically highly perishable and high-value leafy greens, such as arugula and baby kale, to markets and restaurants. Lo noted that lettuce, which is otherwise grown mostly in Arizona and California, may have aged by two weeks between its harvest and appearance on your plate in New York City.

Indoor farm designs range from a farm-in-a-box that fits inside a restaurant or grocery store, such as the one marketed by such as Farmery, to larger operations pursued by the likes of Crop One and Oasis.

Growing produce indoors is nothing new, of course. A greenhouse is an old concept that brings crops into an enclosure but retains some key characteristics of field farming, such as the reliance on sunlight and soil, although some are using nutrient mixtures instead of soil to cut water use. This space is attracting newcomers, too. BrightFarms, a 7-year-old New York company, just raised $55 million from investors such as NGEN Partners to build more greenhouses across the country.

Vertical farms tend to have more electromechanical equipment and software to insulate them from the outside world.

A newer bundle of indoor farms starting to attract big-name investors is forgoing soil and sunlight altogether, relying instead on advanced lighting technology that lasts longer and is more tunable to different light spectrums for creating optimal conditions for different plants.

NASA claims to be the first organization to use LED light for growing vegetables indoors, back in the 1980s. Improvements in LED technology and price in the past decade prompted the growth spurt in indoor farming. The use of artificial lighting also allows growers to stack planters. Vertical farms tend to have more electromechanical equipment and software to insulate them from the outside world than greenhouses do, further reducing pests and diseases, said Neil Mattson, associate professor in the School of Integrative Plant Science at Cornell University.

Indoor farm executives like to highlight their efficient use of land and water to grow vegetables without soil, using 99 percent less water than the same acreage equivalent of field farms. But installing and running an LED light system — and for some farms, sensors and infrared cameras and automated equipment — means a high startup and operational costs when compared to conventional farming, Mattson said. Labor cost also can be significant. 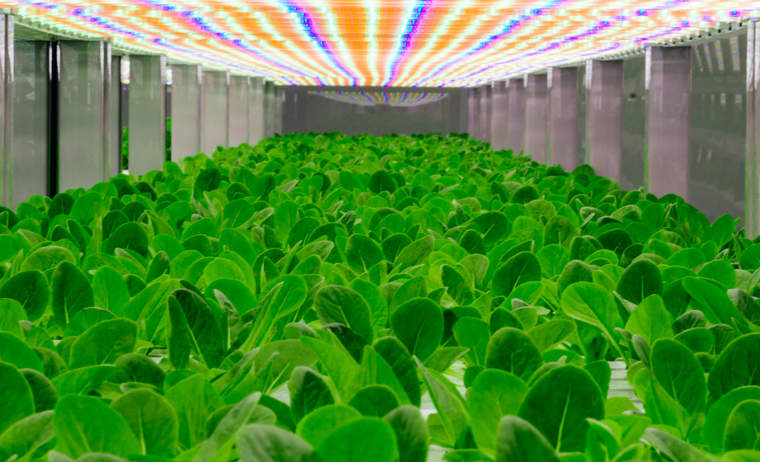 Some vertical farms, such as PodPonics and FarmedHere, have shuttered because they couldn’t drive down costs or raise money quickly enough.

"The vertical farming industry in its current version is only about six years old, and people are leveraging experiences from other industries," said Lo, a longtime tech investor and executive before coming to Crop One, initially as an investor and now its chief executive. "A lot of founders getting into this industry not appreciating the capital intensity and the need to have a sophisticated financial and operational skills."

The four-year-old startup wants to plant its vertical farms near big cities around the world and is already making moves do that in Japan and China. Middle East is also another potential target. Its CEO, Matt Barnard, told Reuters earlier this year that each farm will run from three to 10 acres.

Other venture-funded startups include Bowery, whose investors include Google Ventures, and AeroFarms.

Lettuce, which is otherwise grown mostly in Arizona and California, may have aged by two weeks between its harvest and appearance on your plate in New York City.

Water scarcity and the shortage of arable land certainly makes the Middle East a hotspot for indoor farming. The promise of a secured food supply and pesticide-free leafy greens is what prompted Emirates Flight Catering to invest its first vertical farm, the joint venture with Crop One, said Saeed Mohammed, the company CEO, via email.

The catering company, majority owned by the Emirates airline, also serves 105 other airlines that fly out of the Dubai International Airport. The new farm will allow the food service company to bring leafy greens from farm to fork within 24 hours, Mohammed said. It also enables the company to claim a lighter carbon footprint with its supply chain, he added.

The $40 million joint venture, split 60 percent-to-40-percent between Emirates and Crop One, won't be the last vertical farm for the catering firm.

"There are plans to extend our facilities across the UAE and into other geographies," Mohammed said. "There are already a number of ongoing discussions, but it is too early to confirm anything further at this point."

Is vertical farming the future for agriculture or a distraction from other climate problems?