Solar panels may harness the sun’s energy in the same way that plants do, but while some rural residents view them as another revenue-enhancing crop, others see them more as weed-like nuisances that threaten their pastoral way of life.

Solar projects certainly are growing rapidly throughout the United States, with total installed capacity just shy of 70 gigawatts and a contracted pipeline of 27.9 GW, according to SEIA. A recent Wall Street Journal analysis of EIA data reported that solar projects occupied 258,000 acres in 2018, while NREL estimates that solar will occupy 3 million acres by 2030.

That may be a small fraction of the nearly 900 million acres of farmland in the United States (PDF), but it’s enough to make agricultural communities apprehensive about the advance of solar onto previously pastoral land. While landowning farmers are grateful for the steady income that comes from leasing to solar projects, others in rural areas — including many state agricultural departments — are still grappling with what the growth of solar will mean for their concept of rural land and role as agricultural boosters.

If we can really connect with farmers and show them that solar development has an agricultural component as well, we can get a much greater understanding and acceptance of these projects.

Across rural America, states and counties have taken various tacks when it comes to regulating solar project siting. Connecticut and Oregon, as well as counties in North Carolina and Washington, have restricted solar development on prime agricultural land, citing concerns over the loss of farmland and impacts on food production. Yet solar development does not have to engender a food-vs-fuel trade-off. Some large-scale developers have made it a policy to only use degraded or marginal farmland for their projects, which can be restored by the prolonged fallow period of the solar project.

The agricultural industry is defined by cycles of volatility, risk and uncertainty. This year, spring flooding combined with the impact of Chinese tariffs on U.S. farm goods squeezed already tight margins for many U.S. farmers. In 2018, less than half of U.S. growers made any revenue from their farms, and this year, futures markets for staple crops are trading at the lowest prices since 2010.

A growing number of farmers are turning to solar installations or leasing their land to developers to compensate for this financial uncertainty. Responsibly sited, low-impact solar development offers an array of additional benefits that significantly can sweeten the pot for rural communities. In North Carolina, a farmer typically will rent out an acre of cropland for $27–$102 per year. 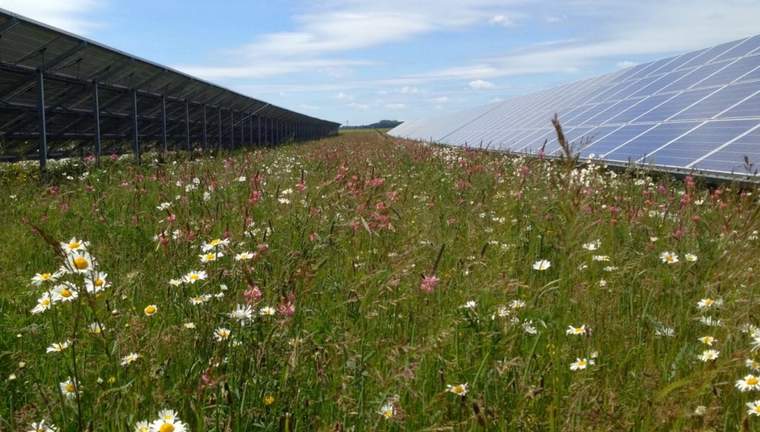 Meanwhile, in the same region, solar developers are offering farmers between $300 to $700 per acre to lease their land for solar development. What’s more, solar projects can bring long-term revenue streams to both landowners and the community at large, through the tax revenues or "payment in lieu of taxes" (PILOT) payments that developers negotiate with towns.

In addition to the financial cushion that solar can provide farmers, solar development increasingly is tapping into dual land uses that can add value to the rural environment — from solar plus grazing to "agrivoltaics" (solar + crops) to pollinator-friendly solar. It is estimated that up to $577 billion of annual global food production is directly dependent on pollination.

Pollinator-friendly solar projects — which incorporate perennial grasses and wildflowers throughout a project site to provide habitat for pollinators — can build soil health, improve local water quality and boost agricultural yields of nearby pollinator-dependent crops thanks to the increased abundance of native pollinators. Solar paired with active agricultural land uses, while more prevalent in Europe, is increasingly cropping up in the United States, from Massachusetts cranberry bogs to an agrivoltaics learning lab at the University of Arizona.

Some large-scale developers have made it a policy to only use degraded or marginal farmland for their projects, which can be restored by the prolonged fallow period of the solar project.

The benefits of solar co-location projects extend beyond the land to surrounding communities as well. Agrivoltaic systems in hot, arid regions could improve the physical and social well-being of farm laborers, according to University of Arizona study that found skin temperature can be up to 18 degrees Fahrenheit cooler when working in areas shaded by solar panels compared to exposed land. Neighbors who initially opposed a large-scale solar project in their community have been assuaged by the proliferation of wildflowers planted throughout a Minnesota pollinator-friendly solar project site, according to a developer.

Additionally, NREL has estimated that the co-location of solar arrays with farms or grazing can reduce installation costs by 3 percent to 8 percent per watt, driven by savings in site preparation and O&M. Though preliminary, Engie has conducted further research at their pollinator-friendly solar sites suggesting that the cooler microclimate around the panels results in higher panel efficiency, and thus increased production. 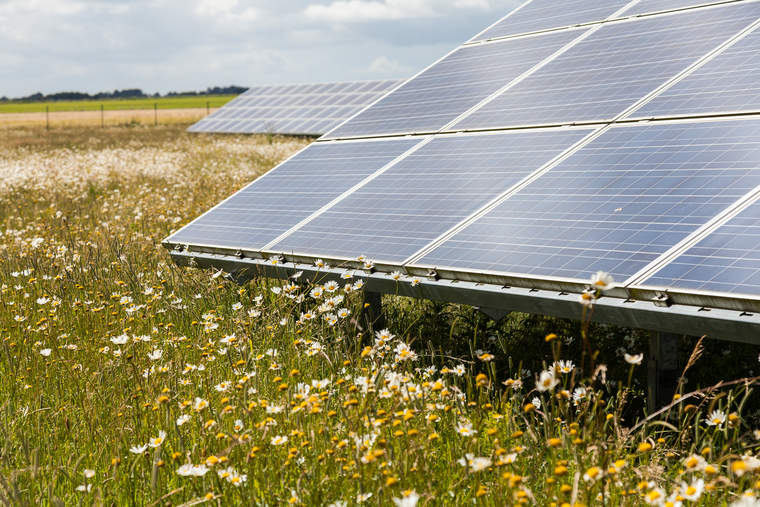 Given the potential for solar development to coexist with and complement rural land uses, it is fitting that rural electric cooperatives are some of the lead innovators in pioneering projects: Connexus Energy in Minnesota was one of the first utilities in the United States to develop a pollinator-friendly solar garden, and Indiana-based Hoosier Energy has piloted a solar plus sheep grazing community solar project that is benefitting both co-op and farmer.

Hoosier built its first solar project 5 years ago, and it didn’t take long to start looking into dual land use opportunities, as the co-op took note of community concerns and potential synergies offered by its strong connection to members. When it decided to pilot sheep grazing on a 1-megawatt community solar project, it partnered with a co-op member to graze sheep on the site. The 1 MW array powers 120 homes annually while a herd of 30 sheep keep the grass well-groomed.

For Hoosier, that means reducing its mowings — the largest recurring line item of the project’s operations & maintenance (O&M) budget — to just once a year. This is expected to save a few thousand dollars on O&M, enabling it to reduce the cost of the project’s solar generation by 2 percent to 7 percent, according to Josh Cisney, a renewable energy project developer at Hoosier. For his part, the farmer has a free place to graze his sheep.

"One of our co-op principles is concern for community and environment, so what we’re doing fits in with that," Cisney said. "If we can really connect with farmers and show them that solar development has an agricultural component as well, we can get a much greater understanding and acceptance of these projects."

It’s not always rainbows and butterflies

While the financial volatility faced by farmers is starting to incentivize diversification into secure income streams such as solar, the uncertainty cuts both ways: When seasonal and financial conditions align, farming presents a highly lucrative opportunity. This rollercoaster ride complicates the decision to sign a 20-year PPA.

The future for renewable energy has to include a sustainable land use component.

More fundamentally, in many cases, farmers have a deep-seated attachment to their land, and a desire to retain some decision-making authority if they do lease their land to a solar developer. Negotiating the land use agreements for rural solar projects remains a complicated and time-consuming endeavor, which co-location projects — despite their win-win potential — will not fully alleviate.

From a developer’s perspective, solar origination is already fraught with significant uncertainty and financial risk; introducing a whole new set of variables and stakeholders might be more than they’re willing to take on for a project. Furthermore, if incorporating dual land uses such as pollinator habitat or agrivoltaics engenders a higher upfront cost, that could be a deal-breaker to a developer. Education, technical assistance and incentives may be required to streamline project development and help co-located solar projects take root.

A new paradigm for a rural energy transition

The co-location of solar and agriculture may not provide a silver bullet to challenges facing both industries, including the alarming pollinator population decline, the economic and environmental sustainability of farming and the time-intensive project development process for solar developers. However, this "companion planting" approach to solar development offers the opportunity for a new paradigm of cross-industry collaboration that mutually reinforces both industries.

And with wind and solar cropping up in more rural communities, the bar is being set higher. "The future for renewable energy has to include a sustainable land use component," Hoosier Energy’s Cisney said. In leveraging new partnerships and co-location opportunities among developers, farmers and local communities, rural America has the potential to assume a more active leadership role in cooperatively advancing the clean energy transition.

Cultivating the coexistence of agriculture and solar farms