Con-way Inc. in a Nutshell Business: Freight transportation and logistics. 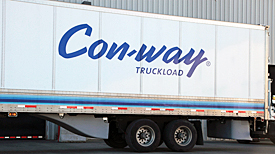 Con-way Freight Slows Down Trucks to Save Fuel

How to maximize fleet efficiency – and get a quick ROI

The Greening of Transport, One Mile at a Time