US Army Collaborating with Utilities to Reduce Energy Costs

US Army Collaborating with Utilities to Reduce Energy Costs

Lean, mean, and green, the U.S. Army is increasingly known for its efforts to seek out renewable sources of energy, take the lead in clean energy, and design greener tanks.

Now the Army has asked the RAND Corporation to find even more ways to reduce energy costs in installations by working hand-in-hand with utilities.

The Army, which spent $1.2 billion on energy costs in 2010, is under legislative mandate to reduce their energy consumption 30 percent by 2015. To that end, one effort is the New Zero Energy Installations (NZEI), calling for installations to produce as much energy as they use in a year.

But even the U.S. Army is limited in investment options as funding for energy efficiency or renewable energy projects can be inconsistent. So the military is committed to working with utilities to reduce energy consumption, save money, and find creative sources of funding for energy projects. For utilities, working in conjunction with army installations can help increase profits, improve the company's image, and meet their own energy conservation goals.

A new RAND Arroyo Center report, "Making the Connection: Beneficial Collaboration Between Army Installations and Energy Utility Companies," provides a basis for military personnel and utilities to address some challenges and create a win-win scenario for all involved.

One clear barrier mentioned in the report involved utilities not wanting to enter into Utility Energy Service Contracts (UESCs). These help finance and implement installation energy projects (such as infrastructure upgrades), but require up-front investment by utilities with payback typically averaging 10 years. The report suggests utilities are not familiar with UESCs and have a perceived risk in working with military installations due to potential bureaucratic, red-tape headaches.

In the report, RAND recommendations include training installation staff, having personnel attend workshops, and ensuring new UESC policies are clearly explained to contracting officers. The Army should then reach out to the utility companies to educate them on the installation policies.

A consistent theme in the report was inadequate staffing stifled effective collaboration between the two parties. Some staff members at army installations simply don't have the experience and expertise to fulfill energy project initiatives (i.e. not understanding power purchasing agreements or complementary methods to UESCs).

Without awareness of funding mechanisms, a lack of professional expertise, or the reluctance of staff to move forward, renewable energy projects can languish for months or years or can be abandoned all together.

Still, a couple noteworthy examples of successful army projects were included in the report:

The free RAND report can be downloaded here.

In keeping with U.S. Army goals to lead in green energy, an announcement this week revealed the military's interest in vehicle-to-grid (V2G) technology as a way to manage energy supply for its Aloha Micro Grid program at Wheeler Army Airfield on the island of Oahu.

REV Technologies Inc. announced it had been awarded a contract by SAIC to provide EV conversion technology and integrated V2G networking solutions for the U.S. Army's Tank and Automobile Research, Development and Engineering Center (TARDEC). 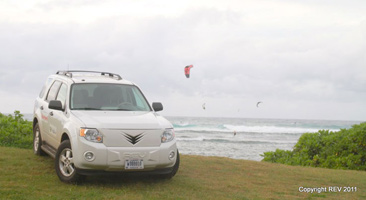 As REV explains, "The AutoGrid Network is a core component of the forthcoming energy Internet that accesses the untapped energy in electric cars with the electricity grid to support renewable power generation. The ability to control energy into and out of electric vehicles will be used to help reduce facility energy costs, generate new revenue and increase resilience and reliability of the national power grid with ancillary services, and provide backup power during grid outages."

Microgrids are attractive to the military as a secure power supply to maintain security operations both for fixed base and mobile installations.

What the Army can teach smart city planners