For energy visionary Amory Lovins, the antidote for America’s century-long addiction to fossil fuels is convergence on the grandest of scales.

His recipe: We must cease engaging the nation’s energy challenges one by one, as we have long tried. Rather, companies, planners and experts must devise hybrid solutions that solve parallel problems facing the U.S.’s most energy-intensive sectors -- buildings, electricity, industry and transportation.

Speaking with Joel Makower on stage yesterday at GreenBiz’s VERGE conference in Washington D.C., Lovins reviewed some of the ways this can be done, as laid out in his latest book, “Reinventing Fire: Bold Business Solutions for the New Energy Era.” The culmination of four decades of work by Lovins and the Rocky Mountain Institute -- the think tank he founded and chairs -- Reinventing Fire maps out an radically ambitious vision to expand the U.S. economy by roughly 2.5-times by mid-century, without using coal, oil or nuclear energy. 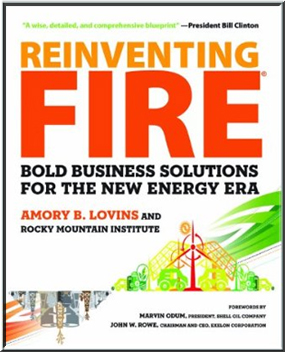 Cutting the fossil fuel use is only part of the benefit. By combining efficiency gains -- and reducing energy use -- Reinventing Fire foresees a much larger economy while saving some $5 trillion in net present value costs, compared with business as usual.

And this can all be done with no new technologies, no acts of Congress, with administrative decisions and led by business, for profit. Lovins explained: “None of these strategies required an Act of Congress. They could all be done administratively or at a state level.”

An example: The majority of states still reward utilities for selling more power, rather than cutting the bill. Reversing this is critical to enlisting utilities in the push to improve efficiency. Altering rules to encourage fair interconnection and open competition on the grid is controlled by FERC (Federal Energy Regulatory Commission), and needs no legislative overhauls.

Lovins has been thinking very big for a long time. Getting to these goals, he argues, is about scaling up our thinking -- a tough challenge for policy makers and technicians trained to think incrementally. “If a problem cannot be solved, enlarge it,” said Lovins, quoting a line attributed to Eisenhower. “Sometimes a problem can’t be solved not because it’s too big, but rather because the values were drawn so narrowly that it didn't encompass enough options, degrees of freedom and synergies to make it solvable.”

Another unique element of RMI’s strategy is how Lovins and his team approach the process of innovation. Rather than focus on technology and policy, Lovins said his team factors in design -- with deep understanding of process technologies, such as how carbon fiber can be used to radically cut vehicle weight, and business strategy. By getting competitive rewards right, he explained, there is scant need to regulate many of these transformations.

The triumvirate of buildings, cars and the grid offer an example of the synergies has RMI identified. Buildings consume three-fourths of our power, yet neither buildings nor the grid have meaningful ability to store energy. Vehicles meanwhile are electrifying, with the development of hybrid and battery-powered cars. By converging electrified vehicles with buildings and the grid, Lovins explained, the car’s battery pack can provide both transportation and back-up abilities: The grid can feed renewables to it and buildings can draw from it. “It’s much easier to solve the automotive and electricity problems together than separately,” Lovins said.

Indeed, remaking the grid from its original centralized design, Lovins explained, represents one of the greatest challenges ahead, but that comes with enormous rewards.

“Networked island-able microgrids” is a mouthful, but describes Lovins’ vision where energy is generated locally from solar, wind and other resources and used by hyper-efficient buildings. When each building, or neighborhood, is generating its own power, with links to other “islands” of power, the security of the entire network is vastly improves.

As our grid becomes increasingly vulnerable to faults from equipment failure, willful attack or even sunspot activity, the risk of a cataclysmic national scale grid failure is rising. In the face of hundreds of blackouts in 2005, Lovins said, Cuba reorganized its power transmission into networked island-able microgrids and cut the frequency of blackouts to zero within two years -- limiting damage even in the face of two hurricanes. (Check out this case study for more on Cuba’s efforts.)

Perhaps best of all, and given the location of this discussion in the nation’s politically polarized capital, Lovins’ approach is nonpartisan.

“It doesn't matter whether you care most about profits, jobs and growth, or about national security, or about health and environmental stewardship,” he said. The best solution for any of these individual problems is the same. So whether or not one believes in climate change, the imperative to boost economic growth justifies the same approach. By focusing on outcomes, rather than motives, Lovins said, disagreements should disappear.

For more on this work, check out Lovins’ recent Q&A with Joel Makower: Amory Lovins' Burning Quest to 'Reinvent Fire'

Photo from VERGE DC by Goodwin Ogbuehi for GreenBiz Group.

How Cuba's reopening could change its energy future

The long view: A conversation with RMI's CEO Jules Kortenhorst