This story first appeared at Yale 360.

Each year, one global industry gulps down trillions of liters of fresh water, together with massive amounts of chemicals. The wastewater from that industry is then dumped, often untreated, into rivers that bring its toxic content to the sea, where it spreads around the globe.

The industry in question? The textile-dyeing sector, whose colorful products belie the reality that it is an egregious polluter, especially in China, which by some estimates [PDF] produces — and then discharges — roughly 40 percent of all dyeing chemicals [PDF] worldwide.

Now, new waterless dyeing technologies are being developed and deployed that could help reduce the vast quantities of pollution generated by textile dyeing. In recent years, three companies have developed largely waterless dyeing technologies. Two are American enterprises — AirDye and ColorZen — and the third is a Dutch company, DyeCoo, whose process is being used by Adidas, one of its partners.

Although the three processes are very different from each other, the results are much the same. The use of water is cut to near-zero, sharply diminishing pollution. The quantity of chemicals is drastically reduced, while faster dyeing cycles lead to a major drop in energy consumption.

Still, despite these benefits, major questions remain as to whether these new technologies will be able to turn the tide in the struggle to reduce pollution in the textile industry. Water has been used to dye fabric for centuries, and textile firms generally have been reluctant to embrace change. New waterless dyeing machines also are expensive to install and the technologies often can only be used with certain kinds of cloth, such as polyester.

“As for ColorZen, this is actually a new application of a technology that has been around for over 20 years, and it has still not been accepted by the textile industry,” said professor Long Lin of the University of Leeds, a leading center of textile technology and color science.

China’s textile industry discharges about 2.5 trillion liters of wastewater into its rivers annually, according to a 2012 report (PDF) from the non-profit Institute of Public & Environmental Affairs. Among these wastes are many hazardous chemicals — tributyltin, pentabromodiphenyl ether, phthalates, perfluorooctane sulphonate and aniline — that are banned or strictly regulated in other countries because they are toxic, persistent, bio-accumulative, hormone disruptive and can cause cancer.

“The dyeing industry has made the cloth beautiful but [turned] the clean water black,” Sunyun Yao, a country deputy-secretary in Shaoxing County, China, said in 2010 at the start of operation Green Storm (Chinese), which fined or closed down companies illegally discharging untreated wastewater. More than 30 percent of China's dyeing houses are in Shaoxing. 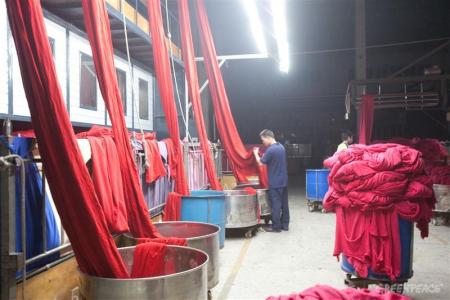 According to 2012 statistics from China’s Ministry of Supervision, water pollution accidents in all industrial sectors have risen to more than 1,700 annually — about five a day. But this is not the main concern, says Ma Jun, one of China's leading environmentalists and founder of the IPE, which created the China Water Pollution Map.

“These toxic spills are emergency situations, but the daily discharge of hazardous substances is by itself already an ongoing disaster,” Ma said. “Some suppliers of brands such as Ralph Lauren, Abercrombie & Fitch, Hugo Boss and Victoria's Secret are very bad polluters, but these brands do not want to face this issue of pollution in their supply chain. This is, in my view, totally irresponsible.”

The intensifying development of waterless dyeing processes has the potential to change things if the technologies are adopted on a large scale, textile experts say.

DyeCoo's machines use carbon dioxide, which is heated and heavily compressed so it becomes supercritical, a state between a gas and a liquid. It then acts as a solvent and a solute at the same time. As a result, color pigments penetrate much more quickly into textile fibers and no chemicals or salts are needed. Because the dyeing time is cut in half and fabric comes dry out of the machine, energy use is reduced by 50 percent, according to DyeCoo's former CEO Reinier Mommaal.

Crucially, there is no wastewater discharge. After each batch is dyed, only a handful of residue remains, consisting mainly of color pigments and oil.

About 95 percent of the carbon dioxide can be recycled and used again in the machines, said Mommaal. Using less energy and chemicals means that, in the end, the DyeCoo process brings production costs down by about 30 to 50 percent, the company stated. At the moment, the Yeh Group in Thailand is using DyeCoo's machines to produce clothes for Adidas, and Far Eastern New Century in Taiwan uses these machines to manufacture clothes for Nike.

AirDye has taken a different direction. Its cloth is no longer dipped in the traditional bath filled with water and dye, but put into printing machines. Pressure and heat are used to transfer specially formulated dyes from paper onto polyester fabric. “The molecule of the dye is attached to the molecule of the fiber, which gives a more lasting color,” according to Rita Kant, assistant professor at the Institute of Fashion Technology at Panjab University in India.

This process is faster than the traditional one, and uses 95 percent less water and 86 percent less energy, according to AirDye.

ColorZen has developed a method that changes the molecular composition of cotton fibers, making it more receptive to dye. After treatment, the dyeing process uses 90 percent less water, 95 percent fewer chemicals, 75 percent less energy and half as much dye as conventional processes, according to the company. 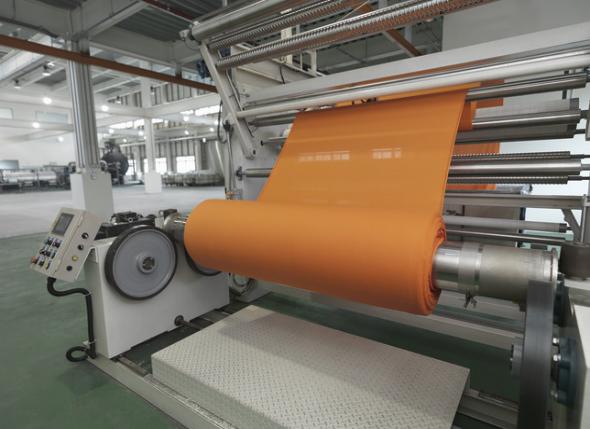 Ajoy Sarkar, an associate professor at the Fashion Institute of Technology and Vocational Development in New York City, said that pre-treatment of fabrics raises costs, as do logistical issues. “ColorZen has one location in China, which means that companies have to transport their fibers to this facility, have it treated, and then transported to a yarn plant to have it spun,” said Sarkar.

Experts such as Sarkar say another major hurdle to expansion is the cost of waterless dyeing machines. DyeCoo's machines cost $2.5 million to $4 million dollar apiece, for example. “The price per unit has to fall substantially,” said Sarkar. “Otherwise only companies with deep pockets like Nike or Adidas will be able to make such investments, but not the majority of industry. ... Nevertheless, I am excited. This is the first innovation in dyeing that uses absolutely no water and that is a big advance.”

As the price of clothing imported to the United States dropped 25 percent in the last two decades, Asian textile mills often slashed costs by simply discharging untreated wastewater into rivers.

This has resulted in severe land and water degradation around textile clusters, according to various reports from Greenpeace, the Chinese Institute of Public & Environmental Affairs (PDF), World Wildlife Fund and the Swiss Federal Institute of Aquatic Science and Technology.

The bigger picture is even bleaker. Apart from dye houses, the industrial belt along major Chinese rivers such as the Yangtze and the Pearl includes chemical plants, petroleum refineries, nuclear fuel processing plants, metal smelters and electric equipment producers. 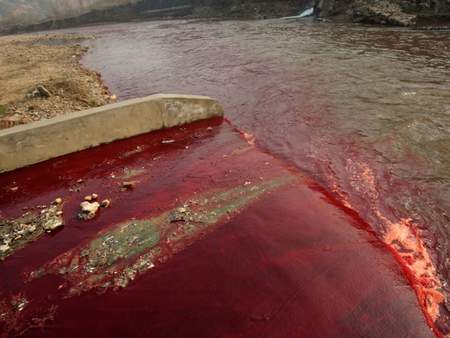 “It is breathtaking to see how bad it looks,” said Ake Bergman, an expert on hormone-disrupting chemicals (PDF) and a professor at Stockholm University and at Tongji University in Shanghai. Bergman and his colleagues are monitoring the discharges in the Yangtze River, which receives around 30 trillion liters of wastewater every year, much of it untreated.

Exposure risks to hazardous chemicals always will be highest in manufacturing areas, says Daniel Fagin, a science journalism professor at New York University. But Fagin — author of the Pulitzer Prize-winning book "Toms River," about a cancer cluster in a New Jersey town linked to the discharge of hazardous substances by a chemical plant — also says that “such exposure is not confined to a town that has a chemical plant. It is everywhere. We need to come up with intelligent ways of measuring that risk and responding to it.”

Chemicals from textile dyeing also are spread (PDF) in a very different way — by importing clothes with chemical residues on them. Friends of the Earth, World Wildlife Fund and Greenpeace have tested a large variety of clothes that proved to contain hazardous chemicals, such as aniline, phthalates and nonylphenol ethoxylates. All-weather jackets, wrinkle-free clothing and T-shirts with plasticized prints were found to be particularly infused with chemicals used in dyeing, finishing and waterproofing.

“The vast majority of these chemicals are washed out in a single wash and end up in our waterways,” said Kevin Brigden, a chemist working at Greenpeace Research Laboratories in the United Kingdom. “If you look at the total amount of clothing being sold per country, tens or hundreds of tons of chemicals that have been banned from being used in European clothing manufacturing are imported in this way.”

The Chinese government has announced a $320-billion plan to tackle water pollution. New standards for wastewater discharges from the textile dyeing industry have been set, including limits on the amount of fresh water used to produce each ton of fabric. Whether these laws will be enforced at the local level remains a major question.

Bangladesh, a large textile exporter, is grappling with its own problems related to water use in the dyeing process. Each year, the water table of Dhaka, the capital of Bangladesh, drops by one to two meters, in part because of water use in the textile industry. In neighboring India, the government has closed (PDF) hundreds of small textile-dyeing plants because they failed to meet court-ordered mandates to achieve zero liquid discharge.

Waterless dyeing companies say their technologies have resulted in a significant reduction in water use and pollution. Last year, for example, Adidas announced that by using 1 million yards of DryDye fabric, the company was able to save 25 million liters of water. Still, these savings are just a small fraction of the estimated annual 6 trillion liters of fresh water currently used by the global textile industry.

For waterless dyeing technology to be widely adopted, the price of the dyeing machines must come down substantially, according to the University of Leeds’ Long Lin.

“The industry will never accept such new technology unless it is cheap enough,” said Lin. “The dye industry is typically a very low-margin industry, which is unfortunate because now the only way to make money is to abuse the environment.”

Top image by Snaps880 via Wikimedia.

Just dye it: how this apparel company is developing water- and chemical-free textile tinting