A survey of global businesses released today at the BSR Conference finds that engagement in -- and more importantly, funding for -- sustainability and CSR programs is expected to hold steady or increase at most companies.

The survey, conducted by GlobeScan on behalf of BSR, shows that 84 percent of the respondents, which include nearly 400 respondents from the majority of 250 global BSR member companies are optimistic about the ongoing expansion of CSR efforts among the business world.

For their own companies, the majority expect to see at least some growth in their CSR operations: Just over 70 percent said their CSR communications, both internal and external, will grow next year. And 42 percent expect a bigger budget for CSR work this year, with another 52 percent predicting at least the same budget as last year.

"When the recession hit with full force two years ago, we urged our members to stick with sustainability as a key to achieving long-term business success," BSR President and CEO Aron Cramer said in a statement. "It's very encouraging to see that, even in a world still marked by instability and change, they're staying the course."

Addressing climate change remains a top priority among survey respondents, with 63 percent saying it was a high priority. Workers' rights and human rights were the next two priorities, and 62 and 59 percent, respectively.

Although companies put climate change high on their list of priorities, the survey results suggest that the need isn't as urgent as in 2009, when the poll was conducted just in advance of the Copenhagen climate summit. Last year, 41 percent rated climate change the highest level of priority, compared to 27 percent doing so this year.

Respondents to the survey are highly optimistic about whether or not global business will embrace CSR -- though again, not as optimistic as in 2009. In 2010's survey, 84 percent of respondents called themselves "optimistic" about the chances of companies making CSR core to their operations in the next five years; in 2009 that number was 90 percent.

One challenge to wider adoption of CSR practices is an ongoing lack of trust in business, the survey found. On a five-point scale from "a great deal of trust" to "no trust at all," 87 percent of respondents chose medium to low levels of trust from the public on behalf of the private sector. (See figure below for details.) 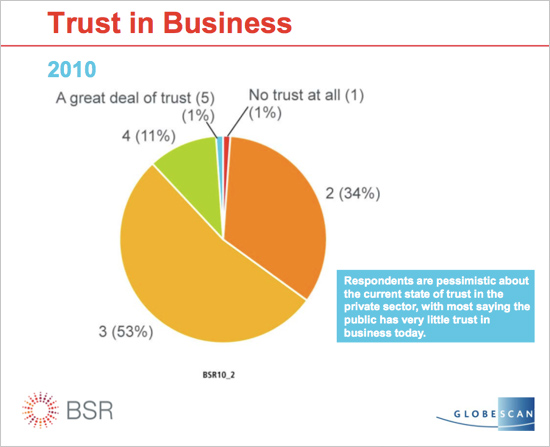 The survey identifies three actions businesses can take to overcome the trust gap:

The full results of the survey, "BSR/GlobeScan State of Sustainable Business Poll 2010" [PDF] is available for download from BSR.org.

What your business needs to do to overcome public distrust

Sustainability Leadership in the Face of Adversity