Justin's Nut Butter and the Search for Sustainable Palm Oil

Justin's Nut Butter and the Search for Sustainable Palm Oil

Justin's, a nut butter company from Colorado, is on track to have all of the palm oil in its nut butter squeeze packs and peanut butter cups certified by the Roundtable on Sustainable Palm Oil (RSPO), a goal shared by several major food producers.

But since its founding, Boulder-based Justin's has said its palm oil is sustainable due to a separate certification carried by its supplier. And just as major players like Walmart and The Hershey Company joined the RSPO this week, the Malaysian government announced it's creating its own palm oil certification program.

While Justin's experience illustrates how a small company founded on environmental ideals can source sustainable palm oil, it also serves to illustrate just how complicated the overall playing field for palm oil sourcing has become. The market for sustainable palm oil has recently been threatened by a murky cloud of competing certifications that could cause confusion and difficulties for companies trying to make better sourcing decisions.

"The challenge is, how do you find palm oil that comes from an ecologically sound company?" Justin's founder, Justin Gold, said about one of the questions he faced in creating his company. From the start, he wanted to make the best environmental choices he could, but also wanted to make a product that people would and could buy.

"How can you be organic and sustainable with your packaging and raw ingredient sources, but also sell a product that consumers can afford, and grow the business?" he said.

Gold said he could have avoided using palm oil altogether, but that would mean oils would separate out of nut butters -- palm oil stabilizes that separation -- and he didn't think that would be something most people would relate to.

Palm oil is used in numerous consumer products, including all sorts of foods and cosmetics, so there is a large potential market for certified sustainable palm oil. And because some major companies like Cargill, General Mills, Walmart and SC Johnson have set palm oil goals, there is a clear demand, and now a few different palm oil certification programs exits. 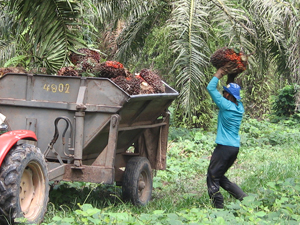 In searching for the greenest possible option, Gold eventually came across Agropalma, a Brazil palm oil producer that distributes in North America through ingredient company Ciranda.

The RSPO began auditing Agropalma's operations in the last week, but Justin's is a step ahead of RSPO certification because it only buys organic palm oil from Agropalma, which already carries EcoSocial certification, a program with environmental and social standards.

"Most of the RSPO sustainability approach has to do with conventional palm oil, and not organic," said Prescott Bergh, Ciranda's director of marketing.

"There is good supply [of organic, sustainable palm oil]. There is more available than is sold," Bergh said. "We certainly have capacity to grow." He said Ciranda's ability to supply sustainable palm oil would only be a problem if a larger company, like a Jif or Skippy, wanted to buy from them. "We'd love to have that problem," he said.

The organic certification tied to EcoSocial is what makes that certification stricter than RSPO, Bergh said. Both certifications cover soil fertility, erosion, energy use, water quality, waste, greenhouse gas emissions and other topics. "The whole efforts in sustainability are fairly similar," Bergh said.

But as with sustainable forestry, which has a few competing certifications, there are some specific differences. EcoSocial forbids the use of genetically modified organisms, while RSPO certification has nothing to say about GMOs. EcoSocial also leans a bit more on human and social criteria, with attention given to Fair Trade practices.

EcoSocial is admittedly working on a smaller scale -- it only applies to organic production -- and has more awareness in Europe, where Fair Trade carries more weight, Bergh said. The RSPO has had a much more global vision, by inviting companies from around the world to participate in its work.

The RSPO certification is also poised to become the commonly-recognized standard, at least in the U.S., for sustainable palm oil, as the above-mentioned companies start securing sources and put the RSPO logo on products.

However, the RSPO will be facing some competition from the very countries it was founded to improve.

"[T]he Roundtable on Sustainable Palm Oil keeps on changing its goal posts on how to produce sustainable palm oil," Commodities Minister Bernard Dompok of Malaysia was quoted as saying in announcing Malaysia's own certification system.

Indonesia, meanwhile, developed the Indonesian Sustainable Palm Oil program, which, unlike the voluntary RSPO, will be mandatory for palm oil producers in the country to participate in.

Over in Brazil, though, Agropalma has been a member of the RSPO since it was founded in 2004. Ciranda said the RSPO has been focused more on Indonesia and Malaysia, where there's been more concern about palm oil's effects on deforestation and animal habitats, than in Brazil.

"I've been requesting [RSPO certification]. I've been pushing," Gold said. Ariane van Niel of the RSPO's communications department said certification of growers started in 2008, and that Agropalma submitted itself for assessment earlier this year.

But as for things Gold can control, he said his position as a small business has allowed him to make quicker decisions and also do something larger companies won't: covering the premium for his ingredient choices. "We've been growing rapidly. Our costs have been increasing," Gold said. "We absorb those costs. We don't pass those on to our consumer."

The way Gold sees it, securing a source of 100 percent sustainable palm oil isn't hard, as long as you're willing to pay for it. "The palm oil was fairly easy to do because it was there and I just secured it," he said.

Come 2015, the endpoint for most major companies' palm oil goals, we'll see how easy it is for the bigger players as well.

[Editor's note: This article has been updated with a response from the RSPO.]