200 days from COP21, the momentum begins in Paris

200 days from COP21, the momentum begins in Paris

Here we are, 200 days before one of the most important political events in generations, the United Nations Climate Change COP21, which will gather more than 190 countries in Paris to agree on a global deal to limit carbon emissions.

Hundreds of business and finance leaders have convened during the first Climate Week Paris (#CWParis) in order to build momentum towards December. 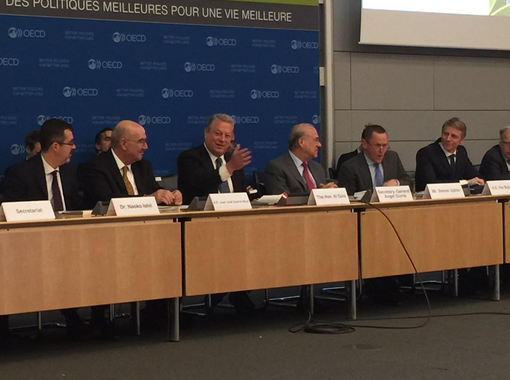 Michael Mathres
</p><p></p><p></p><p></p><p></p><p>Al Gore at the opening of OECD Summit during Climate Week Paris</p>
Discussions, under Chatham House Rule, were led by finance leaders from across the investment spectrum. Ministers from Sweden and Mexico talked with CEOs from pension funds and investment banks such as Goldman Sachs and NGOs such as Carbon Tracker Initiative to try to promote dialogue and enhance understanding between countries and institutions interested in mobilizing private investment financing for low carbon and climate-resilient infrastructure.

The mood at the forum was cautiously pragmatic, with topics ranging from defining the nascent yet growing green bond sector to understanding the current state of capital markets and the appetite for such green infrastructure finance from institutional investors.

Today, American philanthropist and billionaire hedge fund manager Tom Steyer of NextGen Climate will take stage, and it will be the start of the cornerstone event of the week: the Business Climate Summit (#BClimateSummit). It aims to provide a unique forum for business and government leaders to demonstrate bold action, adopt forward-looking strategies and call for ambitious policies that will allow the world to scale up solutions.

There seems to be genuine interest to change the proverbial business-as-usual, as several companies such as Unilever and Infosys have announced new commitments towards using 100 renewable energy in their operations. More commitments are expected to be announced in the next few days.

What is even more interesting and unconventional is that several industry associations and networks such as the World Business Council for Sustainable Development, U.N. Global Compact, International Chamber of Commerce, the Climate Group and We Mean Business Coalition have decided to work together, showing the importance of this event and the need for greater collaborations amongst and across sectors.

The French government also seems keen to emphasize the role of the private sector at this year’s COP21, as French president François Hollande will open the seminal event.

However, according to a BusinessGreen investigative article, there already seems to be a bit of controversy from one of the summit’s sponsors, the European Chemical Industry Council (CEFIC), accused of watering down the summit’s outcome document by taking out any references to science and carbon pricing.

Despite this, the mood in Paris seems positive and optimistic. As Mark Kenber, CEO of the Climate Group, said: “What’s changed so dramatically is the role of non-state actors such as business, cities and regions. It is they who are leading, with governments to follow.”

It will be interesting to see if business will show true leadership, and see how ambitious their commitments and support for a global deal on climate will be.

Adrian Grenier at the COP21 talks