It is, by any measure, historic: 195 countries agreeing, for the first time, to a plan to combat climate change. And while the Paris Agreement, as it’s come to be called, will be dissected and discussed every way imaginable over the coming days, weeks and months, it represents a key shift in the climate movement: a global consensus that something significant needs to be done, and a pathway to do it.

Most analyses undoubtedly will fall into three buckets, a classic bell curve of assessment: a relatively small percentage at either end will advocate that the accord is, variously, an overwhelming success or a dismal failure. Each side will come armed with forceful opinions and compelling statistics — that what was created in Paris puts the world on a solid trajectory toward addressing climate change, or that the substance of the agreement is too little, too late.

Some climate activists and scientists have decried the agreement as everything from a fraud to somewhere between 'dangerous and deadly.'

In the first 24 hours since France's Foreign Minister Laurent Fabius made the agreement official, there was plenty of both. Leading organizations — Sierra Club, World Resources Institute, Environmental Defense Fund, Ceres, We Mean Business, WWF, The Climate Group and countless others — issued statements declaring some version of victory. So did scores of heads of state.

At the same time, some climate activists and scientists have decried the agreement as everything from a fraud to somewhere between “dangerous and deadly,” in the words of one NGO critic. As noted climate scientist James Hansen described the Paris Agreement: “There is no action, just promises.”

In the big, fat middle of the bell curve are the rest of us — including nearly every company that has been paying attention — who long had anticipated that whatever came out of Paris would be necessary but insufficient, an exercise that would set some much-needed guideposts for action but likely would be inadequate to address the problem at the scale, speed and scope demanded to fend off severe climate-related impacts. These are the companies that, by and large, are looking to get by, reducing their climate impacts without breaking the bank.

It’s too late for some of that: Some of those severe impacts are upon us and will worsen, even if the Paris Agreement is ultimately fulfilled in both letter and spirit.

So, how did business fare in all this? Not bad, considering.

Some in the private sector or their institutional proxies declared victory even before any of us arrived in the French capital, citing the robust number of company and industry commitments made to ramp up renewable energy use and reduce greenhouse gas emissions.

For the first time in climate-negotiation history, the largest organizations representing big business were aligned, collaborating and focused on meaningful change. Many of the world’s largest financial institutions had committed to ambitious investment and lending targets, as we’ve reported here, here and here, for example. More than $3 trillion in funds were on their way to being divested from fossil fuels. Renewable-energy technologies were maturing and becoming globally competitive. Companies were combing their supply chains for opportunities to wring out greenhouse gas emissions from everything from agriculture to apparel to automobiles. Everyone from entrepreneurs to governments to civil-society organizations were chipping in, if not collaborating.

(GreenBiz managing editor Elsa Wenzel put together a terrific summary of many corporate and institutional commitments.)

Some in the private sector or their institutional proxies declared victory even before any of us arrived in the French capital.

So, the argument went, whatever happened in Paris wouldn’t change that much. The business world was already on a glide path to a low-carbon economy.

It was a nice sound bite — especially in the event that no multilateral agreement emerged from COP21 — and it is substantively true. But it lacked the authority of a global consensus, even one that, like the Paris Agreement, isn’t legally binding.

All of those ingredients were indisputable keys to the ulitmate success in Paris. You could see it coming in the days leading up to Saturday’s grand finale. The conversation at more than a dozen conferences, receptions, dinners and small-group events I attended last week were rife with references to "market signals," "stranded assets," "low-carbon technologies," "decarbonization," "reforestation" and other words and terms that represent, directly or indirectly, unprecedented business engagement and the recognition of the hard work — and the opportunities — ahead.

There was little doubt that the global business community was ready, willing and able to move forward with an ambitious agenda. I heard practically no references to "job-killing regulations," "extreme leftists wealth transfers" or "climate alarmists," the currency of a small handful of practiced communicators seeking to sow confusion and undermine the need to take action. From what I could tell, if they were in Paris (and they were), they were talking largely to themselves. They utterly failed to do undermine anything.

I heard practically no references to 'job-killing regulations,' 'wealth transfers' or 'climate alarmists,' the currency of a small handful of practiced communicators seeking to sow confusion and doubt about the need to take climate action.

The corporate leadership crowd was well represented. There were the usual visionary business voices — Paul Polman, Richard Branson, Elon Musk and Ted Turner were ubiquitous, as they always are at these events — but also some newbies.

For example, at the World Business Council on Sustainable Development Member Council, where I moderated several mainstage panels, I had the opportunity to interview John A. Bryant, chairman and CEO of Kellogg Company, a global food giant that hadn’t been heard from much on climate change until recently. So, too, Eric Olsen, CEO of LafargeHolcim, the global cement giant. They were among the hundreds of corporate chieftains who descended on Paris to make their voices heard. 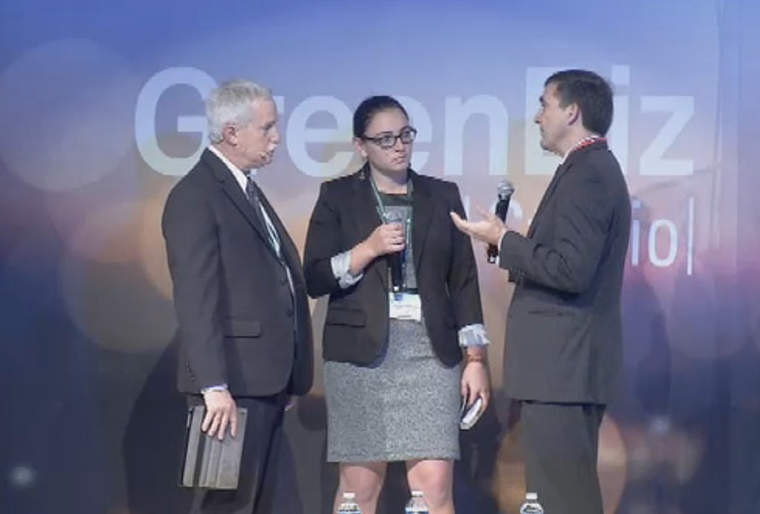 <p>GreenBiz's Joel Makower and Lauren Hepler interview Kellogg Company Chairman and CEO&nbsp;John A. Bryant, at the WBCSD Member Council event at COP21.</p>
None of these business leaders were advocating to slow things down. Indeed, they were focused on how to decarbonize their supply chains, improve lives in developing countries in a way that created new markets without increasing greenhouse gas emissions, and ramping up new, low-carbon technologies and techniques. Some were calling for carbon taxes. Most saw new business opportunities emerging from the market signals that a strong Paris Agreement could send.

The mainstream media seems stunningly blind about all of this. Here, in its entirety, is how the New York Times summarized over the weekend what the climate deal means for business:

The ambitious targets included in Saturday’s deal for limiting the rise in global temperatures may help companies involved in renewable energy and energy efficiency by expanding their markets. Setting a high bar may also make the energy industry attractive for innovators and venture capitalists, increasing the chances of sweeping shifts in what has been a conservative business. The agreement may make life difficult for some of the incumbent companies like electric utilities and coal producers, whose product emits high levels of carbon dioxide.

All of this is no doubt true, but it’s naïve, to say the least. It's not just energy, stupid. The Times' summary omits many of the biggest transformational business opportunities already in progress: the move to vehicle electrification, car sharing and autonomous transportation; the ability of the Internet of Things to engender radical efficiencies in the use of energy, water and other resources in buildings, transportation systems, logistics, cities and more; advanced agricultural techniques that minimize inputs and sequester carbon, now being implemented by some of the world’s biggest food and ag companies; the emerging circular economy, with its capability to dramatically reduce material throughput while re-localizing commerce; the advanced materials revolution, and much more.

All of these technologies and trends are destined to accelerate post-Paris.

This is the promise of COP21. And it was part of hundreds of conversations, involving the world’s biggest companies as well as many of the most promising startups and disruptive technology companies.

To be sure, there was a nagging feeling that all of this positive and promising talk represented a giant, global bubble — albeit a 40,000-person bubble — an echo chamber of the good guys preening their sustainability cred, and maybe a few others coming along for the ride. One could easily have left Paris with a sense that the private sector is all in. Clearly that’s not the case.

And there were glacier-sized holes in the final agreement. The impacts of shipping and aviation, for example, were omitted. Shipping alone represents roughly the carbon emissions of Germany, according to the Carbon War Room, and  are on a course to increase by as much as 250 percent by mid-century.

There were serious concerns about the exclusion of the rights of indigenous peoples, the lack of finance for loss and damage caused by climate-related calamities, and the fact that the emissions-reduction commitments made by countries still add up to well over 3 degrees of planetary warming, more than twice the 1.5 degree aspiration stated in the final agreement.

There were glacier-sized holes in the final agreement. The impacts of shipping and aviation, for example, were omitted.

Clearly, there’s much more work to be done.

For the private sector, there’s a need to look beyond their value chains to the larger systems in which they’re operating. To achieve the ambitious goals companies and countries have set for themselves — to live up to the promise of warding off climate change’s worst impacts — will require rethinking systems. That includes the consumption model that has become the expectation of any self-respecting developing economy.

It also means rethinking the purpose of business: to make money or serve society?

Many companies present in Paris would no doubt rush to say that both are possible. But there’s a lot of change yet to happen, and little time to do it, to prove that all these business leaders truly intend to be the change they wish to see in the world.