Battered by the recession and falling oil prices, the biofuel industry in the U.S. looks to be on the ropes, reports the Wall Street Journal:

“The global credit crisis, a glut of capacity, lower oil prices and delayed government rules changes on fuel mixes are threatening the viability of two of the three main biofuel sectors -- biodiesel and next-generation fuels derived from feedstocks other than food. Ethanol, the largest biofuel sector, is also in financial trouble, although longstanding government support will likely protect it.”

The water footprint formula devised by Dutch hyrdro engineer Arjen Hoekstra was the source of much discussion at the recent World Water Week conference in Stockholm, according to Spiegel Online. Hoekstra’s calculations of how much water it takes to produce everyday goods have made headlines (i.e. 10,000 liters for a pair of jeans, 2,400 liters for a hamburger, 140 liters for a cup of coffee).

At the conference, the talk focused on water waste and how to stop squandering the resource."Because of the international trade in water-intensive products, there are floods of virtual water flowing around the world," Spiegel quoted Hoekstra as saying. "And many of them are flowing in the wrong direction, going from water-poor regions to the water-rich."

GreenBiz.com’s recent coverage of “water as the new carbon” includes a Q&A and podcast with Chuck Gordon, the CEO of Siemens Water Technologies, Gap’s efforts to use water responsibly and highlights of World Water Week reports.

Swiss firm SIGG, the maker reusable beverage containers, reports that until last summer the lining of its metal bottles contained a trace amount of bisphenol A. In an open letter, SIGG CEO Steve Wasik says the liners previously used in the company’s wares did not leach BPA or any other substance, but mounting concern about BPA prompted his company to create BPA-free liners. The new EcoCare liners have been used in the company’s products since August 2008, he said.

So why wait a year to tell the public? Here’s what Wasik says: “The primary reason that I am writing this letter today is because I believe that the BPA conversation has changed dramatically in the last 12 months. Last year, the primary concern was that of BPA leaching from bottles. Since that time the dialogue has evolved such that now some people are concerned about the mere presence of BPA and some states are considering legislation.”

Laboratory tests on animals have linked exposure to BPA to developmental and reproductive issues. SIGG’s website has photos comparing the new and old liners: 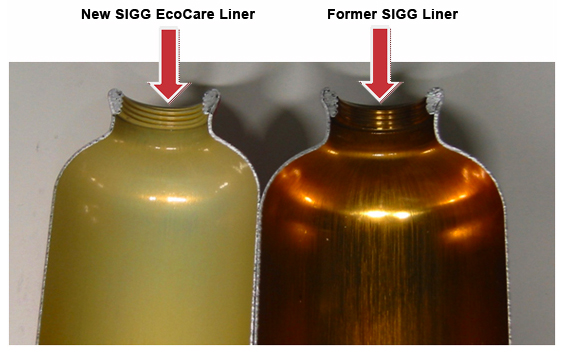 Although there were some news reports that the company would replace old bottles that were mailed in, the company’s site has no details about such an offer. It says the firm stands behind its products old and new, and invites consumers with questions to email the company.

UPDATE: The company will allow customers to exchange old bottles for new, BPA-free ones, but the customers must pay to ship the bottles in.

New Belgium Brewing Company began work this week on a 200kW solar power system, which will be the largest privately owned array in Colorado.

The maker of Fat Tire Amber Ale said the 870-panel array atop the packaging hall at the firm’s Fort Collins facility will cost just over $1 million. The project with Namaste Solar, which is based in Boulder, is eligible for as much as a 40 percent reimbursement from the Department of Energy, New Belgium said.

The system is expected to produce 16 percent of New Belgium's peak electrical load and 3 percent of its total electrical energy use. The company was recently rated by Greentopia as the greenest of 15 large breweries.

How SIGG Lost My Trust

REI Gives New Life to Bottles With Bisphenol A