In a new twist in waste reduction efforts, U.K. retailer Tesco will begin offering customers the option of buying a promotional perishable product and getting the second item later when needed.

The “Buy One Get One Free -- Later” campaign -- one of several initiatives Tesco announced last week -- is billed as a way to help consumers reduce their carbon footprint and trim the amount of waste they send to landfills.

Tesco also unveiled plans to reduce its supply chain greenhouse gas emissions by 30 percent and become a zero-carbon business by 2050.

"It is only by releasing our potential -- as people, as consumers, as users -- that we can turn targets into reality," Sir Terry Leahy, Tesco's CEO, said last week during a speech announcing the program. 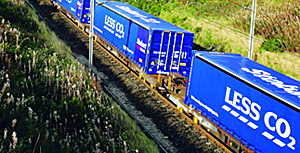 "It will be a transition achieved not by some great invention or a grand act of Parliament, but through the millions of choices made by consumers every day all over the world," Leahy said.

Some have raised questions around how the program will play out.

Marketing Week's Rosie Baker mused whether some consumers will never get around to picking up that second free item, or if the promotion will cause inventory or record-keeping headaches for the retailer.

The program is aimed at another goal of the company: helping its customers halve their personal carbon footprints by 2020. Tesco also launched a Home Energy and Emissions Service to give consumers assistance with home efficiency issues, such as insulation, as well as advice for renewable energy. Its green Clubcard program will be expanded to reward consumers for their environmentally friendly shopping habits.

The company was a early pioneer in carbon labeling, and now sells 114 products that communicate the amount of emissions produced during their manufacture and use.

It plans to expand the program to include 500 products by the end of the year. It recently tapped CA ecoSoftware to help it measure and track its carbon footprint.

As a business Tesco plans to be a zero-carbon business by 2050, without using carbon offsets. The company also announced its goal of cutting its supply chain emissions by 30 percent by 2020.

Tesco to Track Its Mammoth Carbon Footprint with ecoSoftware