Online retailer BuyGreen.com uses only one type of green packaging for its shipments: reused boxes. The Irvine, Calif., company has never purchased a new box to use as packaging, subsisting instead on boxes donated by others or found in the trash.

BuyGreen, which launched its website in July 2007, even makes a point to put a message on every box saying, "Shamelessly shipped in reused packaging."

"We have reused packaging from the start and did it largely because it was the right thing to do and not having to buy new packaging certainly does not hurt either," said CEO Douglas Farquhar. BuyGreen not only sells a wide range of greener products but also explains what about them is green in its BuyGreen Standards fact sheets for each item.

Most of the company's boxes come from a network of local businesses - a supermarket, beauty stores, a shoe store, a cell phone store and others - that save up boxes and let BuyGreen know when they have a bunch ready to be picked up. 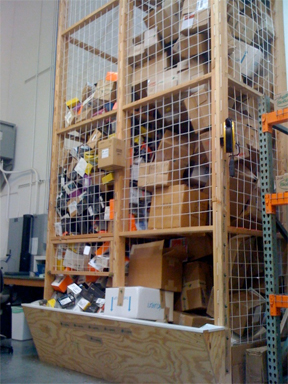 About 70 percent of the boxes the company uses come from its network of businesses. The rest comes from dumpster diving. "We also have a circuit of stores that we know toss out a lot of boxes and we go collect the boxes out of their dumpsters," Farquhar said. "It is scary how many perfectly good boxes get tossed out."

At the company's headquarters they sort the boxes by size into two large towers (right). When packing up shipments, they fill in empty space with sections from Sunday newspapers or reused package filler that came with items they purchased from suppliers. "One thing that is a little bit disconcerting is how many of our suppliers who are sending us great green products, use traditional packaging," Farquhar said. "We always communicate our concern and several have changed."

Eco-Latch Takes the Tape out of Box Reuse

Sustainability and Finding the Right Design Problems to Solve