The Companies Mixing Up Greener Cement

The Companies Mixing Up Greener Cement

You don't have to look far to see just how much concrete humans use. Everything from highways to high-rise and bridges to runways around the world are made with the energy-intensive, carbon-spewing material.

Contributing at least 5 percent of global carbon dioxide (CO2) emissions, the cement industry is ripe for changes to lower its impact. Cement, the glue that binds concrete, is one of the most carbon-intensive materials out there: It produces one ton of CO2 for every ton of cement made.

A number of companies, looking to cut the global impact of concrete, as well as open up huge markets for greener building blocks, are using a variety of methods like replacing concrete ingredients and adding new materials that make concrete waterproof.

The main culprit responsible for the industry's emissions is Portland cement, the most commonly used type of cement, which is created through an energy-intensive process of crushing raw materials and heating them to up to 3,000 degrees Fahrenheit.

Many companies are reducing the amount of Portland cement needed in concrete by replacing some of it with fly ash, a byproduct of coal-fired power plants. In addition to eliminating some of the emissions and raw materials associated with Portland cement, fly ash makes concrete stronger and easier to work with.

While most companies that use fly ash use it replace between 30 and 60 percent of the Portland cement needed, one company, Ceratech, offers a wide range of cement products (below) that are completely free of Portland cement.

Ceratech's products contain 35 to 95 percent industrial waste like fly ash and wood ash. Most of the company's products, which are made through low-energy blending processes, contain 65 percent of higher post-industrial content.

The company also adds a chemical mixture, which Ceratech VP of Marketing Leo Kahl calls a "proprietary secret sauce," to active the fly ash and make it able to create concrete.

Ceratech makes products for both repairing concrete and laying new concrete (bulk products), its products have been approved for use in 41 states and its has done bridge, highway and other road work for transportation departments in Virginia, Pennsylvania, North Carolina, California and elsewhere.

"There is some reluctance when you get into bulk applications because Portland cement is tried and true and has been around for a long time," said Ceratech CEO Jon Hyman. But the company has won over a number of customers through using the repair products first. "We put down thousands and thousands of yards of material," Hyman said.

The Louisiana Tech University's Geopolymer Laboratory has been working to get rid of Portland cement completely as well by using a hard, cement-like paste known as geopolymer.

The lab makes the paste by combining fly ash with a solution of sodium hydroxide and potassium hydroxide (waste products from chemical and petrochemical industries) and liquid commercial sodium silicate. The paste can then be added to aggregate (the material Portland cement is mixed with to make concrete) to make Portland cement-free concrete.

Compared to concrete made with Portland cement, concrete made with geopolymer sets faster, lasts hundreds more years, resists corrosion and fire better, has higher tensile and compressive strength and reduces greenhouse gas emissions from its lifecycle by 90 percent.

U.S. Concrete is another company that uses fly ash as a replacement for up to half of the Portland cement in concrete it makes, and also uses slag, a byproduct from smelting ore to purify metals. When combined with water, ground up slag becomes a cement-like material that can replace up to half of the Portland cement used to make concrete. Because slag strengthens over time, it results in a product that is less permeable and more durable. 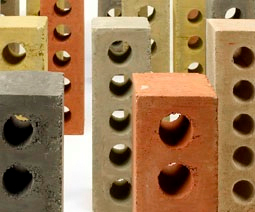 CalStar expects to begin production later this year on the bricks and pavers, which contain 40 percent post-industrial fly ash, 59 percent sand and 1 percent chemicals. The products also require 90 percent less energy and generate 90 percent fewer CO2 emissions than traditional bricks and pavers. Like cement, the main CO2 impact from bricks is the amount of heat that needs to be generated during production. For each brick manufactured, about a 1.3 pounds of CO2 is produced.

Calera Corporation in Los Gatos, Calif., is taking a different approach than other companies in this space: It has developed a way of using power plant CO2 emissions instead of fly ash to create a replacement for Portland cement.

The company has been testing the technology at a pilot plant operating near Dynegy's Moss Landing Power Plant in central California. Calera takes CO2 emissions from the natural gas-based power plant, runs it through nearby seawater, and, through a proprietary method, converts it to a stable mineral carbonate, which it uses to create cement.

The process sequesters half a ton of CO2 for every ton of cement produces. "With cement you're getting a two-for," said Calera founder Brent Constantz, "Because you are also displacing a ton of CO2 from the Portland cement that you didn't use."

Calera's pilot plant currently produces 10 tons of cement a day when it's running (it doesn't operate all the time), but its demonstration plant, also at Moss Landing, will be pumping out more than 1,000 tons a day by Christmas, Constantz said. Calera has three other demonstation plants in the works (two in North America, one in Australia), all situated near power plants.

Another alternative approach to cleaning up concrete's footprint is being taken by New Jersey company Hycrete. The company's eponymous product is a water-based concrete admixture (a material added to the concrete at the time its being mixed) that makes concrete waterproof.

The Cradle to Cradle silver certified hycrete boasts a long lists of benefits: It makes concrete recyclable, reduces water absorption, reduces corrosion, extends the life of concrete and eliminates all of the materials, time and work related with adding waterproof barriers to concrete.

Despite the wide range of processes and uses for these innovations, the companies all make the same boast that their products work just as well, and in many cases even better, than conventional products. But price is also a top-line consideration if these products are to make it to market. CalStar says it's pricing its bricks and pavers to make them competitive with traditional products, and Hycrete's waterproof admixture provides a savings of 20-60 percent when compared to using waterproof membranes.

No matter what road companies take to get there, making the shift toward greener cement, with its lower emissions and higher performance, will lead to concrete savings.

The Anthozoans Are Coming to Save Us! Corals Offer Concrete Solutions to Our Carbon Woes

A concrete way to help the planet