The company's new Ecovio FS biodegradable plastic is initially being developed as a paper coating (such as for paper cups, shown below right) and a shrink film (left). The products are named Ecovio FS Paper and Ecovio FS Shrink Film, respectively. 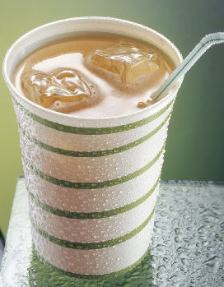 BASF is also launching biodegradable packaging for its Interceptor insecticide-treated mosquito nets, one of the changes suggested by partners that utilize the nets to combat malaria in African countries. BASF is first trialing the new packaging with several thousand nets. If feedback is positive, all nets will come in the biodegradable packaging.

Another packaging change, though not a biodegradable one, is coming to products sold by BASF Crop Protection in Europe. The new plastic containers (below) for crop protection products are lighter, made with 25 percent less plastic and are only made with one type of plastic in order to make recycling easier. 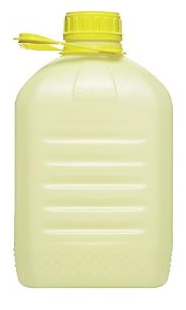 As BASF delves more into applications for biodegradable materials and other greener packaging choices, it is also pulling out of the styrene market. Styrene is used to make polystyrene, which can take the form of expanded polystyrene foam (commonly referred to as styrofoam) or more rigid plastic packaging. Polystyrene is identified with the number 6 resin code and is not commonly or easily recycled.

According to Bloomberg, BASF is looking to turn its styrene division into a joint venture before leaving the styrene market altogether. Dow Chemical is attempting to exit the market as well, since styrene demand has gone down in the past two years (due to companies switching to more easily-recyclable materials either intentionally or because of bans on the material) and companies in Kuwait and the United Arab Emirates have access to cheaper feedstock for making styrene.