Coca-Cola's glittering billboard, a fixture in downtown San Francisco for more than 70 years, has been replaced with a state-of-the-art LED display that's 80 percent more energy efficient while retaining the classic look of the world-renown logo.

The company also is offsetting 100 percent of the electricity used by the billboard through purchase of Green-e certified Renewable Energy Certificates for wind energy from Sterling Planet.

Coca-Cola and the YESCO, the Salt Lake City, firm that engineered, manufactured and installed the retrofit, showed off their handiwork today.

Standing 112 feet above Bryant Street atop a three-story building in San Francisco's South of Market area, the billboard has been a landmark for drivers going to and from the Bay Bridge since 1937 -- the year after the bridge that connects San Francisco to Oakland opened.

The Spencerian script of the logo with its glowing background in a shade known as Coca-Cola Red was originally illuminated with neon. It alternately twinkled and shone for the better part of seven decades, but in recent years began showing its age. 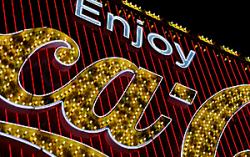 Seventy-feet long and 30 feet high, the new sign is about the same size as its predecessor, but the look at night is crisper and the colors seem more vibrant.

That's largely due to advancements in lighting technology, according to the project partners.

The lumen output of the new sign is similar to that of the old one, said Jeff L. Krantz, an account executive at YESCO.

Krantz and Coca-Cola Energy Efficiency Manage Richard Crowther stressed that while the technology is new, the traditional design has been preserved.

That was the directive from the community as well as the company, they said.

"It was very important to everyone involved in the project to replicate that classic look and feel," said Krantz.

The work to remove the original lighting system and reface the billboard with 4,800 CFLs for the white lettering and strip LEDs for the background started November 30, and the new sign was in place and lit by Christmas Eve, said YESCO project manager Danny Hunsaker.

With eight - to 10-man crews working day and night on the installation project, the billboard was dark for only four days, Hunsaker added.

Ninety percent of the metals and wiring from the original sign were recycled, and disposal of neon and other materials that could not be recycled were handled according to regulatory guidelines, Coca-Cola said.

The company greened its giant sign in Times Square last year. The retrofitting of company signs is part of Coca-Cola's ongoing drive to embed its environmental stewardship credo in all its operations.

The global firm had a big presence at the climate conference in Copenhagen, where CEO Muhtar Kent spent time with GreenBiz.com Senior Contributor Marc Gunther to talk about the company's latest efforts.

Those include its development of the PlantBottle, a container made from recyclable PET plastic, 30 percent of which is sourced from Brazilian sugar cane and molasses, and the company's recently announced commitment to replace all its vending machines using hydrofluorocarbons with coolers that employ more environmentally friendly refrigerants by 2015.

There's also a major campaign to reduce energy use at facilities including those of Coke-product bottlers around the world, said Crowther.

In California, for example, Coca-Cola Enterprises -- the production, distribution and marketing firm that serves as the leading bottler of Coca-Cola products -- is slashing its electricity consumption by 5.6 million kilowatt-hours a year as a result of an energy efficiency overhaul of lighting systems at 24 facilities in the state.

The various initiatives all stem from Coca-Cola's ultimate goal of growing its business without increasing its carbon footprint, Crowther said.

{related_content}As a participant in the World Wildlife Fund's Climate Savers program, Coca-Cola Company has pledged to stabilize its emissions from manufacturing operations in emerging countries and attain a 5 percent absolute reduction in emissions from such operations in developed countries by the close of 2015, using 2004 as a baseline.

More information on Coca-Cola's sustainability work is available at www.thecoca-colacompany.com/citizenship.

Images courtesy of the Coca-Cola Company.

AT&T to Switch to 2.6M LEDs in Signage, Save Millions

Coca-Cola Plans to Green Up its Headquarters