Nike has brought its footprint for greenhouse gas emissions back to 2007 levels and reports progress in other climate and energy areas, but has revisited its carbon neutrality goals and no longer purchases carbon offsets, the firm says in its latest corporate responsibility report.

The world's leading maker of athletic footwear and apparel released the CSR report, which covers fiscal years 2007 through 2009, today.

Nike said its total greenhouse gas footprint (including supply chain but excluding materials) stood at 1.53 million tonnes CO2 equivalent in 2009, which is down from 1.6 million tCO2e in 2008 and far less than the high of 7.5 million tCO2e in 1997-98.

The company's GHG footprint for Nike owned-and-operated sites and from business travel was tallied at 0.12 million tCO2e for last year. That's an increase from 0.10 million tCO2e in 2008. 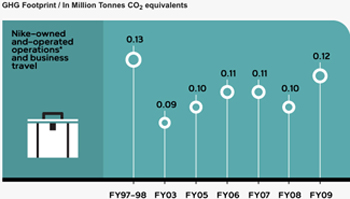 The rise can be attributed in large part to the company's decision in fiscal year 2009 to stop buying carbon offsets and concentrate instead on curbing business travel through increased use of tele- and videoconferencing, boosting energy efficiency initiatives and taking a hard look at the embedded energy in materials and energy consumed in the manufacturing process.

"Moving forward," Nike said in the facilities and travel section of its CSR report, "our preference is to achieve climate neutrality through a combination of energy efficiency and the purchase of more direct forms of renewable energy, through on-site applications and other means."

Nike, a founding member of the Business for Innovative Climate and Energy Policy (BICEP) coalition founded in 2008, offered the following rationale for its decision to no longer purchase offsets:

Other energy and climate accomplishments highlighted in the report include:

In deciding to hone in on the areas where it can make the sharpest reductions in energy consumption and GHG emissions, the firm took a deeper look at the footprint of its operations.

In the process, Nike determined that its average running shoe has a CO2 footprint of about 40 pounds, which includes the embedded energy in all materials used, the making of the shoe and transportation to a company distribution center in the U.S.

Nike also determined that 62 percent of its overall carbon footprint (except for the energy embedded in materials) comes from footwear manufacturing, which in turn accounts for 90 percent of the company's entire manufacturing footprint.

{related_content}Those figures underlie the firm's new vision for product design and the development of its "Considered Design Standards." Nike says it envisions a closed-loop process in which products are designed for recycling, customers can bring their products back to be recycled into new ones, waste that cannot be eliminated is recycled, and products are less reliant on oil and water.

The strategies described in the report reflect a shift from what Nike describes as a "risk management, philanthropic and compliance model" to one that's aimed at integrating sustainable business and innovation (SB&I) principles.

"This report is published at a tipping point," Nike President and CEO Mike Parker writes in the letter that serves as the forward to the report. "It's time for the world to shift. All companies face a direct impact from decreasing natural resources, rising populations and disruption from climate change.

"And what may be a subtle effect now will only become more intense over the next five to 10 years ... We see sustainability, both social and environmental, as a powerful path to innovation, and crucial to our growth strategies ... I believe our work in sustainable business and innovation has equal potential to shape our legacy."

Disney to up the ante on carbon offsets

A credit card to offset your individual carbon guilt