Designer Philippe Starck revealed his two wind turbines aimed for use at homes and small businesses. The Revolutionair turbines, which come in 400W and 1kW versions, are made by Pramac, an Italian power generation equipment company. Because the generators are vertical axis turbines, they can operate in any wind condition and are silent.

Vans is adding to its line of greener skate shoes with the release of limited-edition versions of the Tony Alva Mid Skool 77 Pro and Era Pro (below) that include organic canvas, recycled plastic in the laces and lining, recycled rubber in the sole, and water-based adhesives.

Green Toys Inc. will put out a new line of toys made of 100 percent recycled post-consumer milk bottles. The seven-item My First Green Toys line will be aimed at kids as young as six months, are free of bisphenol A, phthalates and PVC, and manufactured and assembled in California. 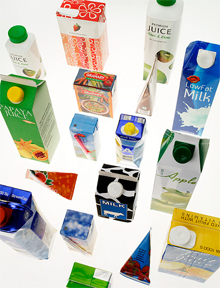 hes, and toothpaste tubes. Aseptic cartons, which are made of layers of paper, plastic and aluminum, have grown in popularity because they are lighter than other materials, but they are more complicated to recycle and are not accepted by some recycling companies and programs. Enval has a patented technology for removing aluminum from such packaging, and runs a pilot plant in Cambridge.

Biome Bioplastics' new BiomeHT class of bioplastic has a higher temperature resistance than Biome's other products. The BiomeHT has a softening point of more than 90 degrees Celsius in wet and dry conditions, along with improved stiffness. The material contains 80-95 percent renewable resources, depending on the grade, and is being positioned for use in cutlery and plates used for hot food, cups and lids, casings for electronics exposed to heat and some auto parts.

Arizona State University joined the Biomimicry Institute's Biomimicry Affiliate Program. The university is the first U.S. institute to become an affiliate. The program provides for collaboration on biomimicry-based courses, joint grant opportunities and the development of biomimicry-based technologies and ventures at ASU.

The Canadian Chemical Producers' Association renamed itself the Chemistry Industry Association of Canada in order to "reflect the changing face of the chemistry sector and its renewed commitment to environmental sustainability." In 2008, the group added sustainability as a driving force behind its Responsible Care commitments.

At Tetra Pak, Trash Gets a New Lease on Life