Has the Economy Helped or Hurt the Growth of Green Business?

The Great Recession and the fledgling recovery from it have been the big stories in the business world for the last year, but a new report from GreenBiz.com shines a light on how the economy has shaped the environmental impact of business operations.

The third annual State of Green Business report, published today, explores in-depth the data behind the growth of green business, to find out whether and how companies are moving the needle toward sustainability.

"The good news is that green business didn't go away during this recession," GreenBiz.com executive editor Joel Makower said during a press conference this morning. "What makes this recession notable over recessions from the last 20 years, other than the scale of it, is that the green business professionals were not the first ones to be thrown overboard."

This trend shows that business leaders are taking the environmental performance of their firms as seriously as the economic performance. In a survey of more than 2,700 members of the GreenBiz Intelligence Panel, about 80 percent of the respondents said that their companies would spend the same or more money on environment, health and safety as they did in the last year.

The report, launched today as a precursor to two State of Green Business Forums -- one happening in San Francisco on Thursday, Feb. 4, and one happening in Chicago on Tuesday, Feb. 9 -- shows that environmental improvements and innovations became a means of surviving lean times, and being more competitive once things rebound.

Some of the trends analyzed in the report, which is available as a free download from GreenBiz.com/StateOfGreenBusiness, include a steady improvement in such areas as reducing the environmental impact of information technology, increasing the amount of certified green office space, reducing paper use and increasing its recycling, and reducing the amount of water used to run the economy.

Of the 20 measures of progress assessed by the annual GreenBiz Index, six were shown to be making significant progress and three were determined to be losing ground; the remaining 11 indicators were deemed to be "treading water" — that is, holding steady or making incremental progress, insufficient to the scale of the problems that need to be addressed.

Among the other key trends noted in this year's report is the notion of "Radical transparency -- the virtuous circle that develops when detailed information about companies, products and ingredients is instantly available, enabling consumers to make smarter choices, thereby moving markets toward less-harmful products." The report points to a wide range of efforts by independent websites, major retailers like Walmart, nonprofit environmental groups, and the mainstream media that are divulging detailed information about products' environmental attributes being made available as never before.

The growth of green automobiles was another positive sign. While individual car buyers stayed out of showrooms during 2009, pushing the world's automakers to the brink, corporate and institutional buyers proved a bright spot for the industry. Fleet buyers ramped up their purchases of hybrid-electric, diesel, biodiesel, electric and other so-called alternative-fueled vehicles, from taxis to trucks. These buyers continued leadership role will be critical to electric-vehicle manufacturers' hopes of growing sales and lowering costs. 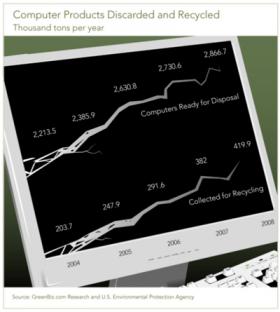 Disposal of electronic waste was seen as a trend that is doing poorly, when measured by the amount of waste being recycled compared to the amount coming into the waste stream each year. According to the report, only about one-seventh of the nearly 3 million tons of e-waste disposed of in the U.S. is being recycled, an amount that hasn't grown much over the past few years.

On the other hand, the amount of water needed to produce each dollar of U.S. gross domestic product has dropped steadily over the past decade, and about 30 percent over the past 25 years. The improvements come largely from industrial use, energy companies and utilities, and manufacturing and mining processes.

"The green economy is alive and well, even during tough times," said Makower, who has been covering green business since the 1980s. "There are encouraging signs that innovation and clean technologies, as well as more efficient business operations, can help the U.S. emerge more competitive as the economy recovers."

The State of Green Business 2010: Alive and Kicking

Companies Made Bigger, Bolder Commitments to Green in 2010

State of Green Business 2009: Green is Growing, But Not Fast Enough

Experts Gather to Discuss the State of Green Business