Ford is expanding its alternative-fuel fleet offerings with the all-electric Transit Connect commercial fleet van, a new Transit Connect Taxi and the ability for all Transit Connect models to be converted to run on compressed natural gas or propane.

The all-electric Transit Connect, announced ahead of the Chicago Auto Show, will be available later this year, offering the ability to drive 80 miles on a full charge, with a top speed of 75 miles per hour. The vehicle is aimed at city and suburban short-range driving and at fleet operators with predictable routes.

Ford and Azure representatives said that although the vehicle has not been marketed much to companies previous to its announcement, they know that they have business customers who have either been asking about this type of vehicle or would be interested in it selling points of zero emissions, zero gasoline use and little maintenance. [Full disclosure: Ford paid for my air travel and lodging to attend this press event.]

The Transit Connect Electric can be recharged with a standard 120V outlet or a 240V charge station that can be installed, offering charging within six-eight hours. Plugging the vehicle in charges up the Johnson Controls-Saft 28-kilowatt-hour lithium-ion battery pack, which is then used to charge an onboard 12-volt battery that powers the headlights, power steering and other components.

The other vehicle launched by Ford is aimed at cleaning up taxi fleet emissions. When powered with gasoline, the Transit Connect Taxi's 2.0-liter, four-cylinder engine and automatic transmission has a 30 percent fuel 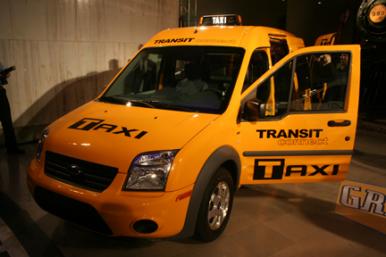 economy improvement over many traditional taxis and offer 23 miles per gallon, according to Ford.

But Ford is also introducing for all Transit Connect models, including its new taxis, the ability to convert the engine to run on compressed natural gas (CNG) or propane (liquefied petroleum gas/LPG). Both fuels are cleaner than gasoline, with CNG emitting 30-40 percent fewer greenhouse gas emissions.

The Transit Connect Taxi (right) will be available for ordering in April and be in production in summer. Gerry Koss, Ford's fleet marketing manager, said when he went around to seven cities feeling out potential customers, many said that if it were available at the time, they would have started using it.

"The excitement was there that gave us the confidence to go forward with it," he said.

The Transit Connect Taxi, he said, was built as a commercial vehicle, with taxi features in mind. The rear seat was moved back three inches to provide enough legroom for passengers, the vehicle sits 6.5 inches off the ground, and climate controls were added for passengers in the rear. The controls sit below a screen that displays the cab fare, a map of the taxi route, news, weather and more. Rear-seat passengers can also pay from their seat with a card-swiping device, and they can use the touchscreen to select how they want to pay. The payment and information technology was developed in collaboration with Creative Mobile Technologies.

Ford's other auto show news includes the new Ford Edge, which will be able to come with a 2.0-liter I-4 Ecoboost engine with direct fuel injection and a single turbocharger, offering 10 percent better fuel economy than comparable V-6s.

The 2011 Ford Shelby GT500's new aluminum-block engine will be 102 pounds lighter then the previous Shelby engine, offering improved fuel economy, with a projected 23 mpg for highway driving and 15 mpg in city driving, up from the 2010 model's 22 mpg highway and 14 mpg city.

Ford Adds Smaller EcoBoost Engine, Will Be In 90 Percent of Vehicles by 2013

Ford: 'Boosting and Downsizing is Our Strategy'