Last week brought the unveiling of the Bloom Energy Server, a fuel-cell energy generator that spent many years shrouded in secrecy and hype. Now that it's out, well, the hype remains to be verified or dispelled.

In a nutshell, the Bloom Energy Server takes natural gas, biogas, or other hydrocarbons and converts them to energy. Eventually, Bloom Energy plans to be able to use solar or wind power to provide fuel for the server, but that technology is not in play yet. The innovation in a Bloom box is its use of common, low-cost materials -- a type of silicon -- in its fuel cells. As a result, the Energy Server can generate electricity at the competitive rate of eight to 10 cents per kilowatt-hour.

To date, eight companies -- major players all -- have purchased Bloom boxes, an investment of $700,000 to $800,000 per box. Although Bloom Energy predicts a three- to five-year payback on the boxes, and a lifespan of 10 years with "reasonable maintenance," this is not the kind of acquisition a company makes lightly.

To find out what drove these companies to sign on with Bloom Energy, we spoke to several proud owners.

eBay's San Jose campus was the location of Wednesday's Bloom box launch party, a press event featuring industry and political stars alike. The company purchased five boxes last year and has been running them all since last fall with no problems. eBay is currently powering the servers with natural gas, but is finalizing a contract to run them on biogas.

"Since day one, we've seen that this can help us with our commitment to reduce our carbon emissions," explained Amy Skoczlas Cole, the head of eBay's Green Team. eBay plans to get the company's carbon footprint 15 percent below 2008 levels by 2015, and the Bloom boxes will help them hit that goal.

Coupled with the massive solar array on the campus -- 3,248 solar panels that take up 65,000 square feet of roof space and generate 650 kilowatts of energy -- eBay is now able to generate 33 percent of the campus's energy on-site and off the grid.

In making the case to senior management for the Bloom purchases, Cole said the solar array figured into the discussion in two ways. "We had gone through the process and understood what it took to make the business case to executives -- we had a little bit of a road map to follow [for the Bloom discussions], because we'd already figured out how the business might think about an investment in renewables."

Secondly, eBay was simply out of roof space for more solar. Each Bloom server takes up the area of a parking space, so installing five of those on the campus grounds was an option where adding more solar panels was not.

Cole cited several arguments used in making the sale to eBay executives: First and foremost was the company's need to achieve their greenhouse gas reductions goal. Secondly, CEO John Donahoe had begun shifting the company to be more visible and aggressive in its environmental commitments, and being the first on the Bloom bandwagon sent a prominent green signal. Thirdly, Cole said, "We are a Silicon Valley firm that shares some common DNA around the concept of disruptive technology -- we understood the power of this kind of disruptive technology."

And finally, for a company with a deep commitment to engaging its employees around environmental initiatives (the employee-led green team was responsible for bringing the solar array to fruition in the first place), Cole said the Bloom boxes are a point of pride for its 15,000 employees that eBay is an early adopter of these kinds of projects.

When it came to making the decision about signing on with Bloom Energy, FedEx followed much the same path as eBay: Be disruptive, innovative and forward-thinking.

The similarities to eBay's project don't stop at embracing disruptive technologies. The FedEx West Coast hub in Oakland, Calif., that is now the home of five natural-gas powered Energy Servers also has a 904-kilowatt solar array on its roof, just as with eBay's dual-energy system.

Between the Bloom boxes and the solar array, the facility, which handles about 250,000 packages a day, generates 75 percent of its energy needs. The remaining 25 percent comes from the grid. But the Bloom boxes cover the base load of energy the facility requires, and when the Blooms and the solar panels are pumping out juice, the hub is able to feed power back into the grid, which under California's net metering rules allows FedEx to save money on its energy bill.

The top-level motivation for FedEx in acquiring its Energy Servers was, in addition to embracing innovative technology, "to find a cleaner source of reliable energy that operated 24/7," Jackson explained. The boxes "made our operations and the work we did for our customers more reliable and cleaner." Adding in the fact that a long-term contract for natural gas for the boxes will save the company stacks of cash over the coming years, and FedEx saw the economic and environmental benefits right away.

Cox Enterprises keeps a slightly lower green profile than many of the other early-adopting companies on Bloom Energy's client roster. (The full list of companies, for those keeping score, includes eBay, FedEx, Cox Enterprises, Walmart, Coca-Cola, Staples, Bank of America, and Google.) Cox announced its Cox Conserves environmental initiative in 2007, with a goal of reducing its energy use by 20 percent by 2017. Since then, the company has worked with a number of partners to cut the energy used by its PCs, eliminated 80 percent of the waste in its cafeteria, and rolled out hybrid trucks in six states.

The company finished installing four Energy Servers outside its KTVU television station in Oakland, Calif., in January, and they've been running at 98 percent of the rated capacity for nearly two months. In that time, Halter said that the boxes have prevented 263 tons of CO2 equivalent emissions -- annually, she expects the project to produce more than 3.4 million kWh of energy and more than 2,000 tons of avoided greenhouse gas emissions each year.

All these projects are in California largely because of their proximity to Bloom Energy headquarters in Sunnyvale. In fact, Bloom negotiated the contract to provide Cox with the biogas used to power its Energy Servers.

{related_content}The breadth of Cox's environmental activity made the acquisition of Bloom boxes a relatively easy sell. According to Elizabeth Halter, the company's public relations manager, the Energy Servers made simple, good sense.

"The Bloom fuel cells are a great opportunity for us to use a technology that fits into our overall program of being a good corporate citizen," Halter explained. But at the same time, the fact that the boxes are generating power more cheaply than the local utility can makes the business case a matter of fact.

The Bottom Line: To Buy or Not to Buy?

In talking with three companies of very different sizes, working in very different industries, one consistent point kept arising: These firms all made the decision to buy Bloom Energy Servers to support their environmental initiatives. 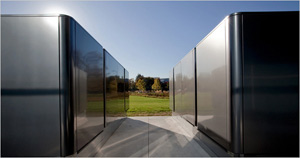 That doesn't mean there isn't a strong business case backing the decision up -- it's safe to say that none of these purchases were philanthropic or driven solely by the desire to polish their green credentials.

In the future, Bloom CEO KR Sridhar has said that the Energy Servers will have the ability to run on wind or solar power, making them a desirable choice for zero-emissions energy, off-grid operations, and other such uses. And the company hopes to see the prices drop to just $2,000 per Bloom box -- which opens the door to just about any organization.

But today, based on these interviews, purchasing a Bloom box mostly makes sense if any or all of the following is true:

• Your company is sitting on millions (or billions) of dollars in revenue (i.e., you're Apple);
• You're in the midst of building or renovating a facility, or are already planning an investment in renewables or alternative fuels; or
• Your sustainability initiatives need a jump start (and you've got the budget set aside).