More than three million U.S. citizens are expected to descend on local parks and schools with brooms, shovels and garbage bags over the next three months as part of the Great American Cleanup, an initiative of the nonprofit Keep America Beautiful (KAB).

Employers recruited a significant slice of those volunteers as they move in increasing numbers to introduce formal volunteer activities as part of their larger corporate responsibility programs. Aside from the always-attractive opportunity to engage employees and generate public goodwill, many argue volunteerism also carries with it a compelling business case. 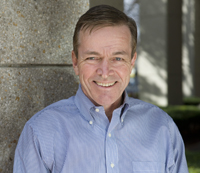 "A good volunteer is a good corporate employee with the skill set needed to be a volunteer: the ability to work in teams, they're very self directed, they help others in projects that aren't necessarily their own," said Matt McKenna, KAB executive director (pictured at right).

"When times are difficult, people tend to assume more responsibility," McKenna said. "That sense of responsibility is often reflected in a willingness to volunteer." 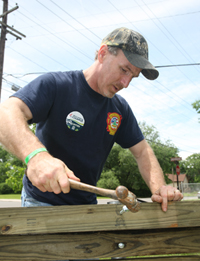 This eagerness to help others with projects with which they bear no responsibility is an attractive quality to many employers, which have long tried to pinpoint the ingredients of a successful worker, according to McKenna, a former finance executive at PepsiCo who took the helm at KAB two years ago.

A successful employee is obviously a package of many qualities, but the attribute that has most intrigued him is "affiliation" -- the ability to work with other people as part of a group.

"That sense of teamwork comes from a willingness to go with the collective judgment of the group, to be a good teammate," McKenna said.

Volunteerism gives workers the chance to cultivate these types of strengths they can then bring back into their 9-5 jobs, according to Carole Puls, a spokesperson at Eli Lilly, a pharmaceutical company that hosts one of the largest KAB events near its Indianapolis headquarters. 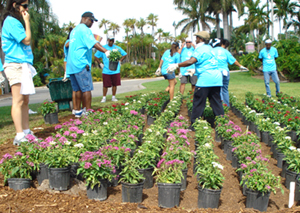 "From a corporate perspective, we look at this as a way to not just engage employees, but also as an opportunity for employees to hone different skills or increase skills they already have, such as project management and leadership," Puls said. "A lot of transferable skills are gained, but most importantly, they are engaged and feel like they are giving back to the community."

More than 8,800 Eli Lilly employees worked last year with Keep Indianapolis Beautiful, a KAB affiliate, on more than 50 community improvement projects in a single day, including the beautification of a section of the local interstate. More than 22,000 Eli Lilly employees participated in the company's larger Global Day of Service.

"That means from sunrise to sunset," Puls said, "someone from Lilly was taking part in a volunteer activity."

How AMD mobilizes a green army

Earth Day 2011: What Works, and What Doesn't, to Engage Employees