A coalition of environmental and advocacy groups staged a red carpet event this week to spotlight a slew of what they call "bad actors" -- pervasive toxic chemicals that consistently behave poorly.

The Toxies, timed to the upcoming Oscars, honored both familiar and little-known toxic chemicals with awards reminiscent of an Oscar or Razzie nod, such as Worst Makeup, Worst Special Effects and Worst Ensemble.

Bisphenol-A, a chemical found in hard plastics and packaging that has made headlines and come under fire over the last year, received two awards: Worst Breakthrough Performance and the Viewer's Choice Award as Worst Chemical of 2009. Lead, found in a wide swath of products ranging from paint and children's toys to jewelry and artificial turf, won a Lifetime Achievement in Harm award for its sheer ubiquity. Toluene, formaldehyde and DBP were named Worst Ensemble.{related_content}The awards, sponsored by Californians for a Healthy and Green Economy (CHANGE), were concocted to communicate to the public the dangers of these toxic chemicals, which are "unapologetically and unabashedly evil," according to Martha Dina Argüello, executive director of the Los Angeles chapter of Physicians for Social Responsibility (PSR), a CHANGE member.

"For a number of years, we've been calling these chemicals 'bad actors,'" Argüello told GreenBiz.com Thursday. "We thought about doing a riff on bad actors and we talked about doing a report, but we needed a popular way of talking about these (chemicals) to show how we keep treating these bad actors as though we can contain them."

The event was also timed to raise awareness of the state Department of Toxic Substances Control's Green Chemistry Initiative, which will release final draft regulations this year.

"Part of this is about getting more people interested in the regulations and making sure they're as strong as possible," Argüello said.

CHANGE, which includes NGO dedicated to labor, policy, environmental and health issues, released a report to complement the Toxies, including tongue-in-cheek bios and headshots of the "bad actors" and policy recommendations for the Green Chem 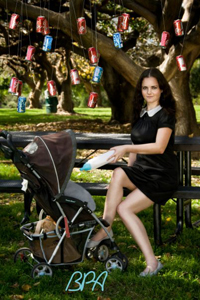 Top policy recommendations revolve around requiring chemical manufacturers to prove chemicals are safe before they are released into the market, giving regulatory agencies the power to restrict or ban dangerous chemicals, and ensuring that the public has access to chemical information.

The Toxies, Argüello said, carries a larger message for businesses: There is a demand for both chemical information and products made without toxic chemicals. According to CHANGE, there are roughly 85,000 chemicals on the market but the health effects of nearly half haven't been studied at all.

Here is a full list of the awards, followed by a slideshow of actors portraying each chemical:

Lifetime Achievement in Harm: Lead, used in everything from paint and lunchboxes to candy and children's toys, can interfere with children's intellectual and behavioral development.

Worst Replacement Actor in a Series: Methyl Iodide, a soil fumigant recently registered for use as a pesticide.

Worst Performance in a School Drama: Hexavalent Chromium, a known carcinogen and most toxic form of the element chromium used in industrial processes. 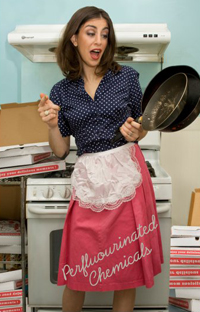 Worst Costume: Perchlorethylene, commonly used in dry cleaning but can cause dizziness, nausea and organ damage.

Worst Performance in a Horror Film: Hydrofluoric Acid, a compound used in the production of refrigerants, herbicides, aluminum, plastics and high-octane gasoline.

Worst Breathtaking Performance: Formaldehyde (also part of the Toxic Trio), an organic solvent found in paints, glues and cleaning products, and a relative of benzene, which is known to cause leukemia.

Worst Local Performance: Flame retardants, the family of Polybrominated Diphenyl Ethers (PBDE) used to slow flames is used in a variety of products, such as bedding and furniture, but can accumulate inside people, pets and the environment.

Toxic chemicals can enter food through packaging, so we made a list