Behind PepsiCo's Big Push to Generate Its Own Green Power

Behind PepsiCo's Big Push to Generate Its Own Green Power

PepsiCo made headlines in 2007 when it committed to buying enough renewable energy certificates (RECs) to match the energy used in its U.S. facilities.

The purchase set a record: More than a billion kilowatt-hours annually for three years, or enough to power nearly 90,000 homes.

Today the company announced it is changing course, opting instead to reinvest the funds in onsite renewable energy projects that will allow it to more directly reduce its carbon footprint. PepsiCo will spend more than $30 million over the next three years developing green power projects in the U.S.

"Our strategy has advanced to a point where it makes the most sense to invest in alternative energy projects within our own operations," Rob Schasel, PepsiCo's director of energy and resource conservation, wrote in a column today breaking the news at GreenBiz.com.

The move makes PepsiCo the latest company to roll back its participation in the voluntary carbon market in favor of direct action. The first in a series of new renewable energy projects included in the $30 million initiative are in various stages of development, with a few likely to go online in late 2010, Schasel said. They will follow a string of successful renewable energy projects which he said were instrumental in today's decision. 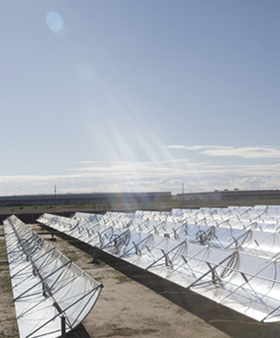 In 2008, for example, the company flipped the switch on a five-acre solar concentrator system in Modesto, Calif. that helps to power a Frito-Lay SunChips plant (pictured above and at right). The project also provided the company with a prime marketing opportunity while also drastically cutting greenhouse gases and its reliance on natural gas.

PepsiCo won't completely abandon RECs going forward, but new purchases will be less than 10 percent of those previously bought, mostly for LEED-certified projects.

Its contract to match all of its energy use for three years with RECs purchases expired at the end of 2009. When first announced, the contract propelled PepsiCo to the upper echelon of companies comprising the U.S. Environmental Protection Agency's largest Green Power Purchasers. Schasel described the company as feeling very pleased with its experience.

"We saw an opportunity to enter a market that was at that point just forming and gain experience," Schasel said. "We wanted to help that market achieve a level of critical mass and scale, and also get experience with renewable energy projects."

It was a noteworthy purchase that demonstrated significant leadership, according to Blaine Collison, Green Power Partnership director, especially when combined with PepsiCo's independent bottlers hopping onboard.

"It was a sizable piece of market transformation," Collison said.

Schasel described PepsiCo's pivot away from RECs toward onsite renewable energy as an evolution of a sustainability strategy that is under constant evaluation.

The company's 2015 environmental targets include improving electricity use efficiency by 20 percent and reducing greenhouse gas intensity by 25 percent. PepsiCo is also committed to reducing absolute emissions and is in the process of setting a goal.

"Our decision to invest in renewable energy opportunities is a part of that," Schasel said.

Although RECs comprise about 75 percent of the total clean energy purchased by the EPA's Green Power Partners, PepsiCo isn't alone in its emerging preference to generate electricity on its own, Collison said. {related_content} "Especially in last 18 to 24 months, we've seen a fairly dramatic increase in partner commitments to onsite renewable energy," he said.

In a similar vein, Yahoo and Nike reduced their use of carbon offsets in favor of projects that would directly cut their emissions and energy use, such as pursuing less energy-intensive data centers and reducing business travel using tele- and videoconferencing.

Renewable energy and energy efficiency investments offer a similar business case, according to Ryan Schuchard, manager of environmental research and innovation at BSR.

"Reduced costs over time, reduced risks of shocks in price volatility and supply," Schuchard said. "Those are the two big ones."

"I think renewable energy and energy efficiency lend themselves to being scalable," Schuchard said, "and companies are looking for ways to build on what they've done."

Why PepsiCo is Changing its Renewable Energy Strategy

What it takes to get corporate clean energy deals done