In this gathering of design news, a lubricant maker has introduced packaging with less plastic, a gelato chain has switched all plastic items to compostable versions, and Denmark becomes the latest government to ban BPA.

Motor oil and lubricant maker Q8Oils has introduced a new bag-in-box packaging that cuts plastic use. The OilQube consists of a plastic bag with nozzle inside of a cardboard box. The packaging uses 84 percent less plastic than typical large plastic jugs, allows for efficient stacking and transportation, and pours more smoothly than jugs, making it possible to reduce waste from spilling. The new packaging will be used first for commercial plant and agricultural lubricants.

Italy-based gelato maker Grom has replaced its plastic spoons, gelato tub liners, trash bags and to-go bags with bioplastic versions. Grom is using products made with Mater-Bi, a plant-based bioplastic created by Novamont that meets the Italian Organization for Standardization requirements for biodegradable and compostable items. Grom also uses Forest Stewardship Council certified paper for its gelato tubs, cups, napkins and packaging, all of which it collects at its stores for composting. Grom operates more than 35 shops in Italy and also has locations in New York, Paris and Tokyo. 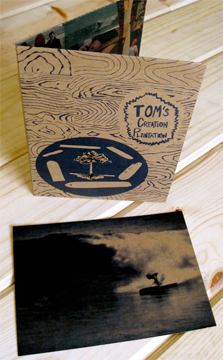 upcoming release, "Tom's Creation Plantation." The packaging is made of kraft paper with 50 percent post-consumer recycled paper content and is printed with vegetable-based inks.

Denmark has banned the use of bisphenol A (BPA) in products intended to be used by young children to consume food. The ban, which goes into effect in July, affects bottles, feeding cups and packaging for food aimed at kids age 3 and under. The government is calling the ban a temporary measure that will be lifted only if new studies show that low doses of BPA do not affect rats' nervous system development or behavior. Denmark joins Canada and a number of U.S. states, cities and other governments in banning the use of the chemical, which has been connected to a wide range of developmental problems, cancer and other health issues in lab tests.

Gamepro takes a look at the environmental efforts of the video game industry in this article, highlighting some of the steps by the big three console makers - Nintendo, Sony and Microsoft - to reduce their impacts, including toxin elimination, providing energy-saving settings, using recycled plastic in consoles and switching to packaging with less materials. Although there is some disparity among their actions, the companies are nevertheless working to reduce some of the negative impacts of a multibillion-dollar industry.