Failure to address water risks and other critical issues posed by aging or inadequate infrastructure could further impede the U.S. economy and America's attempts to regain global competitiveness on a number of fronts, a new study warns.

That's the conclusion of "Infrastructure 2010: Investment Imperative," the fourth in an annual series of reports produced by the Urban Land Institute and Ernst & Young that examine infrastructure trends around the globe.

Earlier reports focused on transportation and the latest report updates previous findings with information showing that the U.S. continues to lag behind Asia and Europe in investments in transit systems. In addition this year, the report takes its first hard look at water issues:

"Falling behind global competitors, the United States struggles to gain traction in planning and building the critical infrastructure investments that are necessary to ensure future economic growth and support a rapidly expanding population ... Perhaps no other infrastructure category presents the United States with greater challenges than water," the report said.

Howard Roth, global real estate leader at Ernst & Young, underscored the urgency of the infrastructure problems in a media briefing today and in an announcement of the study's release.

{related_content}"Over the past several years that we have been co-producing this report, perhaps the most troubling conclusion overall is that the world is moving ahead in rebuilding and expanding its infrastructure without the United States," Roth said. "Bottom line, the U.S. is seriously threatening not only its quality of life now and for the future but also its very basic ability to compete economically with the rest of the world."

In the media briefing, Roth, ULI Executive Vice President Maureen McAvey, Malcolm Bairstow, an Ernst & Young partner in London, and  Mike Lucki, global construction and infrastructure leader for Ernst & Young, provided an overview of the challenges facing the U.S. from a domestic standpoint as well as from global perspective. They also touched on possible solutions.

For the U.S., infrastructure was a "backburner issue" when ULI and Ernst & Young began its scrutiny of the area four years ago, the presenters and the report said. But now "noncompetitive and deteriorating infrastructure systems -- transportation, water, dams, and power" are of critical concern.

The problem becomes apparent when considering that the 14 cities and their greater metro areas are expected add 60 million people to their populations by 2030, McAvey and Roth said.

Overall the U.S. is expected to add 120 million more people by 2050 despite existing water constraints, the presenters noted, adding that the country's water footprint is already among the largest in the world and almost double the global average.

"If you look at infrastructure vs population grown, we're on a totally unsustainable path," McAvey said. 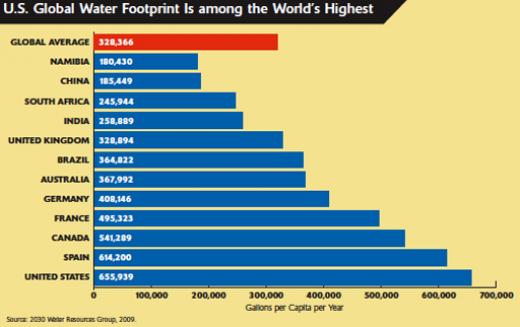 The presenters cited waste from old, leaking pipes and failure to conserve as the chief reasons for the hugh water footprint. Neglected leaks are responsible for 1.25 trillion gallons of wasted water annually  --  roughly the consumption of Los Angeles, Miami and Chicago combined, according to the report.

Further water challenges include high growth and high usage even in arid areas of the country and threats of water contamination from industrial chemicals and agricultural runoff. Lack of cooperation among local and regional authorities can contribute to water problems.

In offering solutions, some of the report's strategies are similar for water and transportation such as:

The report recommended that the U.S. look to Australia, the world's driest inhabited continent, as an example of how to manage growth against water constraints.

Overall, the report said that Americans should rethink how they pay for infrastructure and its maintenance. Considerations include:

"Investing in infrastructure -- done well and strategically -- can help ensure increasing prosperity and the rising standards of living that Americans have come to expect," the report said.

More information about the report, which was released at the ULI Real Estate Summit in Boston, is available at www.uli.org

Images and charts courtesy of ULI and Ernst & Young.

US Infrastructure Woes Mount to $2 Trillion for Repairs Alone

The Triple Threats of Our Coming Water Crisis

Can Big Data save our water infrastructure?