Enviance and FirstCarbon Solutions unveiled newly enhanced carbon accounting software products this week aimed at helping a growing number of companies in a variety of sectors measure and manage their carbon footprints.

Version 6.4 of the Enviance System offers users an upgrade of the software that tracks greenhouse gas emissions and an additional 1,600 environmental pressure points.

"It's moving toward much richer content, a richer interface," said Greg Scandrett, vice president of product management at Enviance. "It gives users the ability to predefine how they want to use the application."

One of its biggest draws is the dashboard's improved functionality, which allows users to take action right away. "If the user sees something amiss, sees data moving in a direction they didn't expect, they can conduct further analysis, gather additional data and launch a corrective action workflow, right from their dashboard," Scandrett said.

Enviance also launched this week another application named Quick Data 2.0, which has an interface designed to speed and ease the data entry process to suit individual user needs or preferences. Users can link to the application from the Enviance system. 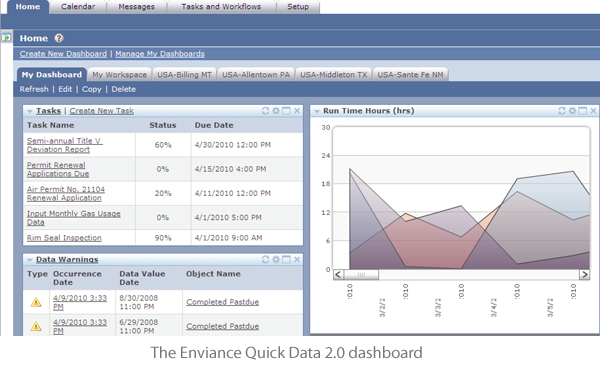 Continued next page ...
Meanwhile, FirstCarbon released ghgTrack software and related services under its own banner for the first time Tuesday.

The software was originally developed by Enverity, which FirstCarbon acquired last year. FirstCarbon was drawn to the ease of use, simplicity and capability for an uneducated user to self-implement ghgTrack, which FirstCarbon then enhanced and re-branded, said Dailey Tipton, FirstCarbon's vice president of sales and marketing.

The software allows users to track additional metrics, such as recycling, waste or water use, and accommodates a variety of reporting standards. The company moved the dashboard to the front end, so it emerges immediately at log-in with a graphical summary of emissions, year-to-date performance and goals.

It includes a seven-step process for implementation through which FirstCarbon will walk users, or it will perform the implementation on their behalf as part of a broad range of consulting services that also includes carbon market asset and data management.

Monthly subscriptions for ghgTrack start at $500 per standard site and $900 per industrial site, with discounts given for additional sites. 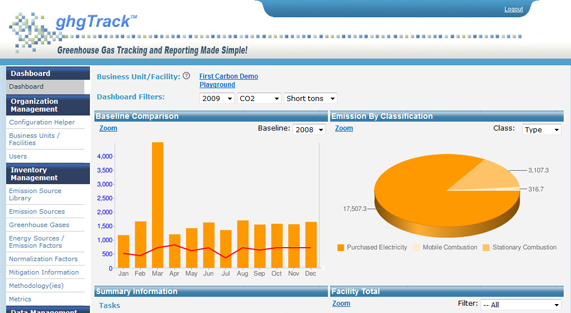 The company views its potential market in three segments. First, there are the historical smokestack industries that typically have existing monitoring systems in place; Tipton envisions ghgTrack working alongside more complex systems or as a replacement for legacy systems that are difficult to use.

A second segment of the potential market includes those organizations that have historically relied on spreadsheets, such as smaller chemical and manufacturing companies that are increasingly feeling supply chain pressure to measure and reduce environmental impacts. Finally, there are the newcomers that have never had to worry about tracking emissions, such as banking or real estate companies.