The Princeton Review and the U.S. Green Building Council have released a free online guide to the 286 greenest colleges and universities in the United States.

The 198-page “Guide To 286 Green Colleges” became available today in acknowledgment of the 40th anniversary of Earth Day, which is Thursday, and of the growing importance of sustainability among college students and their parents.

“Our research has shown that students and their parents are becoming more and more interested in learning about and attending universities and colleges that practice, teach and support environmental responsibility,” Princeton Review Senior Vice President and Publisher Robert Franek said in a statement announcing the guide. 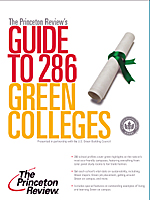 “In fact, 64 percent of the nearly 12,000 college applicants and parents who participated in our recent College Hopes & Worries Survey said having information about a school’s commitment to the environment would impact their decision to apply to or attend it," Franek said.

{related_content}The colleges and universities listed in the new guide scored in the 80th percentile or better among a pool of 697 schools that received a Princeton Review green rating in 2009.

The Princeton Review, creator of much-consulted annual college guides, launched its green rating system in summer 2008, just in time for the 2009 edition of its "Best Colleges Guide." The USGBC, whose campaign to green buildings includes programs for schools at all levels, was a key contributor in the development of the Review's Green Rating survey.

The added dimension to the Review's ratings system proved to be highly popular among students and parents, as Franek noted, prompting the publication of the guide released today. The new guide focuses on the green attributes of colleges and universities whose curriculum, facilities, operations and administration demonstrate "an exceptional commitment to sustainability," Franek said.

In addition to providing healthier learning environments and cutting costs, green campuses produce graduates who "become incredible drivers of change when they call for similar surroundings in their jobs and communities," said USGBC President, CEO and Founding Chair Rick Fedrizzi.

The Princeton Review also maintains a Green Honor Roll of the campuses that achieve a score of 99, the highest possible in the Green Rating system. The most recent list was released last year. Its 15 members are:

The guide to green colleges is available from The Princeton Review at www.princetonreview.com/greenguide and from the USGBC at www.usgbc.org/campus.

In another campaign to highlight sustainability efforts among colleges, the U.S. Environmental Protection Agency recognized the University of Pennsylvania as the winner of the 2009-2010 College and University Green Power Challenge. The university took the title for the fourth consecutive year as a result of its purchase of more than 192 million kilowatt hours (KWh) of green power, which amounts to roughly 46 percent of its energy purchases.

More information on the Green Power Challenge and the standings of the 53 other colleges and universities participating in the contest are available from the EPA at www.epa.gov/greenpower/initiatives/cu_challenge.htm

What are the 10 coolest universities?