North American businesses expect to spend more on energy efficiency in the next 12 months despite economic uncertainty that has had a mixed impact on recent investments and current attitudes about reducing energy use, a new study says.

Overall, the fourth annual Energy Efficiency Indicator -- presented by Johnson Controls Inc., the International Facility Management Association and this year for the first time, the American Society for Healthcare Engineering -- provides a favorable outlook for energy efficiency investments in the near future. It also compares business leaders' past and current views and actions on managing energy consumption.

The indicator is a survey conducted each March of decisionmakers ranging from building owners, proprietors and facility managers to C-level executives who are responsible for commercial buildings, the sites' energy use and the capital or operations budget for facilities -- or have a say on how money is spent for efficiency. This year, 1,435 people responded to the survey. 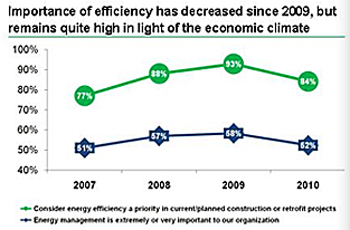 Sixty-five percent of the respondents said they are paying more attention to energy efficiency this year than last year, and 85 percent say energy  efficiency is a priority for new construction and retrofit projects.

However, the study also found that the importance of energy efficiency among decisionmakers has dipped compared to last year and 2008 (see Chart 1, right). Research partners say they take heart in the findings nevertheless because the responses show continued strong support for energy efficiency despite the economic downturn dubbed the Great Recession.

"We can find encouragement in these results," Johnson Controls President of Building Efficiency C. David Myers said of the report released on Monday.

Myers and Clay Nesler, Johnson Controls' Vice President for Global Energy and Sustainability, said the findings of this year's study are further evidence of a high level of commitment to efficiency by business leaders.

They also pointed to results showing that: 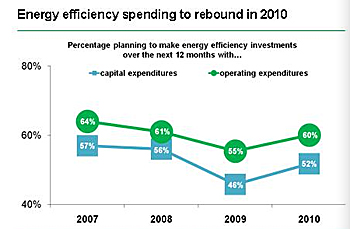 Other strong indicators of better times to come for efficiency investments and an even greater level of commitment to efficiency, Myers and Nesler said, were responses showing: 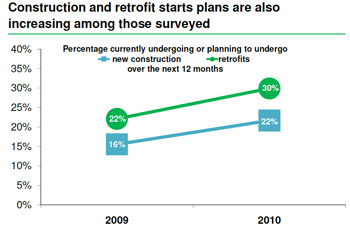 A webcast panel discussion about the report on Monday included Donald Young, communications vice president of IFMA, Peter Molinaro, vice president of Federal and State Government Affairs for Dow Chemical in Washington, D.C., and Jennifer Layke, director of the Institute for Building Efficiency, a new initiative of Johnson Controls to provide information and analysis of technologies, policies and practices for efficient, high performance buildings and smart energy systems around the world.

All three offered their perspectives on the report, which largely aligned with those of Nesler and Myers. In general, all said they were pleased, if not pleasantly surprised by the results -- comments that indicated less positive results were likely feared in the face of the prevailing poor economic conditions of 2009.

Molinaro presented his company as a case study in sustainability efforts, particularly in energy efficiency. His company has a goal of reducing energy intensity by 25 percent from 2005 to 2015. That goal was set after the company achieved its previous target: a 20 percent drop in energy intensity.

Overall, he said, his company has realized some $9 billion in savings as a result of a $1 billion investment in efficiency. Molinaro credited Dow's "strong senior leadership at top and down to [leadership] at production unit level" on sustainability issues as being integral to efficiency efforts.

Molinaro also noted that a corporate culture that supports seeking other perspectives has been key to Dow's success as well. One such piece of advice led to a further savings amounting to about $250,000 a year, after Dow stopped running a second (redundant) pump at a treatment plant.

Moral of the story: Broadly seek internal and external expertise. "Just because you think you're smart doesn't mean you're the smartest guy in the world," Molinaro said.

A philosophy along those lines underlies the new Institute for Building Efficiency, which aspires to be a resource that's global in scope as well as highly focused on "practical solutions that are innovative, cost-effective and scalable," the company's literature on the institute says.

In a move that dovetails the establishment of the institute, the Energy Efficiency Indicator -- a survey limited to North America in previous years -- goes international this year.

The survey is being conducted this spring in China, France, Germany, India, Poland, Spain and the United Kingdom, said Nesler. Results will be released later this year.

An executive summary of the 2010 Energy Efficiency Indicator report for North America is available from Johnson Controls. The full report is to be posted later.

JCI Guarantees $4.7B in Efficiency Savings for Public Projects

Healthcare Execs Deem Energy Efficiency a Higher Priority Than Other Execs Do: Report