A monastery in Madison, Wisconsin, that earned LEED-Platinum certification and a solar-powered Mormon meetinghouse in Utah are the latest examples of houses of worship that adhere to principles of sustainable design.

With green elements that include a geothermal heating and cooling system using 39 closed‐loop wells, each 300 feet deep, the Holy Wisdom Monastery of the Benedictine Women of Madison recently received a platinum green building rating. The designation is the highest of four certification levels available under the U.S. Green Building Council's Leadership for Energy and Environmental Design standards.

This week in Utah, the Church of Jesus Christ of Latter-day Saints showed off its new meetinghouse in Farmington, one of five being constructed according to green building prototypes under a LEED program that supports expedited certification of projects built according to pre-approved designs. The other meetinghouses are in Eagle Mountain, Utah, Apache Junction, Arizona, and Logandale and Pahrump, Nevada. The Apache Junction and Logandale sites also will be solar powered.

The projects by the Benedictines and Mormons are the most recent in growing efforts to green houses of worship in the U.S. and abroad.

Last year, the Jewish Reconstructionist Congregation of Evanston, Illinois, became the first to attain a LEED-Platinum rating. The synagogue also was named one of the Top 10 green buildings for 2009 by the American Institute of Architects and its Committee on the Environment.

To achieve a LEED-Platinum rating, the Benedictine sisters worked with planning, design and construction firm Hoffman LLC to right-size the new monastery and invest it and a remodeled maintenance building with green elements from their rooftops to their foundation.

The 30,000-square-foot, two‐story monastery and its detached, 4,000-square-foot remodeled maintenance building are expected to use 60 percent less energy and 40 percent less water indoors than conventional, comparably sized buildings. The monastery is half the size of its outmoded predecessor, which was razed with all but 0.25 percent of the demolished building being recycled or reused. The pipe organ and bells, for example, were restored.

The project came in at  $246 per square foot, according to the Benedictine sisters, who said, "Both the sisters and Hoffman take great pride in the fact that one of the greenest buildings in the United States was built for such a moderate cost."

Other sustainable design features include: 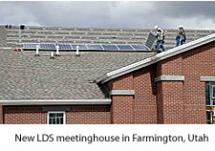 The LDS church says its new Farmington meetinghouse is expected to save $6,000 in energy costs annually. Landscaping and low-flow fixtures at the site are designed to cut water use by more than 50 percent.

Last year, the church directed that all new temples are to be built to satisfy green building standards for at least a LEED-Silver rating, the second level in the system that starts with basic certification and proceeds to silver, gold and platinum.

The church is also seeking LEED-Silver certification for its new 230,000-square-foot library, which opened last June. Housing the history of the church, the library has 10 main storage rooms kept at 55 degrees Fahrenheit with 35 percent relative humidity and two special rooms that are kept at minus four degrees Fahrenheit for color motion picture films, photographs other records.

In a news release on the Farmington site, the LDS church said that "around 75 percent of the technologies qualifying for LEED certification have been used in existing church buildings for several years."

More details about the LDS's conservation practices in building are available on the church's website.

Top image courtesy of the Benedictine Women of Madison. Insets by Steve Hall © Hedrich Blessing via AIA and © Intellectual Reserve Inc. via the Church of Jesus Christ of Latter-day Saints.