In an effort to help ease China's energy shortage and put tons of biowaste to good use, a 250,000-head cow farm in north eastern China will use animal dung to power four GE Jenbacher biogas engines and produce an estimated 38,000 MWh a year.

GE and operators of the new Liaoning Huishan Cow Farm, which is scheduled to begin operation in September, announced their plans today. When it is complete, the operation with be the largest cow-powered biogas project in the world.

Biogas projects using GE Jenbacher engines can be found at dairy farms in Punjab, India, and Waterloo, Wisconsin, and at chicken farms in Beijing and Penglai, China. 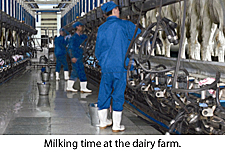 The operation slated for the Huishan farm complex in Shenyang, China, tops all the earlier projects.

Energy produced at the dairy farm would power an estimated 10,000 homes in Europe and considerably more in China, where average energy consumption per household is not as great, said Martina Streiter, the spokeswoman specializing in Jenbacher engines for GE Power & Water.

Energy generated at the dairy plant will be sold to China's state grid. The liquid byproduct from biogas production will be used on pasture grass and the remaining solid waste can be sold as organic fertilizer, according to GE.

All told, the project is expected to reduce carbon dioxide emissions by 180,000 tons year.

“The disposal and treatment of biological waste represents a major challenge for the waste industry,” said Xu Guangyi, vice president of the Liaoning Huishan Cow Farm, in a statement released today. “GE’s efficient, durable and reliable Jenbacher biogas engines will allow us to face that challenge by maximizing the use of an economical energy supply -- cow manure.” 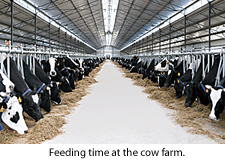