Despite the fact that most school years are winding down and admissions for the coming year are already underway, a new list from Bloomberg BusinessWeek magazine is ranking colleges and universities on their green business programs.

The latest rankings place Babson College, the College of William & Mary, and the University of Virginia at the top for their sustainability coursework for undergraduate business students.

They are part of a larger list of ratings of the nation's best business programs by specialty last week, originating from its annual rankings of top undergraduate programs published in March. The results are based on feedback from senior business students at 139 participating schools for their input on specialties ranging from ethics and strategy to accounting and marketing.

Sustainability continues to grow in popularity among undergraduate business students, Bloomberg BusinessWeek noted. Schools are responding in kind: Top-ranked Babson (pictured above), for instance, offers students the chance to live in a residence hall called the Green Tower, which is dedicated to sustainable living and business.

The school holds the Green Rocket Pitch, a competition that gives green-minded student and alumni entrepreneurs three minutes to bring their business ideas to life before a panel of judges. Babson, located in Wellesley, Mass., and listed at No. 15 in the overall rankings, also appears on six top-10 specialty rankings, including strategy and marketing. 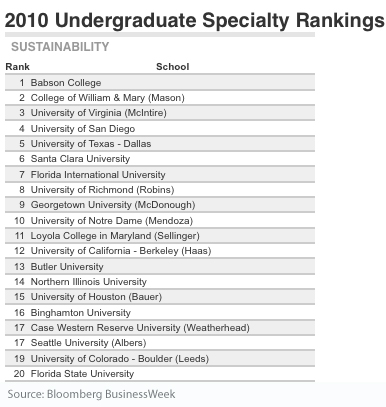 Second-ranked College of William & Mary launched a campus-wide initiative in 2008 during which its opened a new LEED Gold business building, formed a Net Impact chapter, and conducted audits of sustainability in its curriculum.

Third place University of Virginia offers a range of sustainability-focused coursework, including Environmental Economics, Managing Sustainability in the Developing World, and Elements of Ecology. Two of its buildings, Town Center Three and Printing and Copying Services, have both earned LEED certification, while the school has cut water consumption 26 percent over the last 10 years in the face of a 29 percent growth in gross square feet.

The release of the rankings comes within weeks of another highly-publized report from the Princeton Review and U.S. Green Building Council.

"The Guide to 286 Green Colleges," however, considered the overall sustainability performance of universities, not just business schools as Bloomberg BusinessWeek did.

In late 2009, the Green Report Card and America's Greenest Campus were launched in separate bids to rate the green efforts of U.S. colleges.

Meanwhile, the Aspen Institute's Business and Society Program publishes the annual Beyond Grey Pinstripes survey and ranking of MBA programs around the world, highlighting those that best integrate social issues and environmental stewardship into their curricula.

How the Top Undergrad Business Programs Perform on Sustainability

100 seeds for a sustainable future: Part 3