The 18- to 25-year-olds just entering, or poised to enter, the workforce aren't likely to be satisfied with shared "hotel-style" desk assignments, drab cubicles or windowless spaces that have characterized offices in the past, according to new research that could strongly influence space and energy efficiency strategies in the corporate world.

The highly educated, mobile and tech-savvy age group that falls within the demographic band known as Generation Y wants a workplace that's like them: urban, flexible, collaborative, environmentally sensitive and unconventional.

For them, work isn't just a place they go to from 9 to 5, then go home. They want an office and a work culture that's an extension of themselves and their home life -- a place that supports what they value -- and it better be green, according to a new study by Johnson Controls Inc. that has implications for employers, facility managers, human resources departments and building and office space designers.

Johnson Controls released the results of its research project OXYGENZ at the WORKTECH10 Conference in New York. The study is aimed at providing the first look at the workplace expectations of Gen Y -- a group often considered as transformers or invaders depending on one's viewpoint.

With the Baby Boomers retiring and millions fewer in the younger generations to replace them in the workforce in the U.S., U.K. and Western Europe, employers are trying hard to understand what makes Gen Y tick.

And many employers are apprehensive about what it will take to attract and retain the top talent from this pool -- and how their demands can be reconciled with those of the other generations in the workplace: Generation X, the Baby Boomers and those who preceded from them, the Veterans, said Marie Puybaraud, Johnson Controls' director of Global WorkPlace Innovation and the author of the report.

"i think a lot of people thought they would be very demanding," said Puybaraud. "They're scared about Generation Y in the workplace."

The OXYGENZ project queried 3,011 18- to 25-year-olds in the United States, U.K. Germany, India and China. Using a survey with office furniture firm Haworth and the IDEA design consultancy based in the United Kingdom, researchers also included almost 1,300 26- to 35-year-olds and nearly 400 36- to 45-year-olds for further context. In all, 5,375 people responded to online surveys in research conducted earlier this year.

Although their work habits and desires are closest to those of Gen X, Gen Y's approach to the workplace is unique. "There's a very different story coming across with this group," said Puybaraud.

"That they consider work as a social element in their lives comes through very strongly," she said. "For them the workplace is a social construction and work is social. They want emotional engagement and the sense of community. They choose employers [because] they are looking for meaningful work and opportunities for learning, because of quality of life issues and work colleagues."

That's not to say the group's work ethic is diminished. Given their preferences for elastic schedules and multitasking, their workday may span longer hours or pack in more activity. They may also spend more time around the office as well, given that they'd like snack and coffee bars on site -- and want places like clubs, cocktail bars and gyms nearby, if not in, the building. That said, employers can expect these employees will want to manage their duties and tasks to satisfy their needs for work-life balance.

Based on the study findings, employers can also expect that Gen Y:

Wants their jobs to be located in an urban area within an easy commute by foot, public transportation or by car. In the U.S., 79 percent said they prefer to work in an urban setting, 51 percent they'd get there by car (and for 34 percent that would be a hybrid vehicle) 18 percent would walk,15 percent would use public transit and 9 percent said they'd use a motorcycle or scooter.

Doesn't want a home-based work environment, although the group is highly connected via the Internet and high-tech gadgetry and could easily tap into work from home. "They want a place to go, and once they're there, they want their own desk and they want to be able to personalize it," said Puybaraud, noting that a large majority of Gen Y'ers want a desk they can call their own and less than a fifth would be happy sharing.

Wants office space to support collaboration, productivity and creativity. Forty-one percent said they'd prefer access to a team space, such as an area dedicated to their work group, and 32 percent said they prefer breakout spaces over conventional meeting rooms that are used by various work groups and usually need to be booked. Sixty-one percent want to work in natural light or with a combination of natural and artificial lighting.

Wants to be able to "see and feel the greenness in their workplace and mere compliance isn't enough," Puybaraud said.

The study provided further data on the green elements Gen Y wants to see at work: 70.3 percent said there should be recycling bins, 47.4 percent want water-saving fixtures and devices, 52.7 percent said stand-by modes or devices are musts for all electrical equipment, 71.6 percent said office printers should be shared, and 47 percent said solar panels should be on site.

"[Gen Y] preferences for an environmentally focused working environment are very strong; not only in the physical aspects of the workplace, but also in their way of working: flexible working, travel patterns, etc.," said the report.

Noting that all generations are looking for a "green deal at work," the report recommended that employers:

The findings are both interesting and challenging in that virtually every data point touches on steps and strategies related to sustainability, even though the survey questions aren't obviously posed as green subjects. 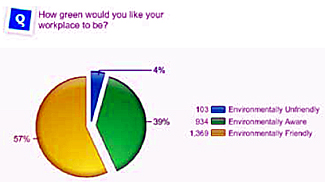 While a desire for urban office locations relatively near their homes, collaboration, energy efficiency and office design that supports creativity and productivity align with the aims of sustainable design, other Gen Y must-haves run afoul current practices.

For example, the Gen Y desire for their own desks that they can decorate with personal belongings flies in the face of efforts to right-size office space and streamline cleaning by having shared, standardized workstations and almost bare desktops.

And though their preference for breakout space and informal gathering spots is in keeping with some of the latest trends in office design, the preference for dedicated team space isn't.

To be sure, Puybaraud said, the study findings pose challenges for employers, facility managers and human resources departments, but they are not insurmountable. It will take some creativity on the part of companies and some flexibility on the part Gen Y'ers, who say they possess that quality in great quantity.

"Just because they want their own desks doesn't mean they'll get one," said Puybaraud. 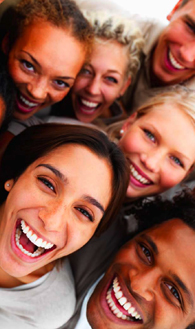 As a compromise, companies could assign new employees to their own desk for their first couple of years, then transition them to shared space later. Or Gen Y'ers might have a dedicated desk or team space for part of their workday and complete other tasks elsewhere in the office the rest of the time.

Other solutions and further study findings are available in the 118-page OXYGENZ report (pdf), which is available from Johnson Controls for download without charge.

Bottom line, the report said, Generation Y is "full of contradictions … They think like entrepreneurs and value relationships, are tech savvy and creative, and are environmentally conscious and mobile. They will in the future place a high premium on job security and they apparently currently job-hop. They are value driven and money-grabbing (due to being saddled with high student loans). They are conservative and non-conformist."

For businesses looking for a constant point in interpreting Gen Y at work, Puybaraud said: "At the end of the day, the thing to remember is that for them going to work is an experience ... and extension of themselves ... and part of their overall life experience." And smart employers will find ways to integrate that contemporary view into a traditional workplace.

Real-World Tips for Instilling Green Values in Your Corporate Culture

The Many Facets of Green Building Innovation

A re-imagining of the built environment, for the better