The largest soccer stadium in Europe, Nou Estadi del Futbol Club Barcelona, has 900 waterless urinals. Bank of America Tower in New York City has 200. The Rose Bowl Stadium, an early adopter of the technology, installed 259 in 2002. And the Universal City Hilton retrofit all its urinals with waterless fixtures.

O'Hare Airport had a few but removed them. Chicago pulled some of its waterfree urinals in City Hall and kept others.

What makes the technology popular in some places and not others, even in the same building? In many cases, it comes down to installation and maintenance.

Done properly, waterless urinals regardless of the maker can save thousands of gallons of water a year. Done wrong, they'll probably still save some water, but they're likely to stink.

Written comments on our earlier coverage of water-saving toilets, including waterless urinals, usually run neck-and-neck among users who like them and those who don't, with the biggest complaint being odor. 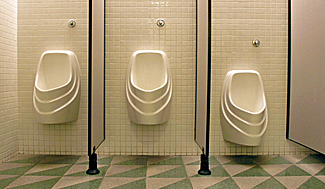 Green design and building sources we spoke to also lined up in two camps: Those who say the fixtures perform well when used and maintained properly, with opinions differing on whether maintenance is easy or hard, and those who view the technology guardedly -- neither endorsing nor rejecting it -- but saying that property owners have to keep their building occupants' habits and perceptions in mind when considering what fixtures to install in restrooms.

For example, a planning executive said that's why one of his company's premier sites has waterless urinals for staff and low-flow toilets in visitor areas. Public opinion about the devices have been mixed and, regardless of improvements in technology and design, his company didn't want anything to detract from the visitor experience.

GreenerBuildings.com asked Daniel Gleiberman, vice president of government affairs for Falcon Waterfree Technologies, and Randall Goble, the company's vice president of marketing, for their advice on the care and feeding of waterless urinals. The firm manufactured the products in almost all the instances described above. 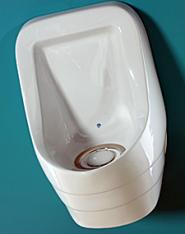 "A waterfree urinal goes into a regular plumbing system, but if it is not installed properly, you're not going to get proper performance," Gleiberman said.

Maintaining, or restoring, the necessary slope for the urinal line is a key part of the process. "An existing urinal line should have a 2 percent slope -- it's required," Gleiberman said. "But we know from retrofits that sometimes for flush urinals it was never there or the line had settled."

To address the problem, Gleiberman and Goble said Falcon developed "pipe-in-pipe technology" that comes with their products and is part of their adaptive drain coupler to ensure a downhill slope in the horizontal pipe nipple.

Installing the fixtures in appropriate pipe systems is also important. "We know that waterfree urinals and copper pipe systems are not optimum," Gleiberman said.


The city of Chicago found that out after it installed waterless urinals in City Hall as attorney Shari Shapiro, a GreenerBuildings guest writer, noted in her Green Building Law blog earlier this year. The city removed the waterless urinals in a high-traffic restroom close to council chambers because corrosion in the copper pipes created a powerful stench. Other waterfree urinals in a restroom near the mayor's office were left in place because that facility is not as heavily used and did not present a problem.

Representatives for the city declined to elaborate on reports of their experiences with the fixtures. So did a press spokeswoman for O'Hare Airport, which used waterless urinals briefly five years ago but yanked them after coffee and other substances poured into the fixtures caused clogs and odor problems.

If the fixtures are installed properly and problems arise, facility managers should determine whether best practices are being followed for cleaning and maintenance. 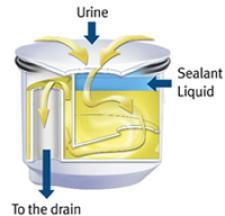 Some facilities managers complain that maintaining waterfree urinals is too complex for maintenance staffs to master. But Gleiberman counters such assertions by saying that learning to care for waterfree urinals "isn't difficult, just different."

"Some people try to say there's too much maintenance and too much thinking involved," he said. "I'm sorry, that's simply not true. I think there is more hyperbole about cartridge change-outs than reality bears out."

The cartridge is the core of the Falcon's workings, diagrammed above. A biodegradable sealant floats inside the cartridge. Urine penetrates the sealant and enters the cartridge. The sealant provides a barrier to odor while the urine passes through the system. Cartridges usually are changed three to four times a year, with frequency varying based on level of use.

When cleaning a restroom equipped with traditional flush toilets, maintenance people typically dump a bucketful of wastewater used during cleaning into the bowl of the last toilet in the line. If the bucket is emptied into a waterfree urinal, the force of the water can dislodge or damage some cartridges. It can also displace the sealant, Gleiberman said.

Falcon designed a cartridge that locks into the base of the urinal to discourage tampering and prevent the cartridge from being dislodged accidentally.

And just as important, Gleiberman and Goble said, the company provides educational materials in a DVD, charts, several languages and online to train maintenance people how to clean waterless toilets. 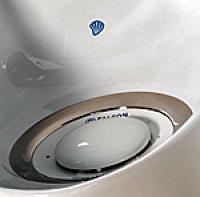 Once the process is explained, "it's actually easier to clean a waterfree urinal," said Goble. "It's a very simple fixture to take care of."

"Any person who is trained on a housekeeping staff can learn how do this," said Gleiberman.

A company should determine whether its custodial teams need a refresher session and if the fixtures are being used properly. In general, only liquids that have passed through the human body first should go into waterless urinals. If cleaning and use (or abuse) of the fixtures aren't issues and problems still persist, businesses should contact their vendor's technical support staff to help them root out what's going wrong.

In addition to developing the pipe-in-pipe technology for installation and the lock-in cartridge, Falcon devised another improvement for its urinals in response to feedback from customers: the target.

After much study, Falcon redesigned angles inside its urinals and plotted where users should aim to avoid splashing. The spot is marked with a drawing of small blue seashell. Its position varies depending on the product model.

How to Make Every Drop Count